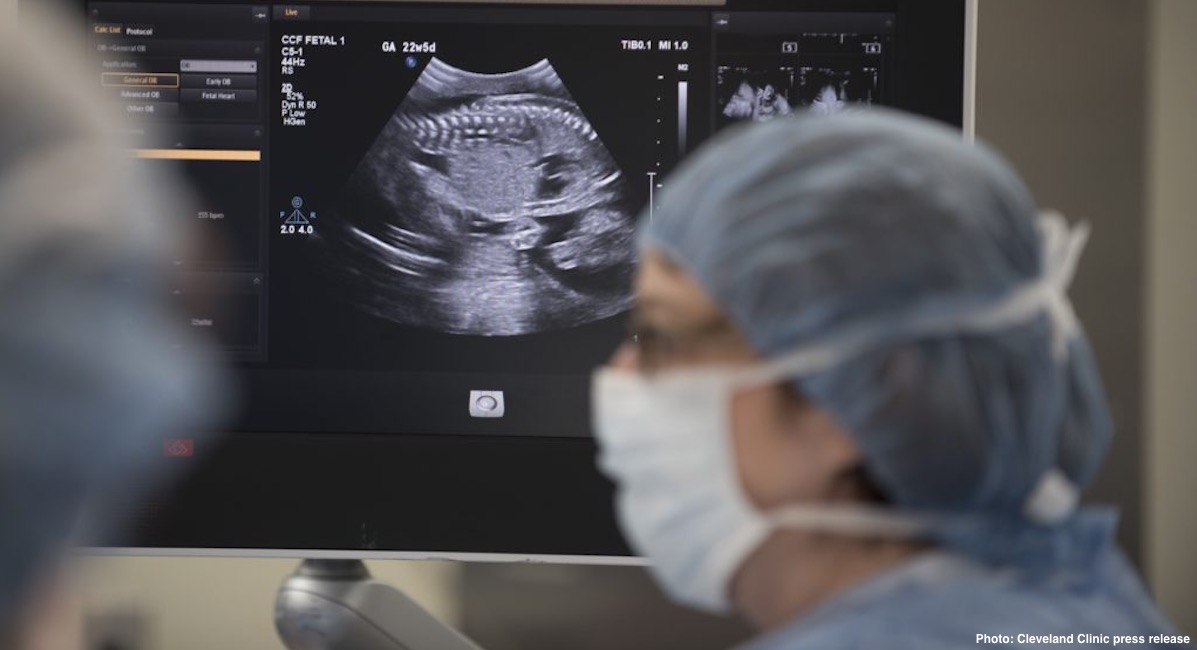 In February, a surgeon at world-renowned children’s hospital, Cleveland Clinic, performed Northern Ohio’s first-ever surgery to correct spina bifida on a baby still in the womb. While preterm labor and birth are the most common complications of surgeries done on babies still in the womb, the little girl made it nearly to full-term after having surgery just before 23 weeks gestation. She was born on June 3rd at almost 37 weeks.

Surgeon Dr. Darrell Cass said of the surgery, “By successfully repairing the defect before birth, we’re allowing this child to have the best possible outcome and significantly improve her quality of life. There are different measures of quality in determining success for fetal repairs and in this particular case, all metrics for maximum quality were achieved.” According to WGN 9:

Fetal surgery for the birth defect is currently an option for parents in about 20 hospitals in North America after becoming clinically accepted in 2011. Prior to 2011, there were only four fetal surgery centers in the world. Cass was the director of one of them.

Cass has performed more than 160 fetal surgeries since 2002 and after 17 years as the co-director of Texas Children’s Fetal Center in Houston he joined the Cleveland Clinic to begin the fetal surgery program. He and his team spent more than a year preparing for their first surgery.

Actual video footage from the June 3rd surgery is here.

Spina bifida occurs when there is a problem with closure of the neural tube at the bottom of the spine leads to the spinal cord and surrounding nerves being directly exposed to amniotic fluid. Myelomeningocele, one of the two most severe forms of spina bifida, occurs in 3.4 of every 10,000 live births in the United States each year, and around 1,645 babies are born with some form of spina bifida annually. Spina bifida has been linked to low maternal levels of both folic acid and/or Vitamin B12 at the time of fertilization, as well as to maternal obesity.

Surgery to correct spina bifida in utero is typically done during the second trimester, because the longer the fetal nerves are exposed to amniotic fluid, the more damage is done. Lifelong impacts of untreated spina bifida may include paralysis of the legs, from either the knees or waist down, inability or impaired ability to urinate requiring a urinary catheter, and brain damage as well as water on the brain, requiring a permanent brain shunt.

However, in-utero surgery has led to significantly improved motor function and significant reduction in the number of babies requiring brain shunts after birth. During the surgery, through an incision less than two inches wide, doctors use ultrasound guidance to open the mother’s uterus just above the problem area on the child’s back. They stitch together several layers of tissue, effectively covering up the defect. The mother’s uterus is then closed back up.

Live Action has reported here, here, here, and here on the miracle of prenatal surgery to reduce complications of spina bifida. Incredible advances in technology have also led to the successful surgical treatment of cerebral palsy, fetal hypothyroidism and hyperthyroidism, and cystic fibrosis. Improved surgical options for poor prenatal diagnoses and improved imaging of babies still in the womb serve to underscore the well-known Dr. Seuss quote: “A person’s a person no matter how small.”

The successful surgery at Cleveland Clinic drew praise from pro-life legislators and organizations like Senator Mike Lee of Utah and the March for Life.

Congratulations to heroes at @ClevelandClinic. A monumental achievement for medicine, and all humanity https://t.co/XDTWAxB4C9

Wow! This is what’s possible when science & technology are used to enhance life, rather than end it. https://t.co/DC95HQnPkC