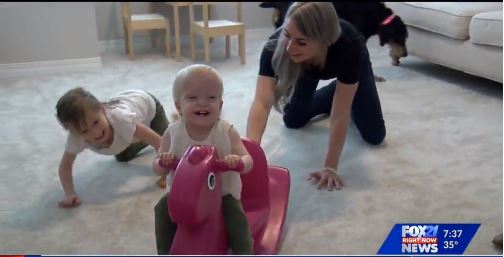 A one-year-old girl with myeloschisis, the most severe form of spina bifida, is now thriving thanks to doctors who performed surgery on her when she was still in her mother’s womb.

Little Peyton’s parents, Kyle and Alison, were 19 weeks pregnant when doctors told them that their baby girl had the condition which caused her spinal cord to be exposed to amniotic fluid, leaving her nerves susceptible to damage. She was at risk of developing hydrocephalus – fluid on the brain – and the condition could cause the inability to walk along with other health issues.

“That is probably the hardest thing you can hear,” Alison told Fox 21 News. “It felt like someone had punched me in the chest because it was just, I had no idea it was coming, and so it was pretty hard to hear.”

While some parents decide to abort when they hear such a diagnosis, Kyle and Alison decided to “give her the best chance that we could.” They were referred to the Colorado Fetal Care Center at Children’s Hospital of Colorado where they met Dr. Ken Liechty, the pediatric fetal surgeon who would perform surgery on their preborn baby girl.

“In this procedure, our highly specialized team goes in and opens the uterus and operates on the fetus, and that’s done early in gestation, around 23 to 26 weeks,” Liechty explained.

Peyton, though still a preborn child – a fetus – at the time, was not simply treated as part of her mother’s body, but was rightfully treated as a human being, as a patient, who was in need of specialized care.

“They cut your belly open and they bring her little back up and they hold her, and they don’t completely take her out of the womb,” said Alison. “They just hold her and patch it and sew it and put her back in, and then somehow put everything back together.”

Kyle and Alison were shocked at the idea of it all, but they knew it was going to give Peyton a fighting chance.

“If you do nothing and these babies are born, about 90 percent of them are going to need what’s called a ventriculoperitoneal shunt, which goes from the ventricles in the brain down into the abdomen,” said Leichty. “So it’s a piece of plastic that carries fluid from the brain to the abdomen, and these babies need to have these revised repeatedly… Once you have it, you have it, you don’t get away from it.”

Alison calls the day of Peyton’s diagnosis “the worst day” of her life, but says “it gets so much better from there.”

“It’s not a fun day, obviously,” added Kyle. “But after you’ve lived through it, it’s kind of like ‘oh, that was not that bad.'”

Peyton did well in surgery, and now, nearly two years old, she has not needed a shunt. “Glory to God, she is almost gonna be walking soon,” said Alison.

“She’s a miracle baby,” said Kyle. “I mean, you wouldn’t know the difference from any baby, really.”

Her mother calls her a “spitfire.”

“She’s very loving and sweet,” said Alison, “but she also has determination when she wants to do something, and so really whatever she wants to do, she’s going to do. I really believe that.”