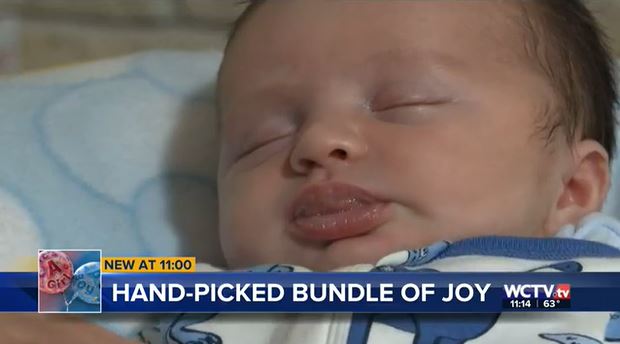 A couple in Florida has welcomed a baby boy in February whom they adopted as an embryo. Baby Noah had been frozen as an embryo for 15 years and was donated to an embryo adoption agency. He was then adopted by Amanda and Jeremy Lewand.

The couple had struggled with fertility issues and decided to adopt an embryo after four years of attempting to conceive. They are hoping to inspire other couples who are dealing with similar fertility struggles.

“It was all worth it,” said Amanda. “After going through infertility, we had longed for a child so bad.”

Unbeknownst to the couple, Noah had been waiting for them for 15 years. “He was frozen in August 2005, so he was 15 years old when he was put inside me,” said Amanda.

Noah spent a week in the neonatal intensive care unit after his birth but is healthy and doing well. His father said he is “a very easy-going baby.”

The couple said the opportunity to adopt an embryo gave them the “chance to experience pregnancy…” They knew that if they didn’t try they would regret it, said Jeremy.

Children like Noah are considered the “leftover children” of the fertility industry, which creates more children than the biological parents intend to give birth to when undergoing in vitro fertilization. There are an estimated one million children sitting frozen in the United States, either waiting to be defrosted or perpetually frozen as their parents don’t know what to do with them. In fact, about five to seven percent of those embryos are considered to be abandoned by their parents. In 2020, a couple welcomed a baby who had been frozen as an embryo for a record 28 years.

The number of frozen embryos in the United States reveals a significant problem that exists in the fertility industry. Couples, so desperate to have a biological child, turn to IVF to make that wish come true. But the process involves creating human lives that are often destroyed because they aren’t perfect, or freezing human lives at the embryonic stage and leaving them frozen for an undefined amount of time at the minimum cost of $500 per year. Parents can choose to destroy them, donate them to research, transfer them to the mother’s uterus during a time in her cycle when she is unlikely to get pregnant (ensuring the children won’t survive), or donate them to other couples.

In addition to the one million perpetually frozen embryos, 1.7 million human embryos have been thrown away, according to a 2012 study.

The National Embryo Donation Center has facilitated more than 1,000 births through embryo adoption and the Snowflakes Embryo Adoption Program has helped couples welcome 770 children through embryo adoption. It is estimated that of the two million embryo transfers from 2000 to 2016, about 16,000 were donated embryos.

There is a severe lack of regulation surrounding the fertility industry, which turns innocent human lives into commodities to be created and destroyed based on the wants of adults. It’s hard to reconcile that the fertility industry is a nearly $6 billion industry that exists to create life while just one abortion business — Planned Parenthood — makes about $200 million from abortion alone every single year.

Human life is not a product to be bought and sold. Yet the abortion and fertility industries treat it as such, leaving the broken and frozen bodies of babies in their wake.