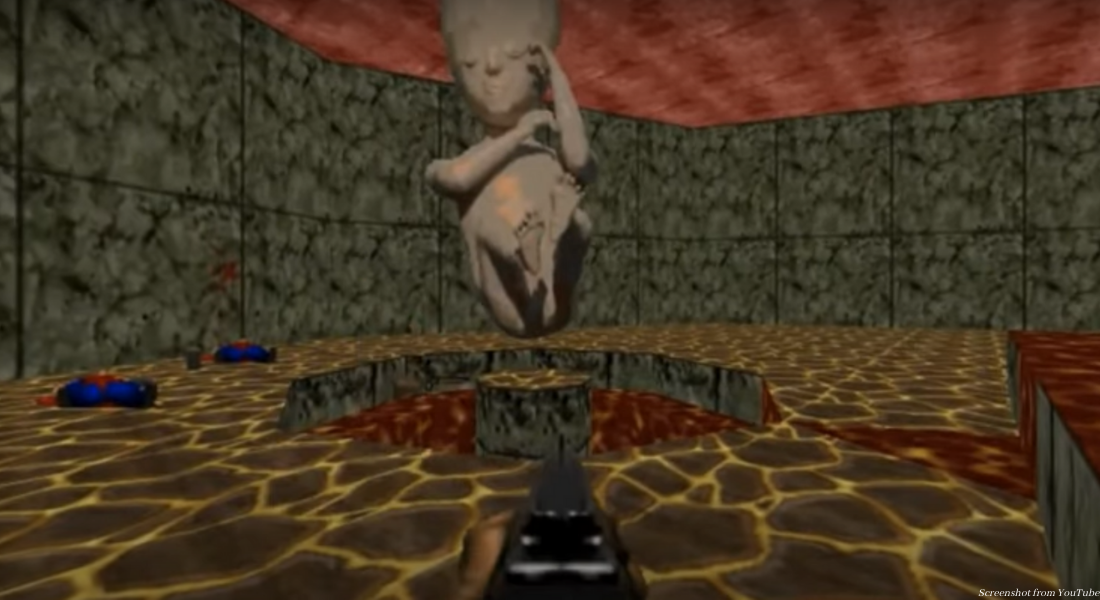 A new video game created by a female Argentinian abortion activist has players hunt down and kill a preborn baby, using a shotgun. Modified from the game “Doom,” players kill police officers, priests, and pro-lifers before ultimately shooting a large model of a preborn child to death.

Titled “Doom Fetito” in Spanish, or “Little Fetus Doom” in English, Florencia Rumpel is a game developer who wanted to protest the country’s pro-life laws, which allow abortion only when the mother’s health is said to be in danger (though abortion is never actually medically necessary). Tragically, the government seems to be quickly moving towards legalizing abortion. A large model of a preborn child was carried in a pro-life march earlier this year, and the image became Rumpel’s inspiration for Little Fetus Doom.

According to the website, the game is meant to agitate for “the right to legal, safe and free abortion.” The way to do this was evidently by creating a game in which — if all the defenders of the preborn baby are defeated — players face a “boss” fetus which they repeatedly shoot and kill with a shotgun. They are then greeted with a message which reads, “You defeated little fetus! Give this misoprostol to those in need so they can defeat it too!”

Catherine Robinson, a spokesperson for Right to Life UK, criticized the harsh violence in the game being used a form of activism.

“The game involves killing pro-life women before shooting to death an unborn baby with a shotgun at the end. The ‘game’ openly encourages active hostility against pro-lifers – they are first beaten with fists before later being shot – as well as animosity between mothers and their unborn children,” Robinson said in a statement. “Once the player has shot to death the unborn child with a shotgun, the game displays a message encouraging them to use the abortion drug misoprostol to ‘defeat’ unborn children in real life. While some pro-abortion campaigners may want to distance themselves from this sickening game, in reality it reveals, in a gruesome way, exactly what abortion really is – the deliberate ending of an unborn child’s life. Abortion may be performed by highly paid staff in an abortion chain clinic owned by Marie Stopes or BPAS, but at the end of the day, abortion is always and everywhere the ending of an innocent baby’s life, just as is glorified in this vile game.”

According to Right to Life UK, even some pro-abortion advocates find the violence of the game to be too much. “Very much pro-choice myself but I feel like creating a violent shooting video game where the goal is to abort a giant fetus with a shotgun might be sending the wrong message,” one person reportedly wrote on gaming website Kotaku.

READ: Abortion in video games: The next frontier of entertainment?

Sadly, however, abortion-themed video games are nothing new.

On a podcast, pro-abortion feminist tech writer Laura Hudson and game developer Mary Flanagan discussed inserting abortion into video games, highlighting a Tamagotchi-style game called “Fantastic Fetus.” In it, players choose a character to go through a pregnancy, in which they need to be fed, kept happy and clean, given medicine when they’re sick, and pray when they’re sad. Players also get to create their own “fantastic” baby — but if anything goes wrong, the mother will die. At the end of the pregnancy, regardless of how well the mother is taken care of, the baby ends up with a life-threatening birth defect, like hydrocephaly or twin reversed arterial perfusion. The game ends with a message about the need to keep abortion legal, with the insinuation being that pregnancy is deeply dangerous, and mothers can end up with a “defective” baby.

Another video game was called Choice: Texas, which attempted to portray the difficulty of obtaining an abortion in the pro-life state. Yet another pro-abortion video game was described as a “choose your own adventure” game, where players make decisions about an unexpected pregnancy. Yet each choice is clearly stacked against choosing life, with a quick abortion continuously being presented as the best option. Players who choose life end with the mother needing a late-term abortion, or sick, in premature labor, and with crushing debt.

It seems like an odd choice, to use a violent video game as a way to convince people that abortion should be legal. Argentina, for example, is a heavily pro-life country; in the United States, people overwhelmingly favor heavy restrictions. A disturbing, violent video game is not going to manipulate anyone into suddenly supporting abortion, and will only be lauded by pro-abortion extremists themselves.