On August 2, the Seventh Circuit U.S. Court of Appeals upheld an Indiana law mandating that medical professionals report any complications resulting from abortion procedures to the state. The ruling comes about three years after Planned Parenthood sued the state over the law.

Senate Enrolled Act No. 340 was signed into law in 2018 and defines “abortion complication” as “any adverse physical or psychological condition arising from the induction or performance of an abortion.” It requires that doctors or other medical providers report 26 types of abortion complications including uterine perforation, cervical perforation, failed abortion, hemorrhaging, infection, shock, cardiac arrest, psychological effects, or preterm labor. Failure to do so would classify as a misdemeanor punishable by up to six months in prison and $1,000 in fines.

READ: Indiana abortions increased in 2020, with most done by abortion pill

“Planned Parenthood likes to claim that abortions never harm women. If that was the case, why do they oppose this common sense law?” said Mike Fichter, President and CEO of Indiana Right to Life. “…[D]oes Planned Parenthood have something to hide?” 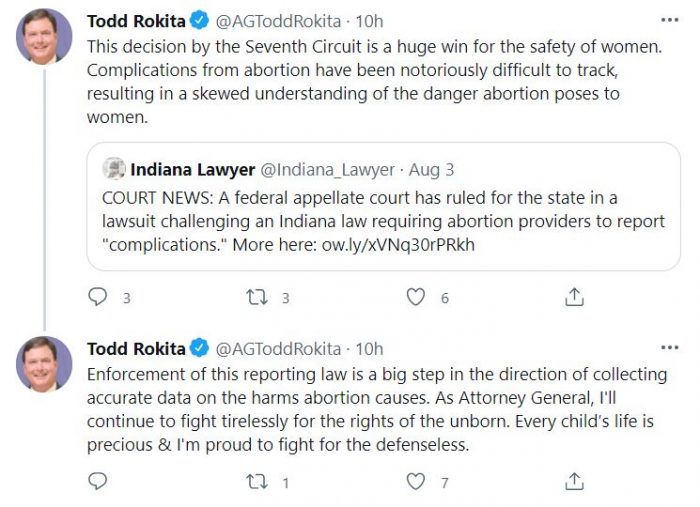 “Complications from abortion have been notoriously difficult to track,” said Indiana’s Republican Attorney General Todd Rokita, “resulting in a skewed understanding of the danger abortion poses to women.” He called the ruling “a huge win for the safety of women” and vowed to continue to “fight tirelessly for the rights of the unborn.”

There were additional complaints by Planned parenthood concerning the law that were not addressed by the appeals court and which will now be handled by the lower court. According to The Christian Post, that includes the claim that “the Complications Statute is both irrational and violates due process.”