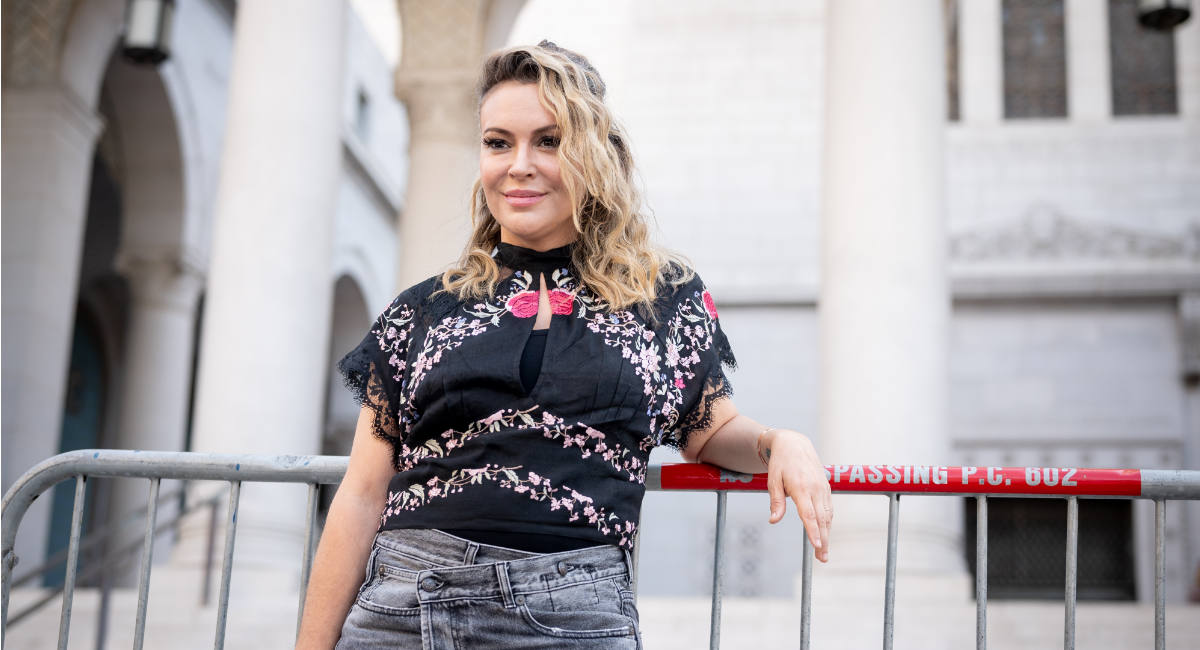 During an episode of the podcast “Me Becoming Mom” with host Zoë Ruderman, actress and outspoken abortion advocate Alyssa Milano revealed the emotional trauma that she experienced after undergoing two abortions in the same year when she was in her 20s.

During the podcast, Milano, now 48, also revealed that she felt conflicted about abortion due to her Catholic faith when she learned she was pregnant twice in 1993, but believed she had to abort both babies because she “wasn’t equipped to be a mother.” This is a common pro-abortion, anti-feminist attitude that leaves women feeling defeated, propelling them towards abortion.

When she became pregnant later, she miscarried. She admitted, “I definitely had this moment of, ‘Well, I’m being punished [with miscarriage],’ basically for abortions in my 20s. It took a while in therapy to realize that that was something that I was putting on myself.”

She also mentioned that she feared for the two children she gave birth to — Milo, 10, and Elizabella, 7, with husband David Bugliari — thinking that something bad would happen to them because of her past abortions.

“I always felt like, ‘What if something happens to these two little beings that I love so much? And is there a world in which they’re taken away from me for whatever karmic resolution needed to happen?” she said.

Other women who have undergone abortions have shared similar emotions. One study found that 50% of women who suffer abortion-related trauma were scared they would be “punished” for their abortions by way of harm coming to their other children. As a result, many women hold back their love and fail to bond with their future children because they fear that if they love these children “too much,” they will lose them.

But instead of receiving reassurance that she is not alone, and that this fear is a common response to the trauma of abortion, Milano was taught in therapy that the abortion wasn’t to blame for her emotional struggles, she was. She was told she had put the fear of punishment (from God, or in her words, karma) on herself. In a sense this is true, but her emotions surrounding her miscarriages and the irrational fear of harm to her other children are a common manifestation of abortion trauma. By ignoring these feelings and continuing to attempt to justify abortion, Milano is (perhaps unintentionally) leading other women into the same trauma that she suffered.

There is a reason why women feel they could be punished for their abortions — because they know, in their hearts, that abortion is wrong — and that they deliberately chose death for those babies.

In addition to fear of harm for other children, there is validity to the idea that previous abortions may cause struggles with future fertility. It is not clear what caused Milano’s miscarriages years after she had two abortions, but there is a clear line between abortion and the potential for future miscarriage.

One risk of abortion is Asherman’s syndrome, marked by uterine adhesions and scar tissue in the uterus that can be left behind from a previous abortion. It can cause both infertility and miscarriage. According to PubMed, Asherman’s syndrome “usually occurs following curettage of the pregnant or recently pregnant uterus.”

During a first trimester surgical suction aspiration abortion, an abortionist uses a curette — a long-handled curved blade to scrape out the uterus after the baby has been removed, to ensure that no body parts or pieces of the placenta are left behind. This has long been the most common way to abort a baby in the first trimester, though the more-dangerous abortion pill has recently skyrocketed in popularity. Risks of suction aspiration abortion include potential damage to the cervix or uterus, leaving women at risk for future miscarriage.

Sadly, Milano buys into the lie that women need abortion. On finding out she was pregnant in her 20s, she said, “It was devastating. I was raised Catholic and was suddenly put in conflict with my faith.” But she said she knew in her heart that she “wasn’t equipped to be a mother” and therefore “chose to have an abortion.”

A few months later, after learning she was pregnant a second time, Milano had another abortion, likely still feeling ill-equipped to be a mother.

This is a lie that sends countless women to the abortion clinic when abortion isn’t what they want. Milano herself said she didn’t want the abortions, but felt that she “needed” to go through with them because she believed she was incapable of motherhood at the time. She compared the idea of not wanting abortion but needing abortion to “most health care.” But this is an odd comparison. Health care should care for the health of human beings, not deliberately kill them. No one needs an abortion, as it is not medically necessary to deliberately kill another human being. But most people do want and need actual health care because it keeps them healthy.

Even Milano, who by the time of her abortions had already been a well-known and successful actress, couldn’t escape the pervasive idea that she had no other choice but to kill her child.

The truth is that women are capable of being mothers. Sometimes they will need help, as do all mothers; some may need more help than others. This is normal. Telling women they should kill their preborn children because they are incapable of caring for a child (or another child) is not normal. But helping women through unplanned pregnancies and the early stages of motherhood doesn’t make money. Selling abortions does.

A 2017 study in the Journal of American Physicians and Surgeons found that nearly 75% of women seeking post-abortion counseling said they felt subtle forms of pressure to have an abortion. Many of these women suffered poor psychological health after their abortions, though the majority of them were psychologically healthy prior to the abortions. These women reported symptoms of depression, guilt, shame, regret, low self-esteem, and anxiety, as well as thoughts and attempts of suicide.

This is information the media suppresses or dismisses because it reveals the truth that abortion isn’t empowering. It is an act of killing in a time of desperation.