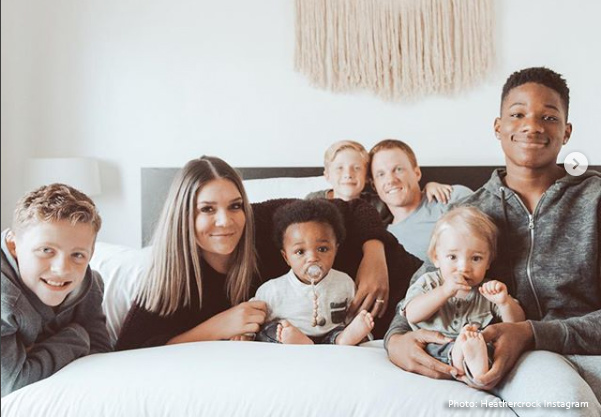 Heather Crockett Oram was just 13 years old when she discovered she would never be able to have biological children. As a baby, her ovaries had been removed because they had not formed properly — and almost immediately, knew she would adopt children one day. “As I grew older my biggest fear was to have to someday tell a prospective spouse that I would never be able to birth our children,” she said in an article she wrote for Love What Matters. “Then I met Jason. He was a single dad to 2 wonderful little boys and we fell head over heels.”

She cried as she told him, but he told her it didn’t matter, and he would happily pursue adoption with her.

“Last June we were approved to adopt,” she said. “After a lot of research, we didn’t want to go through an agency. There were too many shady ones out there and they cost close to $55K when all is said and done. So we set out to do it on our own.” They instead used the internet and social media to find biological parents looking to give the gift of adoption, and at first, many of the responses they got were scams. “Then we got a message on Facebook,” she explained. “A young woman emailed us telling us that her friend was pregnant and looking for a family.”

READ: After two generations of adoption, family finds incredible way to give back

They spoke with the mother over the phone for weeks, but she never sent them proof of her pregnancy. Then, another mother contacted them, and wanted to meet.

Two days later we met in a little diner 20 minutes from our house. Just when we thought she had stood us up, in walked a very pregnant girl and her mom. We hugged and she showed us the ultrasounds of a little baby boy. He then started kicking and she had me feel her belly. Towards the end of breakfast she asked us how we felt. She then asked us if we would adopt her baby and love him forever. Jason and I sobbed. In the middle of a diner. In complete shock. 3 weeks later we stood there and watched as our son Andy was born. I was the first to hold him and kiss his tiny hands. That was October 30th, 2017.

After taking Andy home, Oram continued to keep in contact with the first mother they had been matched with, who told them she had found another family for her baby. Still, they continued speaking, and in January, they got a shocking phone call. “She told me she had just told the other family she did not feel good about them adopting her baby,” Oram said. “She then told me that she knew this baby was supposed to be ours. I stood there holding my 3-month-old baby boy and she sent me pictures of an ultrasound of the baby boy growing in her stomach. I was speechless. But I also knew. Deep down I knew.”

Hello everyone! I wanted to take a second and introduce myself. My name is Heather. I am a 34 year old working mom who has 5 boys, a ginger husband, and has been through some crazy stuff. I definitely wouldn’t call my life the norm, but I try to keep it as real as possible and talk about things us regular folk can relate to. A couple of years ago I received the worst phone you can ever receive. My mother had died. On Christmas Day. 18 months later I sat and held the hand of my little sister as I made the decision to take her off of life support and watch her take her last breath. Right after my mother died I decided to take care of myself. I was working as a nurse in the ER, going to graduate school full time to become a nurse practitioner, and simply trying to not have a nervous breakdown. Over the next 10 months I lost 82 pounds through good old fashioned diet and exercise. No surgery. No pills. That’s when @heathercrock became more than just my 200 friends who felt obligated to follow me because they knew me in real life 😆 Over the last couple of years people have watched as I have battled through weight loss. Graduated with my Master’s Degree. Found Jason. Fell in love. Got married. Became a bonus mom. Talked about infertility. Got approved to adopt. And helped us share our story in hopes of finding a baby to call our own. People have experienced our joy as we watched Andy be born, followed by the shocking (to us all) announcement that we would also be adopting Ellis only 4 months later. A few short months after that we then flew Ellis’ biological brother out to visit and because of certain circumstances at home he has now been living with us for the last 6 months. As I said, my life has definitely not been the norm. But my hope is that by telling our story I can relate to or help at least one person along the way. We will always have our highs and our lows. I am not just here to post a highlight reel and make you think my life is perfect. Because no one’s is. If you get the chance, you can read our adoption story over at @lovewhatmatters or click the link in my bio ☝🏼 I want to thank you all for following along and the love and support. Xoxo, @heathercrock

After much prayer, the couple decided to welcome another newborn into their family, just months after adopting Andy. They flew to Missouri and met the birth mother and her three children, just before she was scheduled for an induction. “We all instantly connected,” she said. “The next day we stood at her bedside and watched as our son Ellis was born. Jason even got to cut the cord. I was first to hold him and again kiss his tiny hands.”

READ: Family welcomes third baby by adoption: A child is ‘the most precious gift’

Since then, they have maintained open adoptions with both of their sons’ biological parents. “We talk and send pictures and recently met up with Andy’s birth parents at a nearby park,” she explained. And doing so led to another surprise.

Four months after Ellis was born we had a strong feeling to reach out to his birth mom and she had mentioned they were in a rough spot. Jason and I decided to then fly her oldest child out to visit us for 10 days so he could spend some time with Ellis. Sean had never been on a plane or been that far away from his home. We instantly fell in love with this sweet boy. 10 days eventually turned into all summer.

At the end of summer, he asked if he could to watch his new friends try out for football. Before we knew it, he was talking to the coaches and asked if he could try out. Sean made the top football team for 8th grade in his first year ever playing an organized sport. He called his mom and asked her if he could stay. She said whatever would make him happy. Sean has now been living with us for 6 months and his football team made it all the way to playoffs.

All together, the Orams accepted three children in less than nine months into their family, and she is thankful for the family she now has.

This trip has been full of firsts. Today we got to watch Ellis and Sean experience the ocean for the first time. I cringed knowing the amount of sand that would enter every crevice of their body the minute we set them down. But it quickly melted away as we watched them splash and play in the water for hours. This was Andy’s second time feeling the sand beneath his toes and he didn’t want to leave. We then walked the boardwalk. Ate some tacos. I showed them my old house on Mission Beach. And we rode the roller coaster at Belmont Park (watch my stories for Sean’s reaction to his first roller coaster ride!). All in all I would say it was the perfect day. Now, how do I get them to stay little forever? In the words of Peter Pan, ‘Never Grow Up’. Xoxo, @heathercrock ❤️ #adoption #openadoption #family #love #brothers #andyandellis

“I have not given birth to any of the 5 boys we have at home right now,” she wrote. “But I am their mom. We have since finalized both Andy and Ellis’ adoptions. They are officially Orams. We share custody with our oldest two boys and their mom. And we don’t have a timeline as to how long Sean will end up staying. Family does not have to be made from blood. It can come in many shapes and sizes. Love is all that matters. So here we are. A current family of 7. We love each other deeply. And go on a lot of adventures together. It is not always easy. There have been many ups and downs and everything in between. But we wouldn’t trade it for the world.”