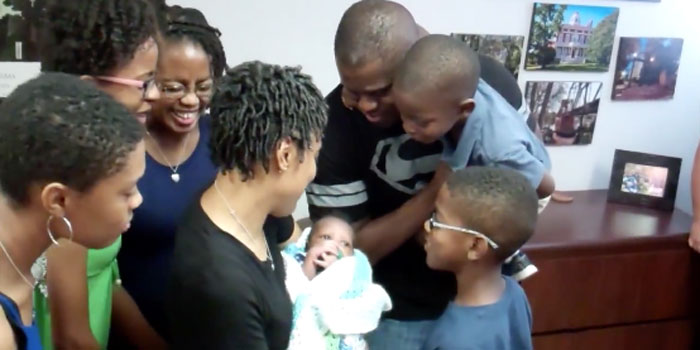 Sean and Talya Hooker believe adoption is “a ministry focused on the needs of the child and led by the Lord for His glory,” and they’ve lived out this philosophy three times in their family of eight. After retiring from the military, Sean took up a second career as a police officer. Talya is a homeschooling mom getting ready to begin her 13th year of teaching their children at home, but she was an adoption social worker before the birth of their first child, and says it was that particular job that led to her interest in adoption for her own family. When she discussed the idea with her husband she says he was “on board,” telling Live Action News, “He has always seen adoption as a way to fulfill the Bible’s command to care for orphans. We always thought we would pursue adoption once we were done having children biologically.”

A Facebook video posted recently by Covenant Care Adoptions features the Hookers’ most recent adoption moment — a moment that is beautiful and powerful, as their infant son, Elijah, joins his new family and becomes one of six siblings:

The time to adopt came after the birth of their third child, when Talya experienced problems that left her unable to bear more children. Talya told Live Action News, “We took that as the Lord opening the door to pursue adoption. He grew within in us a desire to open our hearts and home to children who need godly homes — as many as He planned for our family.”

But the process was long, Talya explains:

Our three biological children were born in 2001, 2004, and 2008. After completing a home study in 2011 and not being successfully placed with a child, we began the process again in 2013 when we moved to another state. Our second son’s domestic infant adoption was our first adoption. He was 3 1/2 weeks old when he was placed with us and four months old when his adoption was finalized in 2014. Our middle daughter’s adoption through a state agency was finalized when she was 13 in 2015.

The adoption experience featured in the video above is the Hooker family’s third. For little Elijah, Talya says the adoption process took over a year:

We began the home study process with our local agency in March 2017. The home study was complete and approved by August 2017. We then had to complete the application process with our Georgia placement agency. We were finally placed on their waiting families list in October. We were told of our match with our new son on June 1, 2018. He was just shy of two weeks old at the time.

“When you are in the waiting stage,” Talya explained, “it can feel like an excruciatingly long time.” She told Live Action News that she and Sean feared their ages (44 and 45) might be “a hindrance to being chosen by a birth mother, especially if we are the age of the birth mother’s own parents.” But “in the end,” she said, “we knew we had to trust the Lord. If He wanted us to welcome another baby into our home, He would orchestrate it, despite our doubts and fears.”

And He did that very thing. 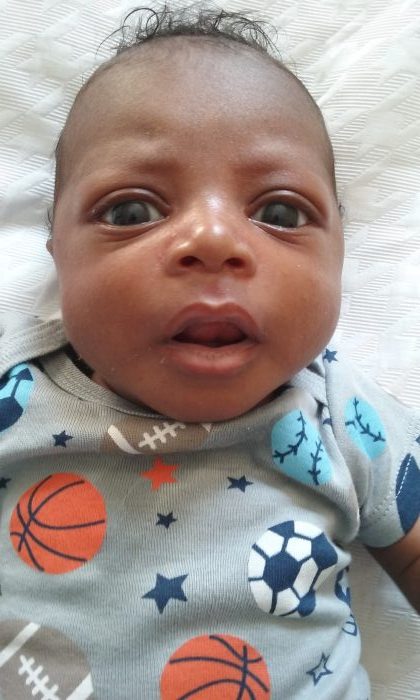 Talya explained to Live Action News that families seeking to adopt children must each create a profile book about their family, so birth mothers can look through them and choose the family she feels would be best for her child. “We had been on the waiting families list of Covenant Care Services since October 2017,” Talya said. “Our profile book was loaded with lots of pictures and information about our family — who we are, what we like to do, our favorite things. When you put together your profile, all you can do is be honest because you never know what will draw a birth mother to your family.”

But, Talya says, she and Sean had no idea when their profile book was being shown. “It’s amazing how the Lord works behind the scenes,” she said, adding that the birth mother’s selection of their family was “a humbling experience. It’s amazing to think that someone would trust you with the most precious gift they could give — their very own child. That is a sacrificial love.”

Talya and Sean love to encourage others to adopt. She told Live Action News they have “a heart for encouraging Black couples like us to adopt children, as there is such a great need among placement agencies across the country.” Tragically, “Many agencies have no or very few Black waiting families to offer their birth mothers.”

The Hooker family’s hope is that families who see and read their story will “realize that adoption may be a more realistic pursuit than they once thought it to be.” For this beautiful family, adoption has clearly been a tremendous blessing — three times over.