In 2017, abortion outnumbered each of the individual top ten leading causes of death for the United States. The alarming numbers were compiled from data published by the Centers for Disease Control (CDC) as well as the latest abortion data published by the Guttmacher Institute, a former “special affiliate” and research arm of Planned Parenthood. The numbers reveal that heart disease, cancer, respiratory disease and diabetes (among others) — all tragic causes of death — do not individually outnumber reported deaths of preborn infants killed by a violent abortion in 2017*. In addition, had aborted preborn children (862,320) been counted as persons, they would have accounted for over 23 percent (23.4%) of resident deaths in 2017.

The data comes from information collected by the National Center of Health Statistics (NCHS) which is compiled from death certificates filed in all 50 states and the District of Columbia. It is then compiled into the National Vital Statistics System and published annually by the CDC. That 2017 report, which “presents final 2017 U.S. mortality data on deaths and death rates by demographic and medical characteristics,” found the following: 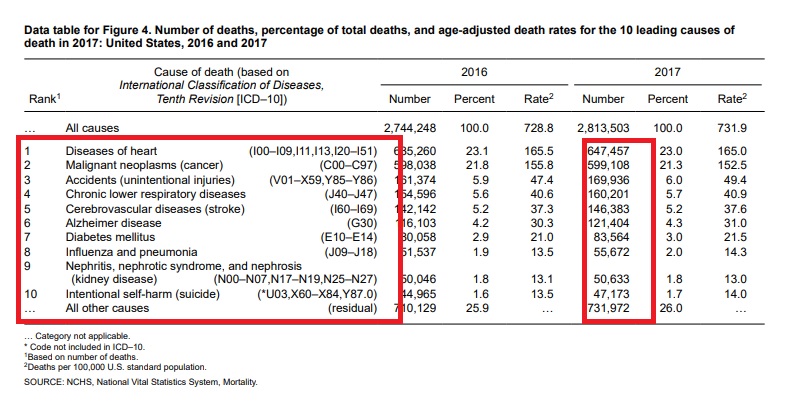 If the life of each preborn child reported to have been killed from a legal abortion had been counted, not only would it increase the total of deaths to 3,675,823, but abortions (862,320) would have accounted for over 23 percent (23.4%) of resident deaths in 2017.

The top two leading causes of death in both 2016 and 2017 were heart disease and cancer.

U.S. abortions outnumbered the remaining eight (out of the ten) leading causes of death combined (2017): 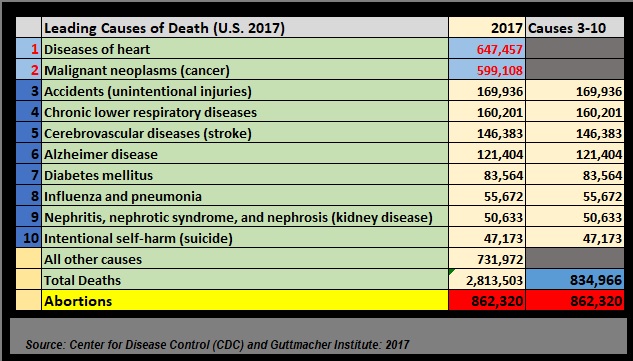 Other causes of death:

Abortions also outnumbered the following deaths in 2017, not listed in the top ten causes: 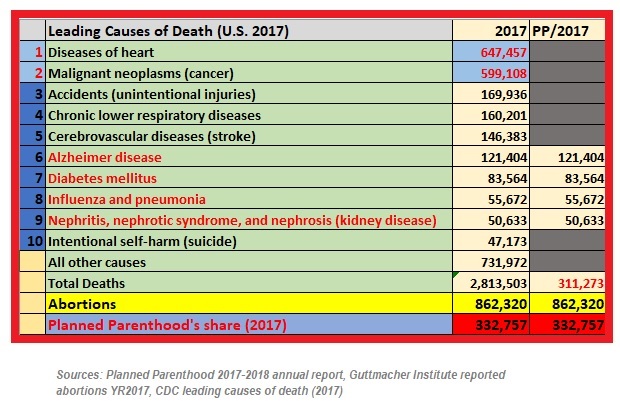 Live Action News previously documented that by 2018, abortions at Planned Parenthood reached the highest ever reported (345,672 abortions) in a single year. Today, Planned Parenthood receives nearly $1.7 million dollars a day from U.S. taxpayers, while PP ends the lives of 947 preborn babies every day, at a rate of 39 per hour, or one abortion every 91 seconds.

Read more on that report here, note that 2017 CDC abortion data has not been published yet.

Every human death is a tragedy and each one should be mourned. While individuals within the pro-life movement work to help many who suffer from these leading causes of death, Live Action as an organization remains focused on eliminating the violence of abortion by working to change hearts and minds so that dignity and value can be returned to every single preborn child in the womb.

*For clarification: The above comparisons do not suggest that abortion outnumbers all top ten leading causes of death combined.