Facebook’s latest attempt to silence Live Action’s pro-life message seems to be fueled by a completely erroneous notion of what exactly is and isn’t an abortion. Historically, “abortion” has meant the ending of a pregnancy, with the term “spontaneous abortion” used to signify a miscarriage. However, today’s usage of the word “abortion” is commonly understood to mean the deliberate, intentional, and often elective ending of a human life during pregnancy. With that in mind, it becomes quite clear what an abortion is and what it isn’t — and reinforces the idea that it is, in fact, never medically necessary.

Facebook “fact-checkers” — in this case, two abortionists listed on the original fact check (which has since been altered) — say that Live Action and Lila Rose are misleading people by stating that abortion is never medically necessary. These abortionists claim that there are cases in which the preborn child must be intentionally and deliberately killed in order to save the mother’s life. But thousands of doctors have attested that this is false. In fact, 2,500 pro-life doctors belonging to the American Association of Pro-Life Obstetricians and Gynecologists (AAPLOG) agree that it is never medically necessary, and over 1,000 other physicians signed the Dublin Declaration attesting to the same.

Let’s examine whether these commonly listed cases below are (or aren’t) abortions:

Abortion advocates sometimes fall back on ectopic pregnancy as an example of when abortion is medically necessary; other people simply tend to question whether it actually qualifies as one. It is not an abortion. 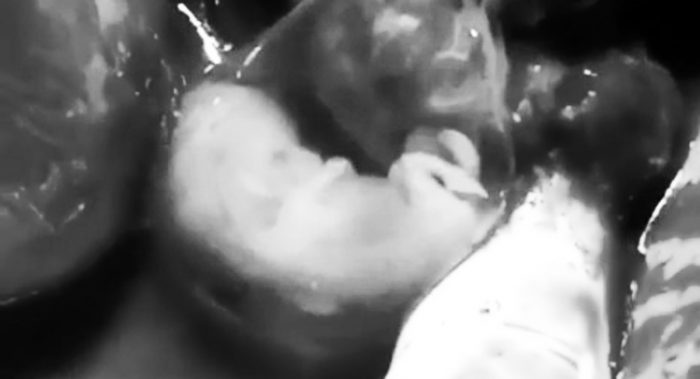 A preborn child removed during an ectopic pregnancy.

To resolve an ectopic pregnancy, the preborn child must be removed, but not with an act meant to kill the child (abortion), but rather by an incision in the fallopian tube or potentially the complete removal of the tube. The child will die of natural causes and the mother’s life will be saved.

Outlawing abortion will not end the practice of removing a child in an ectopic pregnancy.

D&C or Induction Medication after Miscarriage

When a mother has experienced an early miscarriage, sometimes the miscarriage doesn’t complete right away. In these cases, doctors will sometimes do a D&C or give the mother medication to expel the deceased child from the uterus. Since the child has already died, there is no intent to kill involved. Removing a deceased preborn child by D&C is not an abortion. The practice of removing a deceased preborn child would not be outlawed if abortion were outlawed.

If an abortion pill is given to the mother while her child is still alive in the womb, the intent is to end the life of the growing child. The abortion pill (the effects of which can potentially be reversed through use of progesterone supplementation) starves the child to death, as explained in the video below by former abortionist Dr. Anthony Levatino.

Likewise, a D&C abortion used while the child is still alive has the intent of killing that child. As explained in the video below by Dr. Levatino, a D&C or suction abortion kills the child by suctioning him or her out of the uterus, completely destroying the child’s fragile body with the force of the powerful vacuum machine.

A D&C on a living preborn child is an abortion because there is intent to kill.

Preterm Delivery to Save the Mother

The abortionists behind the Facebook “fact-check” of Live Action claim that early delivery is a fine approach to save the life of the mother when the child is of an advanced gestational age, but when “a fetus has not developed sufficiently, it would not be possible for expedited delivery to save its life.” In this case, the abortionists claim that abortion is necessary.

An example the abortionist “fact-checkers” used to attempt to claim abortion would be medically necessary is in the case of placenta previa. But in truth, using abortion in these cases could kill the mother by causing her to bleed to death.

AAPLOG’s Chairman of the Board, Dr. Christina Francis, explained:

Placenta previa is a condition in which the placenta covers the cervix, making a vaginal delivery impossible due to the possibility of life-threatening hemorrhage if labor occurs. These are frequently diagnosed in pregnancy on ultrasound around 20 weeks, however approximately 90% of these will resolve on their own before delivery. If significant hemorrhage occurs due to placenta previa (which again is so rare prior to viability that no incidence is even reported), the patient should be taken for an emergency C-section which is the most expedient way to get her bleeding under control.

Contrary to early delivery to save the life of the mother, an induction abortion is committed in order to ensure the death of the child through the use of a medication called Digoxin that will stop the baby’s heart. Once the child dies in the womb, he or she is delivered stillborn days later. This late-term abortion procedure is explained by Dr. Levatino in the video below.

Inducing labor with the intent of producing a stillborn child is an abortion.

Likewise, “partial-birth” (D&X) abortion, in which a living preborn child is delivered in the breech position and then killed by puncturing the base of the skull and suctioning out the child’s brain before he or she is fully delivered, is an abortion and is illegal in the United States.

“With thousands of OB-GYNs and medical professionals on the record agreeing with us that the direct killing of a child is never medically necessary, it is telling that Facebook decided to fact-check our information, which we have posted about for over three years, using two abortionists for their sourcing,” said Live Action president Lila Rose in a press release. “Not only did they fail to get disinterested perspectives, they appear to have gone out of their way to find pro-abortion activists whose public opposition to our views is indisputable. This is clear evidence of bias and discrimination against our over three million strong Facebook community members and an outrageous act of censorship on the part of Facebook.”

It should be common sense that an abortion carries with it the intent to kill, and Facebook should realize that using abortionists to “fact-check” pro-lifers is a complete conflict of interest.