A newly updated abortion training curriculum suggests that trainees tell women that a baby aborted at nine weeks may “look like a cotton ball.” The curriculum also refers to the violently aborted baby as “the pregnancy tissue,” and falsely claims that the preborn child does not feel pain until the third trimester.

The 2022 training document called “Training in Early Abortion for Comprehensive Healthcare (TEACH),” was published just as the Supreme Court overturned, or in the words of the document, “gutted” Roe v. Wade in June. Like previous curriculums, TEACH was funded by the abortion pill manufacturers as well as the Anna Lalor Foundation. The curriculum openly claims, “TEACH receives unrestricted educational grant funding from Danco and GenBioPro LLCs.” According to the TEACH annual report, in 2020-2021 TEACH also received funding from, “The Lisa and Douglas Goldman Fund, The Peggy and Jack Baskin Foundation, The Rapidian Foundation and Women’s Foundation of California.” 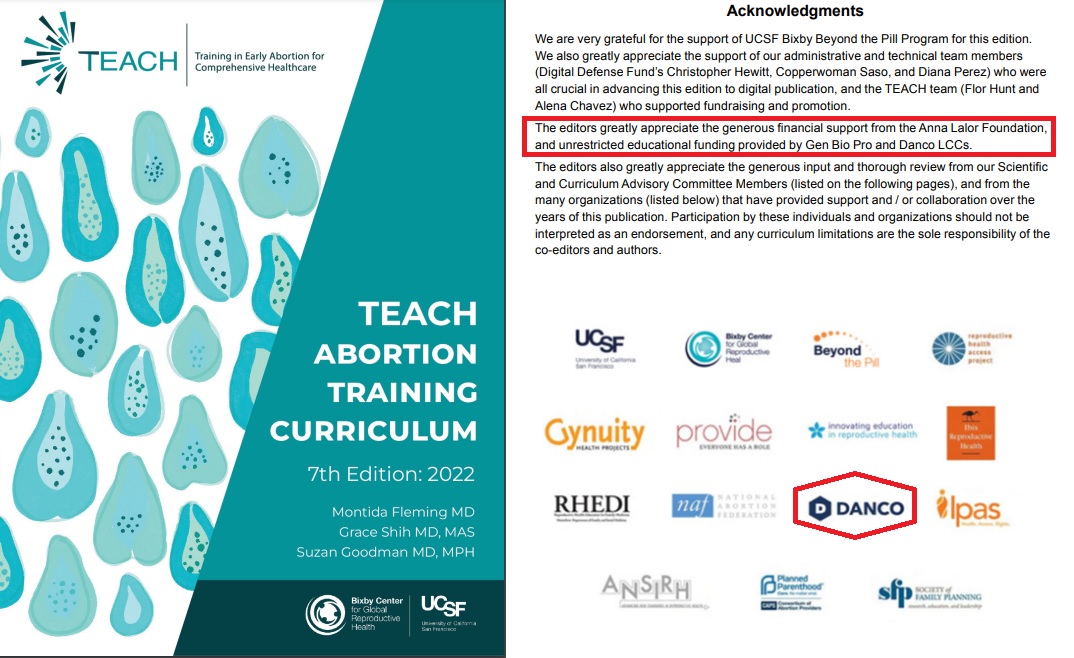 While abortion supporters often claim that preborn children are mere ‘clumps of cells,’ images obtained by Live Action News from what appears to be the National Abortion Federation (NAF), reveal that they’ve always known the truth: preborn children, even in the first trimester, are recognizable as human beings. Live Action News previously documented that abortion providers are now offering women the option to see the remains of their aborted children.

Though even Planned Parenthood’s website (separate from their abortion marketing pages) describes a baby at nine weeks as having fingers and toes. Yet, if a woman asks, “Can I see it?” after their abortion, TEACH tells future abortionists, “Many providers start by normalizing this desire, and showing the patient the pregnancy tissue. Many providers show it to the patient after clearing blood and decidual tissue, in a small open container. If asked what they can expect to see, consider describing what the tissue looks like at that stage, so they can make an informed choice about seeing it.” 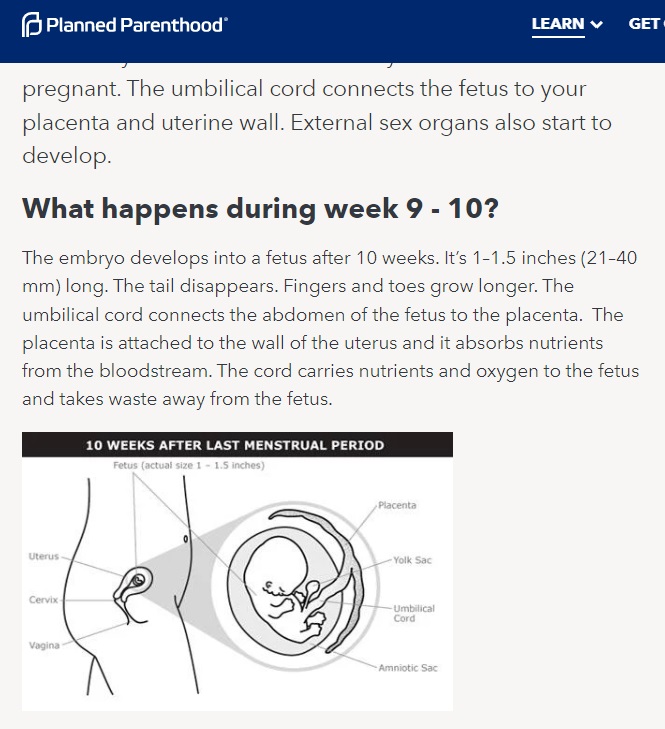 The TEACH abortion training curriculum also suggests that trainees tell women, “Before 9 weeks it is difficult to visualize fetal parts.”  And they tell trainees to say, “The pregnancy may look like a blood clot or a cotton ball.’” [emphasis added]

Images and descriptions from the previously mentioned NAF document acknowledge though that there is “recognizable” fetal tissue at eight and nine weeks gestation where, “Fragmented or intact fetal parts, including elbows and knees,” can be detected. The slide (image below) appears to show extremities, such as part of an arm and hand.

“For later gestations, consider asking tactfully what the patient expects to see. Alert the patient that the fetus may not be intact and that some recognizable parts will be visible, and confirm they still want to see,” TEACH also states.

But what the baby looks like isn’t the only thing that TEACH instructs abortion trainees to mislead women about.

Does the baby feel pain?

If an abortion patient asks, “Will this hurt the baby?” TEACH tells abortion trainees they could tell women, “No, this will not hurt the baby. At this point in the pregnancy, the fetal nervous system is not developed enough to feel pain.”

The curriculum also falsely claims, “Evidence regarding the capacity for fetal pain indicates that fetal perception of pain is unlikely before the third trimester.”

Yet, there is wide evidence that preborn children can feel pain in the first trimester as early as eight weeks, and it is well known that premature babies who are less than 25 weeks gestation can feel pain, which is why doctors use anesthesia when performing surgery on premature babies both before and after birth.

Abortion advocates deceive women and the public by suggesting that a fetal heartbeat cannot be detected in a child as young as six weeks gestation, but abortionists know it can be. In previous years, TEACH has claimed that an “absence of embryo with heartbeat” is a sign of early pregnancy loss.

The 2022 TEACH abortion training curriculum went so far as to remove the term “heartbeat” and now states, “Cardiac activity appears around 6 ½ weeks.” [emphasis added]. Ironically, the curriculum does note that the “absence of embryo with cardiac activity” is a sign of pregnancy loss. 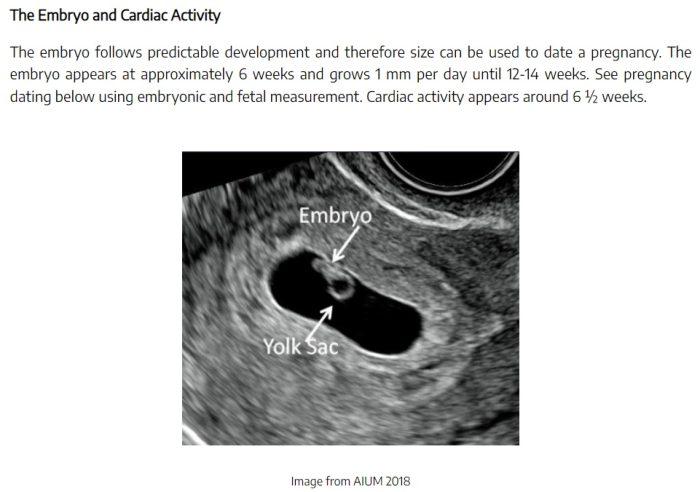 If a woman wants to know whether an abortion will affect her ability to have children in the future, TEACH trains abortion providers to tell women, “There is no increased risk of infertility” and that “multiple abortions pose little or no increased risk compared to a single procedure.” They advise abortionists to tell women, “There is a lot of misinformation out there about this issue, so I want to reassure you and be very clear – abortion is extremely safe and will not affect your ability to get pregnant in the future if and when you want to.”

In addition, both the first trimester and second trimester abortion consent forms from Gynemed in Maryland state clearly that, in a surgical abortion,  “Sometimes the instruments may go through the uterus which may include damage to internal organs (bladder and bowel). Hospitalization may be required and surgery may be necessary. Rarely, it may be required to remove the uterus which will result in infertility.” The forms ask women to confirm, “I understand that no guarantees about my future fertility can be offered to me, and no such guarantees have been made to me. I understand that there is evidence that women who have more than three induced abortions may be at increased risk for premature labor.”

The curriculum directs abortion trainees, which include Primary Care physicians, to think through a series of concerns regarding providing, referring, or seeing an abortion. The curriculum asks trainees questions such as, “When (if ever) you first saw a gestational sac or fetal parts, how did you feel about it? Were there any factors that influenced how you felt?” and “Are there ways to respect the moral autonomy of the patient, without undermining your own?”

READ: Former abortionist confesses own abortion: I believed the lie that women needed abortion to succeed

It also asks trainees, “How would you feel about referring or providing an abortion for a patient who: Is ambivalent about having an abortion but whose partner wants them to terminate the pregnancy … [or] Wishes to obtain an abortion because they are carrying a female fetus … [or] Has had a number of previous abortions … [or] Conceived using assisted reproductive technology, but changed their mind.”

The misinformation within the TEACH curriculum is to be expected. It was co-edited by Suzan Goodman MD, a Clinical Professor at the University of California San Francisco (UCSF), and the TEACH co-founder and curriculum director. Her online bio reveals that she “served on the Planned Parenthood National Medical Committee (2010-2016) and as a Planned Parenthood Director of Medical Education (2003 – 2007).” She has also provided technical assistance and consulting for Ipas, an international organization dedicated to increasing abortion access, Planned Parenthood Federation of America, and the Center for International Reproductive Health Training among others.

Montida Fleming MD, Assistant Clinical Professor at UCSF who is also a clinician with the virtual abortion pill website Hey Jane and a Physicians for Reproductive Health (PRH) fellow also co-edited the curriculum along with Grace Shih MD, an Associate Professor at the University of Washington who commits abortions.

TEACH is a University of California, San Francisco (UCSF) program, which receives millions in government dollars to train abortionists. According to its website, TEACH was “Founded collaboratively in 2003 by UCSF’s ANSIRH (Advancing New Standards in Reproductive Health) Program and two Planned Parenthood affiliates.” The website also states that “UCSF’s Bixby Center for Global Reproductive Health, ANSIRH, and the Department of Family and Community Medicine provided the setting for TEACH to expand its impact…”