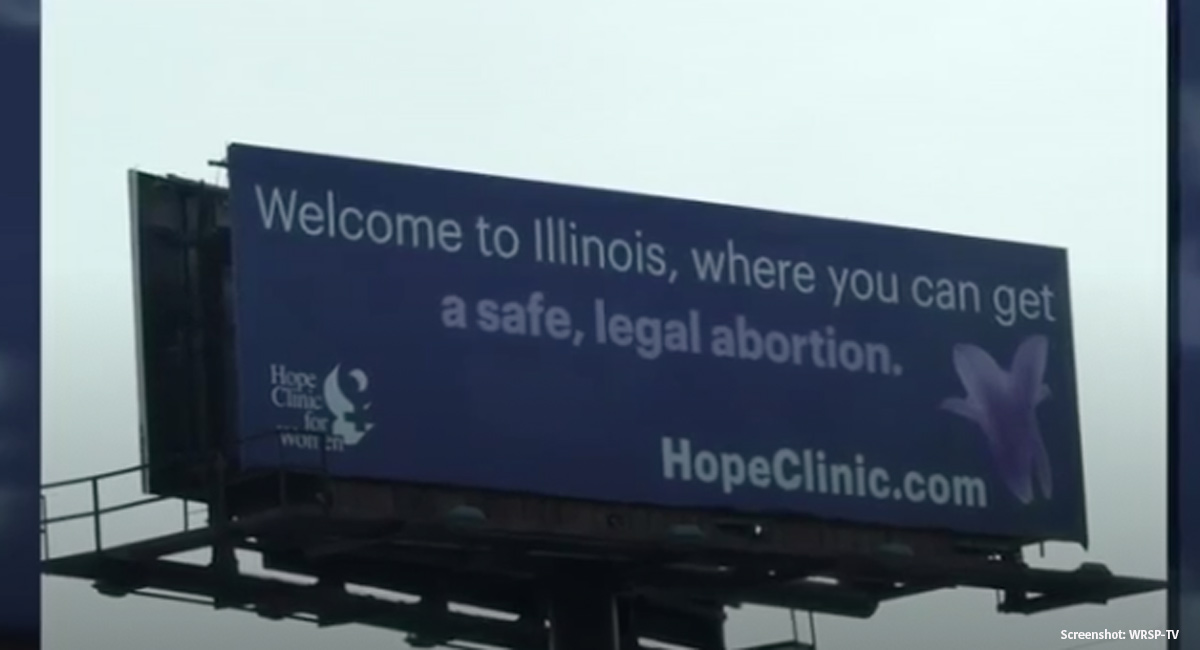 The Hope Clinic for Women, an abortion business, has a new billboard on the Missouri-Illinois border advertising its “services.” The billboard reads, “Welcome to Illinois, where you can get a safe, legal abortion.” Illinois has few restrictions on elective abortion, and, if pending legislation passes, it will have virtually none.

While the abortion industry continues to market abortion as “safe,” there are many horrific instances of negligence, harm, and even death committed by abortion businesses in Illinois in recent years. Many abortion businesses in the state are currently not licensed. If the sweeping pro-abortion bills currently making their way through the legislature do pass, the abortion industry in Illinois will have even less accountability. Women in Illinois, Missouri, and other nearby states, may pay the price, along with their children.

According to CNY Central, the billboards can be seen from both I-55 and I-64 when entering Illinois from Missouri. The billboard was inspired by similar advertising on the Utah-Colorado border, where Utah has stronger pro-life protections in state law.

Alison Drieth, media relations coordinator for Hope Clinic, explained to CNY Central, “We’re in a similar situation here when it came to access to reproductive health care including abortion and thought it might be as equally successful on the Illinois Missouri border.” And they have already been quite “successful” at marketing to out-of-state women, as Hope Clinic acknowledges that half of women seeking elective abortions at the Granite City facility are from Missouri.

The eye-catching billboard is not the first time this abortion business has caught media attention. Hope Clinic made the news last year when a man peacefully protesting outside the facility was held at gun point. Hope Clinic also received media attention following a lawsuit by a patient who alleged that the abortionist at Hope Clinic committed an abortion on her despite the fact that she was not pregnant. Inexplicably, the radical pro-abortion legislation currently being considered by the Illinois Legislature would remove all penalties for abortionists committing abortions on women who are not pregnant.

“Safe” abortion in Illinois? Not so much.

A look at other parts of the state reveals that the abortion industry, and abortion, aren’t even close to “safe” there as the billboard claims. Recently, staff at an unlicensed abortion facility in Peoria refused to give 911 any details about a patient’s condition because, “We’re an abortion clinic, and it will be posted all over the internet.” While a patient was experiencing emergency complications at the abortion facility, the staff member repeatedly refused to provide details to the 911 dispatcher.

Further evidence of the lack of oversight and regulation of the abortion industry in Illinois can be seen in the case of abortionist George Backardjiev, who was disciplined by the Texas Medical Board and took up practice in Illinois. After causing the death of a baby in Texas, Backardjiev was no longer allowed to practice medicine in the state. However, after failing to report to the Illinois Medical Board that he was under discipline in another state, Backardijiev practiced as an abortionist in Illinois, ending the lives of preborn babies every day.

Even more shocking, in 2012, Tonya Reaves, a 24-year-old mother, died following severe injuries sustained in an abortion at a Chicago Planned Parenthood. As Cassy Fiano-Chesser wrote for Live Action News at the time:

Where are the abortion pushers who claim that they’re pro-choice in order to keep abortion safe? If women’s safety is what they truly are concerned with, then they should be demanding an investigation into Planned Parenthood, as well as charges of criminal negligence and malpractice. No woman should have to suffer as Tonya Reaves did, and Planned Parenthood should be held accountable.

Illinois is already an abortion destination, and it could get worse

While abortion activists often claim that women will seek elective abortion whether or not it is legal, there is clear evidence that women are less likely to seek abortion when it is restricted or illegal. Secular Pro-Life noted in response to Hope Clinic’s billboard that the abortion rate in Illinois is 87% higher than that of Missouri.

The extreme pro-abortion legislation currently being considered would make the state an abortion destination. As many states advance legal protection for preborn babies, it’s clear that Illinois already is an abortion destination and the abortion industry is working to make it even more so. This goes against the values of the thousands of Illinois voters who rallied against the bills at the capitol and filed their objections. As one Illinois resident told WRSP-TV, “I would hope that Illinois has more to recommend than our abortions…. I hope we would have more to offer to people than that.”