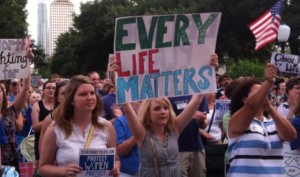 Jeannie Deangelis’ January 12 Live Action post inspired some of our fiercest comment battles in recent memory, including the attention of one Bob Seidensticker, a published author, speaker, and the blogger behind Cross Examined on the Patheos Atheist Channel. So enchanting was our distinguished guest’s commentary that it inspired me to check out his most recent musings on abortion, and what I found did not disappoint.

“Why is it Always Men Advancing the Pro-Life Position?” he asks:

Look at the pro-life lineup of speakers and authors, and you’ll see far more men than women. Doesn’t it seem unfair that the gender that isn’t personally inconvenienced by pregnancy is the one pushing the restrictions?

It truly is remarkable to see how much pro-choice thought consists of pure fabrication. Their doctrine has always placed great importance in the lie that the pro-life movement is a male-dominated tool of the patriarchy, but rarely do they put it in such a blunt, easily-disprovable form.

It’s certainly not true here—Live Action’s President is, of course, the one and only Lila Rose, and our lineup of bloggers certainly doesn’t fit Seidensticker’s narrative—just between January 1st and this writing, we’ve ran pieces by thirteen different women, and only four men.

And we’re hardly the exception; in fact, it’s hard to look at the other major pro-life organizations and not conclude that women rule this movement. American Life League’s President is Judie Brown. The National Right to Life Committee is led by President Carol Tobias, and over half of its leadership is female. Americans United for Life is led by President and CEO Charmaine Yoest, and the majority of its Legal & Policy Team are women. Students for Life’s President is Kristan Hawkins, its VP is Tina Whittington, and most of its staff is female. Two-thirds of the Reproductive Research Audit team is female. Half of Pro-Life Action League’s staff is female. So is half of the American Association of Pro-Life Obstetricians & Gynecologists’ board.

Oh, and let’s not forget the organizations specifically of, by, and for pro-life women: Susan B. Anthony List, Feminists for Life, Silent No More Awareness, Concerned Women for America, and the Clare Boothe Luce Policy Institute.

But what about the general public? Glad you asked. If you actually look at the many polls asking this question, it turns out that both sides win some and lose some, but there is no pattern of women consistently siding with legal abortion; in fact, on several questions the majority of women are pro-life by a wider margin than men.

The only area where men clearly outnumber women is elected office. Sabrina Schaeffer of the Independent Women’s Forum suggests this may be due to females’ higher aversion to the cesspool of 21st-century campaigning, leaving the field clear for Old Guard, establishment types who tend to be male. And the GOP establishment tends not to be all that wild about those of us who demand more than lip service from them. (By contrast, women heavily influence the Tea Party, as acknowledged by Politico.

Whatever the reason, it sure isn’t because pro-lifers aren’t doing their part to send women to Washington or their state capitals. After all, had the pro-life vote been the majority in 2008, we’d likely have the country’s first female Vice President and presumptive 2016 presidential nominee right now.

Lastly, consider abortionism’s sainted gatekeepers of the “right to choose,” the Supreme Court. If you recall the SCOTUS vacancies of the Bush years, many pro-lifers were deeply disappointed in John Roberts’ nomination (and now get to say “told ya so”), in large part because we had high hopes the next justices would be Judges Janice Rogers Brown and Priscilla Owen. So if those sexist right-wingers had gotten their way, the Supreme Court would actually be the closest it’s ever been to a female majority!

Of course, none of this is a shock to those of us who recall that the founding heroines of true feminism opposed abortion.

If Bob Seidensticker is sincere in claiming he simply wants “to see participants in the conversation in proportion to how it impacts their lives directly,” then this post should more than satisfy him. If not, the burden is on him to explain why he adamantly pretends legions of pro-life women simply don’t exist.

1/25/14 Update: Secular Pro-Life Perspectives also has a terrific post on the subject which digs into the Gallup data in more detail. Check it out!