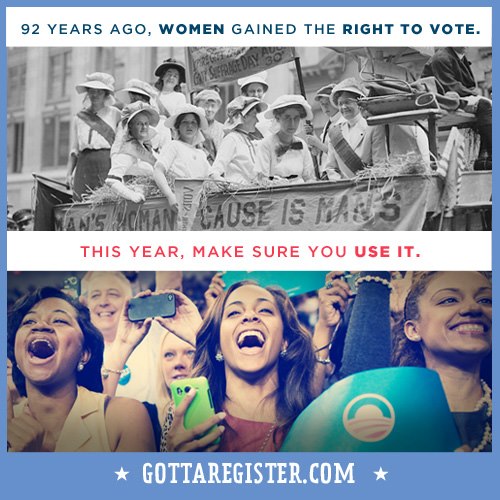 A lack of historical context can be a dangerous thing. Yesterday, the Obama campaign posted the following image on its official Tumblr: 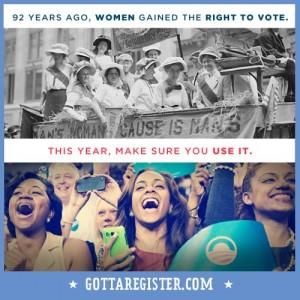 Taken in isolation, it’s a slick, efficient bit of emotional blackmail suggesting that women who don’t vote for the abortion agenda that leftist elites have declared to embody the Concerns of Real Women are somehow failing the legacy of those who secured their right to vote. And nobody wants to let them down, right?

Nobody, that is, except liberals themselves. The inconvenient truth is that the women in the top picture would most likely have opposed those in the bottom picture on the very questions Team Obama has made the centerpiece of their women’s outreach efforts. The original leaders of the feminist movement – y’know, the ones who actually fought to improve women’s lives, rather than perpetually taking credit for the achievements of past generations – wrote a great deal about the evils of abortion. Here are some of the highlights:

Susan B. Anthony:  Guilty? Yes. No matter what the motive, love of ease, or a desire to save from suffering the unborn innocent, the woman is awfully guilty who commits the deed. It will burden her conscience in life, it will burden her soul in death; But oh, thrice guilty is he who drove her to the desperation which impelled her to the crime!

Emma Goldman: The custom of procuring abortions has reached such appalling proportions in America as to be beyond belief. … So great is the misery of the working classes that seventeen abortions are committed in every one hundred pregnancies.

Mattie Brinkerhoff: When a man steals to satisfy hunger, we may safely conclude that there is something wrong in society – so when a woman destroys the life of her unborn child, it is an evidence that either by education or circumstances she has been greatly wronged.

Victoria Woodhull: The rights of children as individuals begin while yet they remain the foetus.

Sarah Norton: Child murderers practice their profession without let or hindrance, and open infant butcheries unquestioned. … Is there no remedy for all this ante-natal child murder? … Perhaps there will come a time when … an unmarried mother will not be despised because of her motherhood … and when the right of the unborn to be born will not be denied or interfered with.

Mary Wollstonecraft: Women becoming, consequently, weaker … than they ought to be … have not sufficient strength to discharge the first duty of a mother; and sacrificing to lasciviousness the parental affection … either destroy the embryo in the womb, or cast if off when born. Nature in every thing demands respect, and those who violate her laws seldom violate them with impunity.

Alice Paul: Abortion is the ultimate exploitation of women.

These women recognized simple truths that today’s usurpers of their legacy deny: true rights are not exercised by crushing the rights of the innocent, unborn children are not foreign parasites to be exterminated, and tying the sanctity of womanhood to abortion could only result in the degradation of feminism.

Now, a century later, what passes for feminism stands for the devaluation of life right up to birth, narcissistic control over others, shameless dishonesty, disdain for the rights of parents, the cheapening of sex and stigmatization of abstinence, demagoguery of the worst order, blind rage and crudeness, and even the suffering of girls both in and out of the womb. This is supposed to result in more opportunity, security, and dignity for women and less sexism in our society? This is what America’s parents want for their daughters?

The real feminists didn’t think so. Pro-aborts hijack their names, victories, and images as yet another way to stigmatize dissent from their agenda as somehow anti-women. Pro-lifers should devote particular time and energy toward spreading the truth, which will go a long way toward breaking their stranglehold on independent thought in this country.