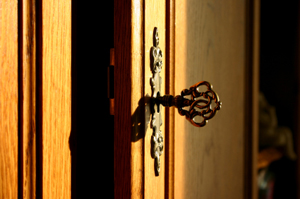 Typically, “coming out of the closet” has to do with one’s sexual orientation. But “coming out” also means ’fessing up to something you’ve kept secret in order to avoid embarrassment.

When it comes to the subject of abortion, having a vehemently radical pro-choice advocate in the White House has emboldened militant abortion and even latent infanticide supporters to slowly inch their way of the closet.

A prime example of someone who’s no longer embarrassed is Melissa Harris-Perry. Melissa is the tampon-earring-wearing, Mitt Romney black-grandson-mocking talking head from MSNBC.

No longer ashamed of embracing the unthinkable, Melissa joined the ranks of bioethicists when she said she believes that life begins when parents “feel” life begins. Harris-Perry came out of the antiquated first-trimester closet when she answered her own question: “When does life begin?” Melissa’s answer: “[it] depends an awful lot on the feeling of the parents.”

The implication of such a dramatic statement is that abortion is acceptable as long as the parents of an unborn child have the “feeling” that their baby is not a fully living human being. That sort of twisted philosophy seems to imply that freedom of choice can be exercised at any time, at any age.

Planned Parenthood lobbyist Alisa LaPolt Snow testified against a Florida bill that would require that babies born alive in botched abortions be given medical care. When asked the question, “If a baby is born on a table as a result of a botched abortion, what would Planned Parenthood want to have happen to that child that is struggling for life?” Ms. LaPolt Snow stuck her head out of the infanticide closet and said, “We believe that any decision that’s made should be left up to the woman, her family, and the physician.”

Recently, yet another representative came out at odds with those who oppose baby-killing. This time it was Planned Parenthood board member Valerie Tarico, Ph.D.

Besides Dr. Tarico being an angry ex-evangelical schooled at Wheaton College, home to The Billy Graham Center for Evangelicalism, she’s also one of 400 members of the Planned Parenthood of the Great Northwest’s Board of Advocates, all of whom are united by their “personal integrity and commitment to the Planned Parenthood mission.”

How anyone can associate “personal integrity” with the deliberate destruction of innocent human life is in itself perplexing. Clearly, what is going on is an appeal to Americans who are abortion-friendly but conscience-conflicted. Tarico’s goal is to lay out a convincing argument that “it is morally or spiritually imperative that a woman can stop a pregnancy that is underway.”

To prove it, it appears the “born again” abortion promoter’s life goal is to convince the flock and anyone else who will fall for her twisted theological viewpoint that abortion is both ethically and spiritually acceptable.

In an article entitled “Abortion as a Blessing, Grace, or Gift – Changing the Conversation about Moral Values,” Valerie presents a recipe for abortion advocates to use so that the First Church of Feticide can “reclaim the moral high ground in the [abortion] debate.”

She defines “being able to stop an ill-conceived gestation” as a “sacred gift.” The author also portrays those who do the actual baby-butchering as doing the work of God. Ironically, the God she tries to imply they’re doing the work for is the main character in a Bible Valerie spends an inordinate amount of time mocking.

In other words, Tarico has come out of the closet as an abortion advocate on behalf of those who aren’t as flippant about the unthinkable as Melissa Harris-Perry and Alisa LaPolt Snow.

In Tarico’s past philosophical rantings, she mentions the value of “chosen children.” Citing “a personal example,” in her blog Tarico tells the story of why, over fear of possible toxoplasmosis-induced blindness and brain lesions, she aborted her unborn child after the first trimester.

Her reasoning concerns the higher moral ground and the sacredness of the larger village. Tarico said she feared that by having sightless offspring, she’d be negatively impacting that child and any future children, should she decide to let any of them live. In addition, she’d be “risking [the] ability to give to the community [and] possibly creating a situation in which our family needed to suck more out of society than we could put back into it.”

The only thing missing from Valerie Tarico’s abortion-as-religion argument is the moral and spiritual validation of Melissa Harris-Perry’s belief and Planned Parenthood’s practice of slaying newborn babies.

It’s undeniable that embarrassments over points of view and actions that used to be shameful and kept to oneself are gone. Instead, there are those emerging unabashed from the darkest closets who push pseudo-religiosity in hopes of spiritualizing selfishness and endorsing murder.