Desiree Robinson was 16 when she ran away from her Chicago home. She met a man who began selling her for sex on Backpage.com. On Christmas Eve in 2016, after a paid encounter, Desiree was beaten to death. Her mother, Yvonne Ambrose, filed a suit against Backpage.com.

On April 6th, Backpage.com, a site that reached 97 countries and raked in an estimated $500 million from prostitution, was seized by the U.S. federal government.

Maggy Krell, a former assistant attorney general in California who worked on the case, told the Washington Post:

“There is no one in the entire world who made more money off sex trafficking than the owners of this website. Seeing it shut down and having their business model become clearly illegal is really gratifying. If one case can change the world, it’s this case.” 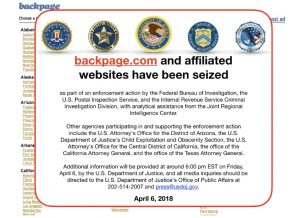 Sadly, not everyone shares her sentiments. The official Women’s March Twitter account called the shutting down of Backpage “an absolute crisis for sex workers who rely on the site to safely get in touch with clients.”

. The shutting down of #Backpage is an absolute crisis for sex workers who rely on the site to safely get in touch with clients. Sex workers rights are women’s rights. Follow @SafeSpacesDC @melissagira @swopusa @KateDAdamo @supporthosechi @anaorsomething for more info. https://t.co/S3Orx3aM8Z

Sex work is consensual. Sex trafficking is coerced. The crackdown on Backpage is not about ending trafficking; it’s motivated by the patriarchal notion that women should not be free to do what we want with our bodies. #DecrimNow #LetUsSurvive pic.twitter.com/o1RfM7Piey

The Women’s March tweeted a statement from Collective Action for Safe Spaces, who said the crackdown on Backpage is motivated by patriarchal notions. One would think the patriarchal figures worth condemning are Backpage owners facing money laundering and facilitating prostitution charges for editing ads to hide child sex trafficking. Shouldn’t those oppressors get the brunt of the Women’s March’s anger?

Tragically, the Women’s March and its partnering groups, Planned Parenthood and NARAL Pro-Choice America, fight for bodily autonomy at any cost. We’ve seen this when Live Action exposed Planned Parenthood for covering up sex trafficking, and pro-abortion groups were largely silent.

We see it in Ireland now as a speaker said to a crowd cheering, “Hoes need abortion”: “The similarities between the sex worker rights movements and the abortion rights movement are endless. Everything I want to say about abortion I could swap and say sex work, and they are intrinsically linked, these movements.”

The Womens’ March leaders should be grateful that those who suffered from Backpage’s trafficking are getting justice. The film, I AM JANE DOE tells the stories of American mothers who fought Backpage over its use in selling their minor daughters. The Los Angeles Times said I AM JANE DOE was a “powerful call to action.”

On April 11th, President Trump took action and signed into law FOSTA, a bill enabling state and federal authorities to pursue websites that host sex trafficking ads. As Trump signed that bill, Desiree Robinson’s mother Yvonne was by his side. She shared, “It means so much to our family. Hopefully, there won’t be many more people who have to endure that pain.”

After Backpage’s seizure, news sites shared articles from the perspectives of sex workers. I’ve read their stories and noticed that poverty led many of them into sex work. Women who chose abortion also state financial difficulty as a main factor. As pro-life advocate Abby Johnson says, ‘No one grows up wanting to have an abortion.’ Feminists for Life’s motto is ‘Women deserve better.’ In the same sense, girls don’t dream of growing up to sell their bodies to strangers for profit. It’s a dangerous profession that comes with the risk of STDs, abuse and death. If women in the U.S. chose prostitution in spite of its dangers because of a need to feed their families and pay rent, then shouldn’t women’s rights organizations focus on aiding them with those issues?

In my work with women making pregnancy decisions, I’ve seen the pressure men put on women to abort. Women are pushed to abort because of fear or abuse or abandonment. In sex work, even ‘consensual’ situations can involve abuse from men. That is what ‘controlling women’s bodies’ looks like. Shouting that sex workers’ rights are human rights distracts from the dehumanizing abuse involved with sex work. As with abortion, claiming a harmful act brings liberation doesn’t make it so. In an article for the Independent, ‘This is what really happens when prostitution is decriminalised‘, feminist writer Julie Bindel writes:

“Across Holland, women have been imported by traffickers from Africa, Eastern Europe and Asia to meet the increased demand. There has been little or no support for women to exit prostitution, and the innate murkiness of the sex trade has not been washed away by legal benediction. As in Germany and Nevada, the close links between organised crime and prostitution has not been disrupted, and women are still being murdered by pimps and punters at an alarming rate.”

Women and children caught in trafficking are voiceless and their safety is our top priority.