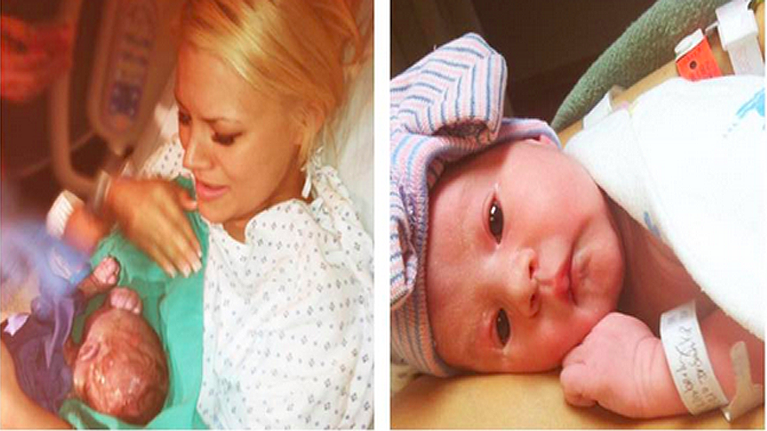 Women are often pressured into abortion, or decide to go through with one because they feel they have no other choice. But sometimes, at the last moment, women find their own strength, change their mind about the abortion, and choose life. Abortion reversal is possible.

At 20 years old, Ashley discovered she was pregnant, but the boyfriend who convinced her to have sex with him by promising to take care of her and a baby if she did become pregnant, handed her money for an abortion and sent her off to get her abortion alone. After taking the first dose of the abortion pill, Ashley regretted it and asked the abortionist what would happen if she didn’t take the second pill. She was told that the baby would die anyway, but if the baby somehow survived, he or she would be deformed…

Ashley turned to her mother, telling her about the pregnancy and the abortion and her remorse. Her mother called a local crisis pregnancy center, and that center called Dr. Matt Harrison. Harrison had no idea what to do, but told them to come to his office. After flipping through textbooks, he had the idea of injecting Ashley with progesterone, to try to “out-compete” with the RU-486 which he says acts as a progesterone counterfeit and tricks the body into acting as if the pregnant woman is having a menstrual cycle, starving the placenta and the baby.

Ashley wasn’t sure if their were risks to her or the baby as this had never been done before, but she knew she had to try it. It worked, and Ashley gave birth to healthy baby girl, Kaylie – the first baby saved by the abortion pill reversal kit. Dr. Harrison is now part of the Abortion Pill Reversal network, and doctors who can reverse abortions can be found by visiting the site or calling the hotline (1-877-558-0333). (Also, no serious risks for abortion reversal have been identified. The abortion pill itself, on the contrary, includes very serious risks on its label, including the possibility of fatal infection and fatal bleeding.)

When Autumn Barnes discovered she was pregnant, she panicked. She and her boyfriend already had a daughter, and finances were tight. Scared, she secretly went to a doctor to access the abortion pill. After taking the first dose, she immediately regretted it, telling Fox 46 Charlotte: “I just killed my baby. I have a little girl. How is it fair that I just took an innocent child’s life?”

She turned to the internet in hopes of finding a way to stop the abortion, and she found a link to AbortionPillReversal.com. She was doubtful that it would work, but she called the number to talk to a hotline nurse (1-877-558-0333) anyway.  She was connected with a doctor who provides the abortion pill reversal kit in her area. After taking the treatment, she went in for an ultrasound and was relieved to see that her baby was still alive. Months later, her “miracle” baby boy, Walker, was born healthy and he continues to do well.

Stout was already the mother of a daughter who was being raised by Stout’s parents due to Stout’s problem with drug addiction. After deciding to get off drugs, Stout moved back in with her parents and daughter to start a new life. However, she was 20 weeks pregnant and since she was trying to overcome her addiction and felt she was in no place to care for another child, Stout and her parents decided she should abort.

Stout didn’t want to have the abortion but felt she had no other choice. When her neighbor, Marina Cortopassi, an ultrasound technician, found out, she knew she had to help. However, Stout was already with the abortionist and when Cortopassi arrived, the two-day late term abortion procedure had already begun and the abortionist had placed small sticks called laminaria into the cervix to cause dilation.

But Stout changed her mind about going through with the abortion and thankfully, Cortopassi got her into the care of doctors who were able to remove the laminaria. There was still the risk of miscarriage, but a few months later, Stout gave birth to a healthy baby girl named Claire. 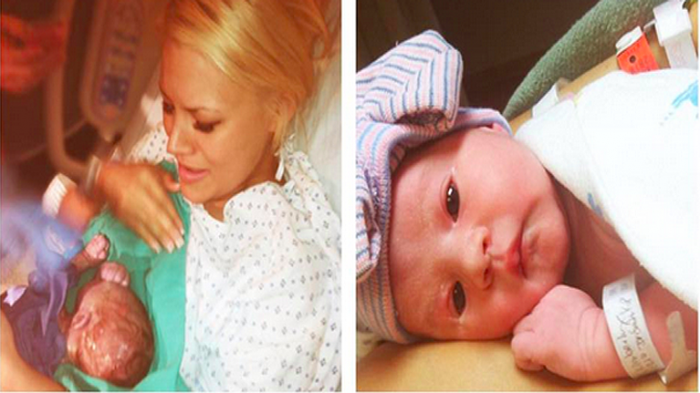 A viral internet star, Henderson was already the mom of three children, the first of whom she gave birth to at age 16, when she found out she was pregnant. Her relationship with her boyfriend was unstable and Henderson was scared of raising another child on her own. She went to an abortion facility, where she sat in the waiting room crying.

“I kept trying to justify it, but my heart was heavy,” she wrote in a blog post. “I felt like I was about to make a horrible, horrible decision, and God was giving me signs to not do it. I woke up this morning, my daughter was sick. I had to find a sitter, I got lost, my car broke down for about 15 mins and I got here late, but they still got me in. I prayed God would stop and give me a sign, give me the strength to get up and walk out of here.”

After being called in for her appointment, a card a couple had given her fell out of her wallet. It had Isaiah 41:10 on it: “Don’t be afraid, for I am with you. Don’t be discouraged for I am your God. I will strengthen you and help you. I will hold you up with my victorious right hand.”

Henderson walked out of the abortion facility and never looked back. Months later, she gave birth to baby girl – Vaida Everly – whose name means “beautiful life.” 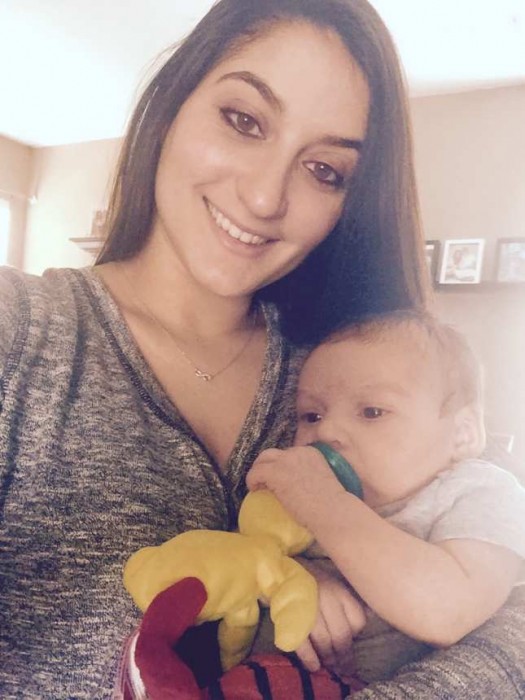 In 2014, Minichini was sitting in a Planned Parenthood exam room with an abortion pill in her hand. She didn’t want to take it, but the abortionist told her that it was expensive and would melt in her hand if she didn’t take it quickly enough, and then told Minichini that it wasn’t the right time for a baby.

She took the pill and went home to take the second one 24 hours later. But instead of taking that second pill, she went to the emergency room to try to save her baby.  The hospital staff told her that her baby would be “deformed” if the abortion wasn’t completed. Minichini called two ob-gyn doctors who both said they couldn’t help her.

She started bleeding and cramping and was scared that it was too late. She turned to the internet where she found the story of a woman who had her abortion reversed. That story led her to a 24-hour hotline number (1-877-558-0333), which led her to a local pro-life doctor. Already the mother to one small child, attending college, and going through a divorce, Buell discovered she was pregnant. Afraid she would let her parents down and lose her home, she went to Planned Parenthood for an abortion. But after taking the first dose of the abortion pill, she felt “instant regret” and sat in her car searching on her phone for a way to fix what she had done.

Buell went forward with her plan to save her baby and at the doctor’s appointment was able to see her baby’s heartbeat. She felt a huge sense of relief and months later, she gave birth to a healthy baby boy named Zachariah.

Buell now advocates for other women who change their minds about an abortion. At 16 years old, Donanne found out she was pregnant. Her boyfriend told her to get an abortion and though she never thought she would ever abort her own child, she was scared, and she went to Planned Parenthood. Even though she had just barely turned 16, she didn’t need her parents permission for the abortion. She sat in the clinic alone wondering why she was doing this.

They called her in, and while crying she asked if she could see the ultrasound screen. They told her she couldn’t. Donanne started to pray.

“All of a sudden time stopped and God was telling me to get up and leave and that everything would be ok. So I did.”

Though the next few months were tough, she gave birth to a healthy baby boy named Sean. Donanne is now married and has four children. 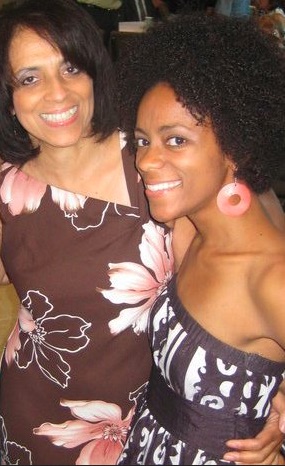 Christina’s mom walked out of an abortion clinic.

After discovering she was pregnant, Andrea was feeling pressured to abort. Her boyfriend wasn’t happy about the news and her mentor turned his back on her. Scared and feeling alone, she made an appointment for an abortion. She went alone and the counselor told her she was making the right decision. But Andrea wasn’t so sure.

She was sitting in the waiting room crying when the janitor walked towards her. This woman came close to Andrea, lifted her chin and looked into her eyes and said: “Do you want to have this baby?”

The stranger said, “Then God will give you the strength. Put on your clothes and leave.”

But Andrea went into the operating room when her name was called. There she saw a puddle of blood on the floor. She immediately changed her mind about the abortion, but the abortionist tried to convince her to go through with it. But Andrea stated: “I am leaving. I am having this child.”

She gave birth to a healthy girl named Christina who now works in the pro-life movement. McAllister had left her husband and two children for a life with another man. Regretting her decision, she went to her church to ask for forgiveness and began the process of trying to fix her marriage. But on that night, as she packed her belongings, she discovered she was pregnant.

Devastated, she cancelled her plans to return to her family and stayed in her apartment for two months before telling the father of the child about the baby. She told him she wanted to place the baby for adoption, but he said he wanted to raise the child himself.  But her husband refused to accept that. He would only take her back if the baby was placed for adoption with strangers.

Full of fear, McAllister decided that abortion would solve everyone’s problems and she went to Planned Parenthood. But after walking through the doors and seeing the tears of a young woman, she decided she couldn’t abort.

It has been difficult for her, as choosing life for her child changed the course of her life. But she knew that killing her own child because of the poor choices she had made wouldn’t take away her mistakes.

Chernocke was nearly five months pregnant back when she went to the hospital for an abortion. She told her baby she was sorry as she sat in the waiting room, but as time ticked by she felt less relief about the procedure and more remorse.

Two nurses came to take her back for the abortion, and she was led into a room where the doctor was waiting for her. He asked her if she was ready and if there was anything she wanted to say.

To her surprise, all three of them became full of joy. The doctor congratulated her and they all told her that she would never regret having her baby.

Months later she gave birth to her son David and she has never regretted her decision.

As technology advances and we learn more about life in the womb, more and more women are choosing life. But even after choosing to abort, there is hope. AbortionPillReversal.com and the hotline with nurses available (1-877-558-0333) are available 24 hours a day to help women with abortion reversal both in the first trimester and late-term as well.