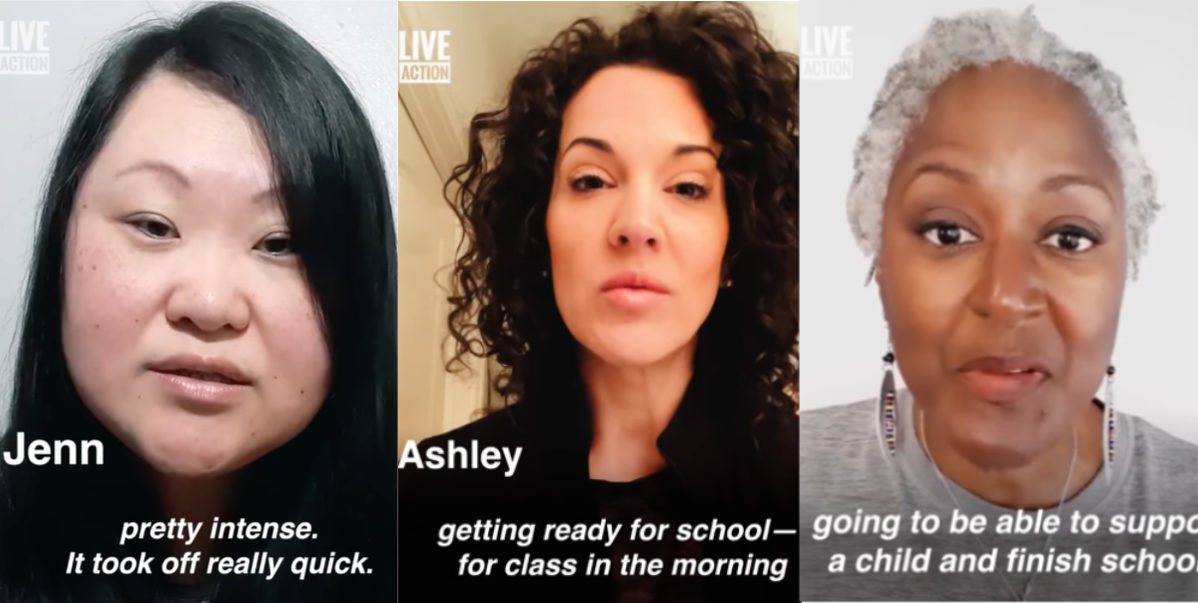 Abortion regret and trauma are real — and these women want you to know the truth. That’s the key message behind Live Action’s latest campaign, “Can’t Stay Silent.” While countless women experience trauma and pain that can last for decades following abortion, their stories are often muffled behind the voices “shouting their abortions” to the media.

Now, some of the women who have experienced the trauma of abortion and subsequent healing are sharing their testimonies. Here are a few of them:

Jenn’s story: “I just couldn’t believe what I just did”

Jenn was 22 in her senior year of college when she got pregnant by her 31-year-old fiance. Although she was hopeful that he would want to keep the baby, he demanded that she get an abortion.

“I was devastated,” Jenn says about his insistence that she abort. “I had really mixed feelings because we were engaged by this time, so I thought we could just start a family.” Her fiancé, however, told her that he would leave her if she didn’t abort their child.

“I was just kind of like in agony because I didn’t really want to do it,” she says. But I was trying to convince myself this was the right choice.”

Jenn describes regretting her abortion almost the minute she walked through the door of Planned Parenthood. She notes that the building was “sad and depressing.” Although given the option, she chose not to look at the ultrasound monitor, saying, “My heart started to break.”

She says that a horrible dread came over her after the abortion. “I just couldn’t believe what I just did.”

“From that point on, for about 20 years, I regretted my abortion. I developed a lot of self-hatred, a lot of anger, a lot of resentment toward the baby’s daddy.”

After years of regret, Jenn was finally able to find healing through a program associated with a Care Net Pregnancy Resource Center.

“If I could tell another woman who’s planning on having an abortion what to do, I will tell her not to do it. It’s not worth it,” Jenn says. “It’s just going to cause more pain. It’s not a solution for the pregnancy. The baby’s already here.” She also notes that the abortion will “create so much heartache and pain. It’s not what the industry tells you it is.”

Ashley was 18 and right out of high school when she found out she was pregnant. She now says regretfully that at the time, all she thought of her preborn baby was that he or she was a “problem.” She went to the abortion facility, noting, like Jenn, that it was a cold, gray area. She also remembers that the facility gave her medication before the procedure which left her feeling a little “out of it.”

While Ashley says she felt fuzzy at the time, she does remember the abortionist asking if she wanted to see the ultrasound, saying, “All right, there it is, do you want to see your baby?” She describes looking over. “When I looked at the screen, I saw what was my baby. It was not a blob of tissue. There was a heartbeat. I was probably about eight weeks along, and before I could say or do anything it was over,” she says. “Before I knew it my baby was gone, and a part of my spirit was too.”

Her immediate way of coping was to hide her abortion from everyone. “I was very different after that moment,” she says. “I was filled with a lot of anger, a lot of shame. Of course a lot of guilt. I hid that secret like no other secret I have held inside of me before.”

Ashley also says that she thought she could go on with her life as if nothing had happened, but instead, she said, “It absolutely changed me forever.” In fact, she later experienced infertility which doctors said was likely attributed to her abortion.

Ashley says that she did get healing for her abortion, but it took her over 20 years to get to that point. She ends offering advice to pregnant women. “It is not the end of the world. it is absolutely possible to continue on with your life even if you have a baby, if you have a child… I would encourage you to go to your local crisis pregnancy center.”

She also offers words of encouragement to other women who may also be experiencing abortion regret. “Please know that you are not any less valuable. You’re not any worse of a person… Seek out your local crisis pregnancy center for opportunities for healing and counseling.” She then adds, “Please, speak your story. Be brave. Keep your child. It is such a precious, precious gift that everybody doesn’t get to have. And I would just say to you, God will work it out.”

Sylvia’s story: “My stomach felt like it was being pulled out of my body”

Sylvia was 19, in college on a full scholarship, and had broken up with her boyfriend when she discovered she was pregnant. Feeling like she had no other options, she made an appointment at Planned Parenthood for an abortion.

Like the other women, she distinctly remembers the feeling at the abortion facility, noting that everyone there was looking down and seeming very detached, while the building was cold and impersonal. She also says that she was given medication that left her feeling disoriented.

“I heard the vacuum suction machine as it was turned on. It was a horrible sound,” she describes. “My stomach felt like it was being pulled out of my body.” Looking over while the abortion was happening, Sylvia says that she saw a lot of blood and tissue coming out of her body — even though she had been conditioned to think of her child as nothing more than a blob of cells.

After that, Sylvia says she stifled the hurt. “For a good twenty years, I really didn’t even think much about it.”

She even went on to work for Planned Parenthood for a time, offering contraceptives to young girls. But she says that she got discouraged seeing the “revolving door” of young, bright, beautiful girls who did not have any support system, didn’t know that they had other options, and were not being counseled with any alternatives.

Finally, Sylvia met a woman who introduced her to God’s healing and forgiveness. “That was my push to ask God for forgiveness, and immediately I did,” she says.

She went on to become an abstinence educator at a pregnancy resource center, but she realized she was still not able to counsel abortion-minded women because though she was forgiven, she hadn’t been completely healed. She eventually found an abortion recovery healing program through an organization called Healing Grace.

Sylvia underwent the eight-week program, saying that it brought her the freedom and peace she had been missing. “There was a freedom that came from being transparent with myself, with God. Really tapping into and reaching into a lot of the feelings that I had taken a lot of time and effort to bury.”

She now works as a ministry leader and shares her testimony with others, noting that we often learn best by hearing others’ stories.