An Illinois woman has filed a lawsuit against Bayer Pharmaceuticals for injuries related to her use of the hormonal IUD Mirena, claiming that the manufacturer caused injury because it “had a continuing duty to warn consumers, including Plaintiff and her physicians, and the medical community, of the dangers associated with Mirena®, and… negligently and/or wantonly fail[ed] to adequately warn of the dangers associated with its use….”

According to the lawsuit, Christina Day received no warning about the potential ill effects of the use of the birth control device (which is potentially abortifacient), and “no adequate warning was communicated to her physicians” about these risks, and that these “wrongful acts or omissions” on the part of Bayer caused the Plaintiff to be “permanently injured” with “past and future medical expenses… lost wages, and… increased risk of future harm.”

The accusation is that Bayer knew about the risks to women, but continued to make and market the devices “without providing adequate warnings and instructions concerning” Mirena’s use. And in fact, Mirena’s own website admits that “it is not known” how Mirena’s “actions work together to prevent pregnancy”: 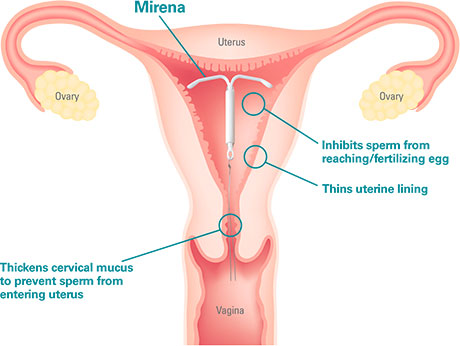 As you can see from the diagram, Mirena’s manufacturer admits that the IUD can work to thin the uterine lining, which makes it inhospitable for newly-conceived human being to implant, should sperm somehow make it through such an obstacle course to fertilize an egg. This is why the IUD can be considered an abortifacient.

Plaintiff Christina Day developed Pseudotumor Cerebra (PTC), or Idiopathic Intracranial Hypertension (IIH), from her use of Mirena, a condition which the lawsuit states “develops in the skull when a person’s cerebrospinal fluid becomes elevated, causing increased pressure. Fluid builds up in the skull and is not released and absorbed at the proper rate. PTC derives its name from the fact that the condition acts like a tumor but it is not actually a tumor.” Day’s suit also claims that had she known about the possibility that such a condition could arise from use of the Mirena IUD, she wouldn’t have used it.

According to DrugWatch.com, PTC/IIH “may cause swelling of the optic nerve and possibly vision loss. It may also be fatal”:

Researchers who examined data from the Adverse Events Reporting System run by the Food and Drug Administration found a higher than expected number of reports of intracranial hypertension.

Treatments for the condition can involve various drugs, including drugs known as carbonic anhydrase inhibitors. When medication is not successful and vision is in danger, a type of surgery called optic nerve fenestration may be performed.

A doctor may also recommend an operation to implant a neurological shunt to prevent vision loss and treat headaches.

No doubt, these are significant medical expenses for Day and others to endure.

Mirena’s website does not list the possibility of PTC/IIH among its possible side effects. Instead, listed among the “common” side effects are irregular bleeding, expulsion of the device, missed periods, and ovarian cysts. Other more serious side effects listed are pelvic inflammatory disease, uterine perforation, and even sepsis. And if you’re one of the one percent of women who get pregnant while using the device, it can be “can be life threatening and may result in loss of pregnancy or fertility.”

Certainly not all women will experience such side effects, but in truth, no woman thinks she will be one of the few horror stories. For women like Christina Day who never imagined they would be one of the few, the results of using this potentially abortifacient birth control are devastating.