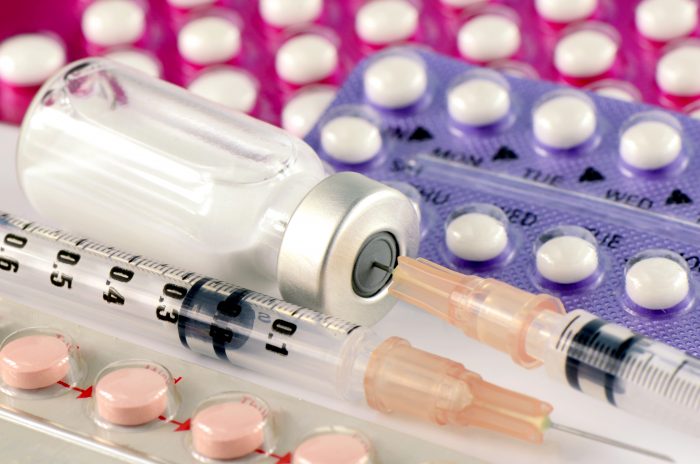 For decades, women have been putting artificial hormones in their bodies to prevent pregnancy, disrupting their natural fertility. They’ve been told that that these artificial hormones may even have benefits: that this is what they must do in order to be successful and ‘unburdened’ with children. But as modern research continues to reveal, hormonal contraception is dangerous for women.

The world at large is waking up to what pro-lifers — and the World Health Organization — have been saying for years now: hormonal birth control has adverse effects and even significantly raises a woman’s risk of breast cancer. A recent study revealed that using hormonal birth control, even the lower dose hormonal types, raises a woman’s risk of breast cancer by at least 20 percent. Depending on other lifestyle and genetic factors, some women’s risks are much higher.

Predictably, contraception advocates told women not to worry and certainly not to just “go off the Pill.” But it was something the media couldn’t ignore. Even local news stations, like this one in Minnesota, brought on experts to speak to the “16 million American women” who use hormonal birth control. Oncologist Dr. Michaela Tsai tried to reassure KSTP ABC Channel 5 Eyewitness News viewers by saying that women in their teens and 20s probably don’t have to panic, but women in their 30s and up who have been using hormonal contraception for years may want to rethink what they’re doing. For women who have trusted contraception pushers like Planned Parenthood, the abortion industry, and Big Pharma for decades on this matter, this is frankly frightening.

The rule of thumb when it comes to hormonal birth control should be, “If it sounds too good to be true, it probably is.” While the Pill itself has ugly side effects for women, other, more long-term forms of contraception — which are pushed with greater intensity so women don’t have to “worry” about taking a pill every day — are, to put it simply, a disaster for many women who have become human guinea pigs for the reproductive pharmaceutical industry.

While not considered a long-acting reversible contraceptive (LARC), the NuvaRing, with its happy, peppy, very yellow ad (below), is made to sound like a great thing. “It’s a small, comfortable, once-monthly vaginal ring that delivers a continuous low dose of hormones. It’s as effective as the Pill, but you don’t have to take it every day!” the ad cheerily states. “Break free from the pack!” the ad suggests, referring to the daily hormonal birth control pill. At the very end, while watching smiling women trade their one-piece swimsuits for more revealing ones and then climbing into a relaxing pool, viewers hear a laundry list of possible risks. But the seriousness of those risks is, again, overshadowed by the carefree picture painted by the 2008 commercial:

In reality, the picture is much more bleak. According to DrugWatch.com, “Merck & Co. agreed in 2014 to settle all claims over its NuvaRing birth control ring. Plaintiffs in more than 2,000 lawsuits alleged serious injuries and deaths from blood clots, heart attacks, and strokes.” Two hundred and nineteen lawsuits are still pending, but Merck reached a “$100 million settlement with 3,800 claimants in 2014” for “cardiovascular injuries, blood clots, pulmonary embolisms, [and] death.”

The FDA approved the NuvaRing in 2001, and ten years later funded a study of 835,826 women, which found an “increased risk of VTE [venous thromboembolism]” among women using the NuvaRing. A year after that, another study confirmed this, finding a 6.5 percent increase in VTE. Another study that same year (2012) found an increased risk of heart attack and stroke. Then, finally, in 2013, the FDA decided it was worth putting a warning label on the NuvaRing’s packaging for these side effects.

Another Merck product, the LARC Nexplanon is an implanted birth control device that is inserted into the upper, inner arm. The online ad for this device features women with serious expressions flexing their arm muscles, next to the play on words, “ARMor Up.”

The Nexplanon website warns women not to take it if they have “breast cancer or any type of cancer that is sensitive to progestin (a female hormone),” essentially admitting what a recent study revealed about how hormonal birth control increases the risk of breast cancer. 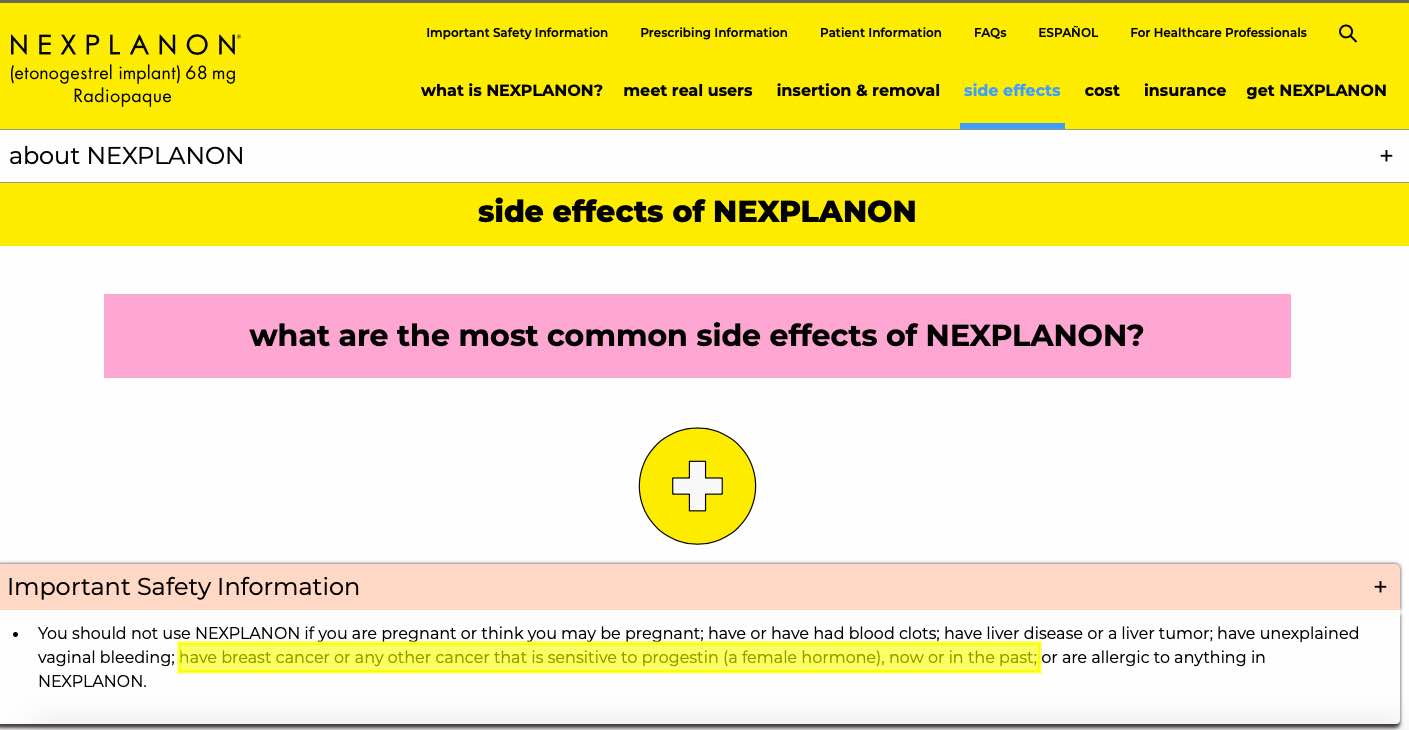 An ad for the implant also states that Nexplanon is a “small, flexible implant” that “provides up to three years of pregnancy prevention” (noting that the implant “must be removed by the end of the third year”).

According to NationalInjuryHelp.com, “Nexplanon replaced Implanon when Implanon was discontinued in 2011. Nexplanon contains the same hormone as Implanon (etonogestrel), but unlike Implanon, Nexplanon is radiopaque. This means doctors can find the implant inside the body using X-rays or other imaging if it ever moves from its original location,” which, of course, has happened to women. (emphasis added)

The website also states that a Danish study “found a 40% increased risk of blood clots in women using Nexplanon for birth control”:

The study found that women using Nexplanon were at a 40% increased risk for blood clots compared to those not using hormonal birth control.

The study also found significantly increased risks for blood clots when using the vaginal ring and the patch.

And yet, the FDA still approved the device.

Manufactured by Pfizer, Planned Parenthood touts this form of hormonal contraception as a 12-week shot which is “safe, convenient, and private.” But in its online “risks” section, Planned Parenthood lists the possibility of “temporary bone thinning” which “increases the longer [women] use the shot.” Planned Parenthood then states that “[b]one density usually comes back after they stop using the birth control shot….”

However, according to Avvo.com, “In 2004, the Food and Drug Administration issued a ‘black box warning’ on Depo-Provera, warning that long term use causes bone loss that may be irreversible.” MayoClinic.org corroborates this, stating, “[I]t’s not clear whether or not this loss is completely reversible. Because of this, the Food and Drug Administration added strong warnings to the injection packaging cautioning that Depo-Provera and Depo-SubQ Provera 104 shouldn’t be used for longer than two years. The warning also states that using these products may increase a woman’s risk of osteoporosis and bone fractures later in life.” Other side effects include depression, fatigue, weight gain, irregular periods, and more.

Planned Parenthood has its very own ad for the Depo shot, which, of course, makes it sound simple and without complication. It even states that the shot is “safe.” But, clearly, it’s not so safe. Is Planned Parenthood leaving out important information that women deserve to know, just as it does when it comes to abortion?

The Depo shot has also garnered controversy, as some believe it is promoted primarily to minorities, and therefore believe it is linked to racist, eugenicist sterilization efforts globally. Beyond that, at least one study in “The Lancet” and one in “Cancer Research” linked it to a higher risk for acquiring AIDS and “aggressive breast cancer”:

[R]esearch by Renee Heffron, funded in part by the Bill & Melinda Gates Foundation and the National Institutes for Health, published in The Lancet last year, found that injectable hormone-based contraceptives, including Depo-Provera, increase the risk of acquiring and transmitting the HIV-1 AIDS virus. Another study, published in Cancer Research in 2012, found that Depo-Provera doubled the risk of aggressive breast cancer in women who took the drug for a year or longer.

Further, Depo-Provera is extremely similar to Norplant in its ingredients and how it is formulated, with the main difference being that Depo-Provera is not implanted. Norplant was pulled from shelves and pharmacies across America back in 2002, due to many women’s claims against it. Pfizer — the company who created both Norplant and then switched to Depo-Provera without significant changes in composition — has had to settle many lawsuits over its various birth control devices and has lost in court to other women.

Tens of thousands of women initially sued Wyeth Pharmaceuticals (now part of Pfizer) for allegedly failing to warn them of the side effects, including irregular bleeding, headaches and depression. In October 2011, Pfizer settled on Wyeth’s behalf for approximately $30 million, on top of the $48 million already paid by Wyeth in 1999.

However, despite these payouts, a human rights advocacy group, The Rebecca Project, told the NC Register that vulnerable African women subjected to global family planning programs like the ones promoted by the Gates Foundation have never been compensated for their injuries.

The bottom line is that women should not be the guinea pigs of the pharmaceutical contraceptive industry, and the FDA appears to be willing to accept even aggressive breast cancer as a possible side effect to using birth control. The question is, are women willing to accept this risk? Are they even aware of the risks?

Furthermore, the same pharmaceutical companies, Planned Parenthood, and many doctors who push these drugs and devices on women, deceive them into thinking that hormonal birth control only “prevents pregnancy.” Instead, while the drugs and devices can prevent pregnancy, they also act, in many cases, to stop implantation after fertilization has already occurred. Science conclusively defines the moment of fertilization as the moment a new, unique, human life has begun. By failing to inform women that hormonal birth control can act to stop their bodies from allowing a child to implant, these companies are responsible for an unknown number of very early miscarriages.

Women do not need to chemically alter their own fertility in order to achieve their dreams. Women deserve better.