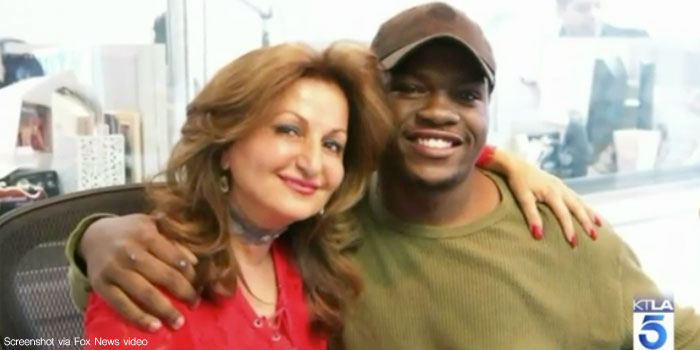 Twenty years ago, Azita Milanian was invited to go dancing with a friend, but decided to go for a jog instead. That simple decision would have life-and-death consequences. It was 1998, and Milanian had taken her dogs for a run on a trail in Altadena, California. One of the dogs, Tango, began sniffing at the ground, and Milanian made a horrifying discovery: two feet, sticking out of the dirt. She began digging and found a newborn baby boy, buried alive in a blue towel. Now, 20 years later, Milanian has finally been reunited with the baby whose life she saved. 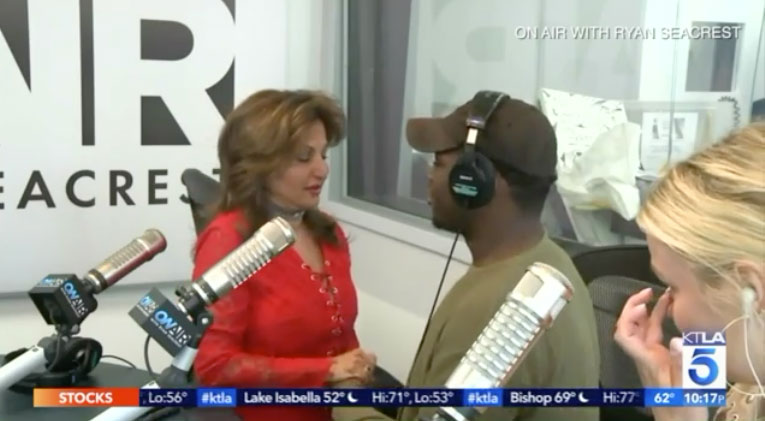 When Milanian discovered the little boy, she immediately began clearing dirt from his nose and mouth, begging him to live. “Please don’t die,” she told him. “I will never leave you. I love you.” She tried to call 911, but kept getting disconnected, so she found a passing motorist, who helped connect her to the Los Angeles County Sheriff’s Department. Milanian said she tried to comfort the baby boy the best she could, who had been crying, but worryingly, had stopped. When paramedics arrived, the little boy had a body temperature of just 80 degrees. At the hospital, he had to be treated for severe hypothermia. But the little boy, who hospital workers named “Baby Christian,” made a remarkable recovery. People from around the country sent in clothes, toys, and supplies for the baby boy, and Milanian made sure to come and visit.

As “Christian” lay in his incubator, she cried and wanted to adopt him. But because she had been featured heavily in the media coverage, she worried that the person who buried him would be able to find him if she adopted him. Still, she didn’t want to lose touch with the boy, and repeatedly reached out to child services. After a year, she was told that he had been adopted, and that she wouldn’t be able to see him. Milanian was crushed. But she took the experience with the baby boy and used it, founding a non-profit organization that helps orphaned children, Children of One Planet. But she never lost hope that she would meet him again. “I was hoping that he would find me, the same way we found each other that day,” she said.

Meanwhile, the little boy was adopted by a loving couple, and he grew up with no idea of what happened to him as a baby. Now named Matthew Whitaker, his father was a military veteran and law enforcement officer, and his mother worked in education and law. When he was 17, he finally learned the truth about his birth. But it mattered little to him. “I’m here today. I’ve lived a great life,” he said. “I was adopted into a great family. I couldn’t ask my parents for any more.” He currently plans to study journalism at the University of Arizona, and doesn’t have any ill will towards whoever it was that buried him alive. “If this was your best idea, to leave me here, then thanks, because you weren’t mentally fit to raise a child,” he said.

Whitaker’s reunion with Milanian came about after one of Whitaker’s mother’s friends wrote in to a radio station telling his story and asking for a 23AndMe DNA kit, so he could learn more about his ancestry. Whitaker agreed, and the results were read live on “On Air with Ryan Seacrest.” Patty Rodriguez, one of the show’s producers, heard about Milanian’s quest to find Whitaker again, and set about reuniting the two. When the day finally came, Milanian brought clothes and a card that read, “Happy Birthday! Baby Christian Mountain Angel Matthew.” Milanian sobbed in Whitaker’s arms when she finally saw him, while many onlookers likewise cried. “Finally, all my dreams came true,” she said.

The two drove together to the trail where Milanian found Whitaker, and looking at it, he became serious. “This could have been my grave,” he said. “You were wanted,” Milanian responded.

When Whitaker was originally found, officers from the Los Angeles County Sheriff’s Department searched for his mother, trying to find the person responsible for burying him alive, umbilical cord still attached. “We believe the mother may be a scared teenager or young adult that simply did not know what to do,” a flyer from the sheriff’s department read. Sadly, this is not uncommon; new mothers facing an unplanned pregnancy give birth and sometimes panic, believing they have no other option. But fortunately, today, across the country, there is an option: Safe Haven laws.

Babies are sometimes still found dead in trash bags and dumpsters, abandoned by scared mothers. But Baby Safe Haven Laws give women the opportunity to surrender a newborn, no questions asked, usually at places like a hospital, fire station, or police station. Other states offer Safe Haven Baby Boxes, which give mothers the chance for even more anonymity.

While Safe Haven laws are common across the country — every single state has some variation of them — Indiana has gone a step further, installing the nation’s first baby drop boxes. Monica Kelsey, a firefighter and paramedic who had been abandoned as an infant herself, founded this program. In an interview with Live Action News, she explained why Safe Haven laws are not only needed, but save lives.

READ: Decades after finding her in the woods, man reunites with the baby he rescued

“In most states, a woman has 30 days after birth to safely surrender the child at any fire station, police station, or hospital with no questions asked,” she said. “In some of these states, the girl gets free medical care to assist with the birth of the child or any complications resulting from the birth. This law is a win-win situation for all parties involved. The mother walks away with zero chance of prosecution, while the baby has the opportunity to be adopted into a loving home, and a family open their hearts and home to the child for whom they’ve prayed.”

Kelsey’s non-profit organization raises funds for the baby drop boxes, which are “padded and climate controlled,” and when a baby is placed inside, the door locks and a motion sensor notifies emergency personnel, who are immediately dispatched to the scene. The baby is taken to the hospital, given a medical examination, and then placed with child protective services to find an adoptive family.

Safe Haven laws have saved countless lives, and give women a chance to give their baby life, without fear of repercussions or reprisal.

Whitaker’s story is a miracle, thanks to Milanian, but too many others aren’t found in time. Safe haven laws can truly mean the difference between life and death.