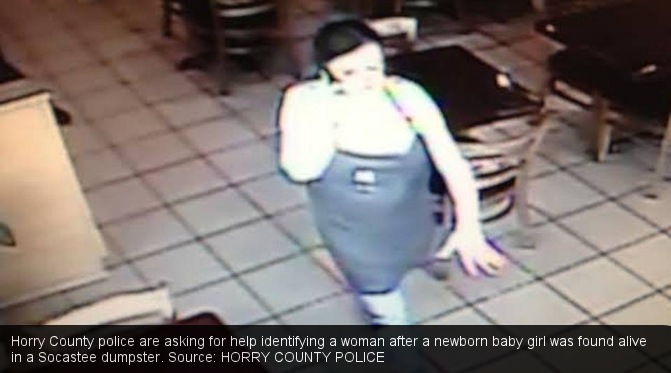 Police in Horry County, South Carolina, have arrested a woman in connection with the dumping of a newborn baby girl in a bag of trash.

On April 9, Austin Detray was taking out his garbage when he heard noises that sounded like a kitten, according to WBTW News 13. After he and some family members investigated, they found a newborn baby girl, with the umbilical cord still attached, inside a bag of garbage. She was estimated to be just a few hours old.

“I moved two bags off the top of the baby and I seen a baby’s faced smushed against one of the bags. So I grabbed that bag out,” explained Detray. “I took it out of the dumpster and I opened it up, and I kinda cleaned off the trash from the baby, off its stomach and its face.”

After asking someone to call 911, Detray leaned the baby girl on her side to help her get the mucus out of her system. He and his little brother stayed with her until the ambulance arrived.

After police released a video of a woman they believed to be the mother, the woman, whose identity has not been released, saw herself on television and turned herself in.

Detray said the child was crying, and that she’s a survivor.

“I just, I couldn’t imagine someone doing that. That’s just…it hurts me really bad to think about that.”

After the mother is charged in the crime, her identity will be released to the public.