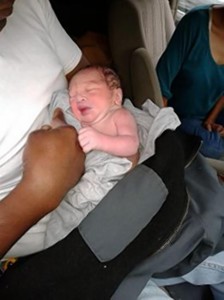 Texas maintenance worker Carlos Michel heard faint whimpering sounds coming from a dumpster at a nearby apartment complex. Michel said that what he thought he heard were the muffled cries of a kitten or perhaps a dying animal. As he neared the dumpster, the man was sure that whoever or whatever was whimpering inside was struggling.

Leaning into the blue dumpster, Carlos grabbed hold of a white plastic trash bag, pulled it out, placed it on the ground, and ripped it open to find a newborn baby boy inside. The infant, with umbilical cord still attached, was cold and purple, but still alive. “I almost had a heart attack,” Michel said.

After this modern-day Moses was plucked from the oversized ashcan, paramedics arrived to take him to Houston’s Memorial Hermann Hospital, where the small babe was reported to be in good shape.

Seems the baby’s 16-year-old mother, a student at South Houston High School, gave birth and then placed her newborn son in the plastic bag and hurled him into the dumpster, which in some circles could be considered exercising after-the-fact freedom of choice.

Since then, Child Protective Services have taken custody of the baby boy.

Describing what happened as he placed some garbage into the dumpster, Michel said that he heard the faint cries and took the bucket he had just emptied and used it to stand on to see if he could locate where the noise was coming from. Then, in a pile of empty pizza boxes, homework papers, soda cans, and scraps of half-eaten food, he located the bag and lifted it out of the dumpster. Once outside, he noticed that the bag had an outline of what looked like an upside-down baby. Carlos ripped open the plastic, and inside he found a whimpering, cold, purple newborn.

Carlos Michel, the man that saved this little one’s life, shared that it was a “shock to find a human being inside a trash bag. An indefensible [sic] baby.”

Caring more for the child than whoever the mother was, Michel wrapped the “wet,” “sticky” baby in his gray work shirt. Then, in an attempt to warm the trembling newborn with his body heat, Carlos drew the tiny boy close to his chest. According to Michel, once inside the truck’s cab with the heat turned up, the hiccuping boy warmed, and his little cheeks grew rosy.

A hero for sure, Carlos said, “I didn’t want him to die in my arms.” Michel, a grandfather to his own two-month-old grandson, instinctively cradled the baby, who never opened his eyes, and gently poked him to keep him awake until paramedics arrived on the scene.

It is unclear why, instead of tossing her son into a dumpster like a bag of garbage, the baby boy’s mother didn’t leave her newborn at a safe haven per the state of Texas’s “Baby Moses” law, which was instituted in 1999.

Then again, seeing as how 3,000 babies are aborted and tossed into red biohazard bags every day in America, maybe Mom thought putting her son into a white garbage bag and flinging him into a dumpster a few minutes after birth, in the overall scheme of things, didn’t make all that much of a difference.

Victor Senties, a spokesperson for the Houston Police Department, said that officials at the Harris County District Attorney’s Office will “determine what, if any, charges will be filed.”

“If any”? Is it now debatable as to whether it’s a crime to stuff a baby, shivering and wet with afterbirth, into a plastic bag and chuck his frail body into a dumpster to suffocate and be hauled away like trash?

Although ending fairly well, this incident is just another example of the throwaway society America has become, where the commonplace sentiment is that children are now things we have the right to throw away.

Nonetheless, thank God for Carlos Michel, a maintenance man with a huge heart, who, rather than ignore the sound coming from a smelly pile of trash, lifted a helpless little miracle out of a dark dumpster of death and placed him back into the light and warmth of life.