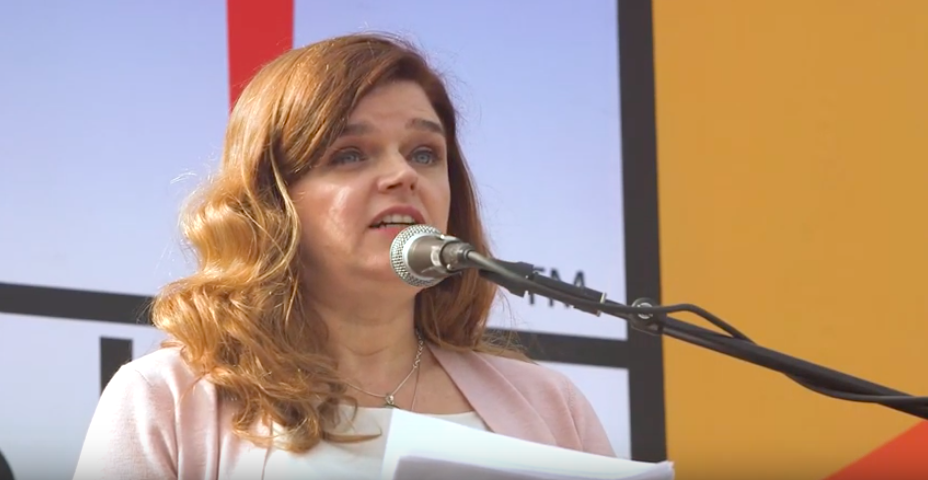 At the 2020 Walk for Life West Coast, Kathy Folan told her powerful story of choosing adoption after she was raped by an acquaintance in her junior year of college. A month later, she took a pregnancy test. She was scared, wondering what her parents, professors, and friends would think, and how her life would change if she were pregnant.

When the pregnancy test was positive, Folan was upset, but she realized the value of the life inside her. She said, “I was in a state of shock and panic, yet in that same moment, I recognized the intrinsic dignity of this newly created human being that God entrusted to me.”

Those in Folan’s life were immediately supportive. She said, “[D]espite my trepidation, [my parents] responded with love, support, and a great sense of humor…as did my friends, professors, and employers. They helped me choose life.”

Folan chose to make an adoption plan for her baby. She was inspired to choose life and adoption partly because her mother was adopted. Folan says:

My mother was born in 1945, and she herself was placed for adoption. My mom later learned that her birth mother had tried to abort her three times and failed. Thank God abortion was illegal then, as it should be now, or I would not be standing before you.

My mom met her birth mother, whom we love, when she was in her 30s, and they formed a loving relationship. And my grandmother was also grateful she hadn’t succeeded at aborting her. My grandma’s brave decision to choose adoption, to choose life, gave me a comfort level with adoption.

Folan began the search for an adoptive family for her child, and found a Maryland couple, Barry and Liz Sullivan. She says that when she met them, “We all immediately ‘clicked,’ as though we had known each other forever.”

Folan and the Sullivans independently had in mind the same name for Folan’s son: Nathan, which means “God’s gift.”

Folan’s feelings about her son, demonstrated by the name she chose, shows that pro-choicers are wrong when they claim women pregnant by rape are always traumatized by their children and always want abortions.

Folan worried that she and her parents would struggle with the adoption decision, “[b]ut when Nathan was born, my parents and I were completely at peace.”

Folan says the few days she spent with Nathan were “a beautiful experience.” Nathan was baptized into the Catholic Church during a handing-over ceremony “where Barry and Liz welcomed all who were present into their family.”

Ten months later, Folan visited Nathan. She said at the Walk for Life, “Seeing him with a family I could not yet provide, I knew then, with 100% certainty, that I had made the right decision for him.”

Later she met her future husband, who, she says, “fell in love with me the instant he heard my story.… Barry once said that the reason our story has turned out so beautifully is that our trust in God, and what has always been best for Nathan, was at the core of our relationship.”

READ: When Kathy found out she was pregnant from rape, she chose life: ‘I already loved him’

Folan is proud of her son. She said:

Nathan has an incredible resume including Eagle Scout and National Merit Scholar.  He inspired our boys to join the Boy Scouts, so they could be just like their older brother.  And now he is a successful businessman… [W]hat is most important is the love he has for all who meet him and his willingness to help anyone at the drop of a hat. …His is definitely a life worth living, as is every life.

Nathan is close to his biological siblings. They attend university in the town where he lives and “he watches over them and protects them as their relationship grows in love and respect and true brotherly friendship.”

Folan opposes the rape exception and has no regrets:

Many people, even pro-life people, say that exceptions should be made in the case of rape. As a mother, this offends me so much. Why is his life worth any less than mine? Why should he be punished to death for the crime of another? …

I say, “choose life.” Because giving birth to him is what healed me. Giving birth to Nathan did not destroy my life, as the abortion side would like you to think is the only outcome, but gave reason to a painful experience. He is the beauty that came out of a very dark place. To kill him would have meant not only enduring the pain of rape, but the guilt and trauma of knowing my child died at my own hands.…

I was empowered and strengthened by my experience, without which I would not be whom I am today….

When I look back over my life, I see the handwriting of God all over it, and it is so much more beautiful than I ever could’ve written on my own.