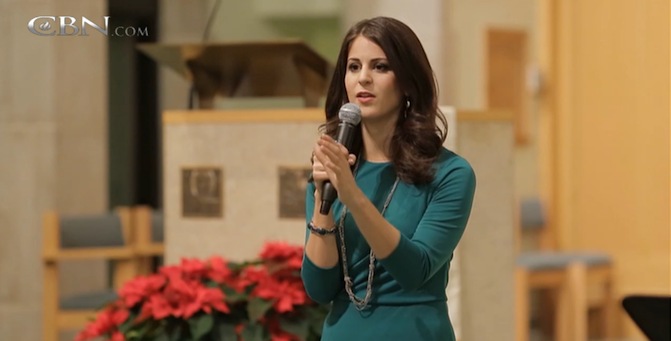 In addition to writing for Live Action News, Sarah Terzo operates a website. Called Clinic Quotes, it features hundreds of quotes from people in the abortion industry. While there, you can read Dr. Carolyn Westhoff’s court testimony on how she would “crush the head” of a preborn child during partial-birth abortions. You can also hear late-term abortionist Dr. Curtis Boyd state, “Am I killing? Yes, I am.”

Visitors frequently leave comments; many are from women who were considering abortion but chose life instead. Then there’s ones like this:

Terzo isn’t the only one facing hostility. New Wave Feminists is a pro-life organization embracing “the early American feminism of Elizabeth Cady Stanton and Susan B. Anthony.” Some people go to their Facebook page for a reasoned discussion; others hope they get raped:

Jennifer Christie actually was raped and refused to abort her son. Not everyone was happy about that: she was called “stupid,” “brain damaged,” “f–ked in the head” and “an a–hole” for not killing him. The message in one email was particularly blunt: “I want to hurt you.”

These cases aren’t aberrations; pro-life women are frequently targeted for abuse. Why is that? I think it’s partly due to how they subvert talking points. After all, it’s tough to say the pro-life message is about controlling women when women are the ones spreading it.

The way abortion helps misogynists is probably a factor too. Not only does abortion enable sex predators to stay out of jail, but “bro-choice” writers explain how they use it to  “exploit” and “use” women with “low self-esteem” and “daddy issues.”

In Michigan this year, Rep. Amanda Price and Rep. Nancy Jenkins successfully fought for tougher legislation against forced abortions. In South Carolina, Gov. Nikki Haley a signed a bill to protect pain capable children. And in Washington, Rep. Diane Black is helping to expose what the abortion industry really looks like.

The victories aren’t just political. Former Planned Parenthood clinic director Abby Johnson founded And Then There Were None, an “organization that exists to help abortion clinic workers leave the abortion industry.” Abortion survivors Gianna Jessen and Melissa Ohden have spoken on how they were no less human before their deliveries than they were afterwards. And while leading Care-Net, Melinda Delahoyde helped connect pregnant women with material and emotional support along with information about parenting and adoption.

Meanwhile, other women have demonstrated that they didn’t need abortion to achieve their dreams. Olympic boxer Claressa Shields refused when a cousin asked for help getting an abortion. Shields offered to adopt her baby instead, and then went on to win back-to-back gold medals.

Lila Rose is the founder of Live Action, and she isn’t shy about calling abortion “an atrocity.” As long as she keeps doing that, the hate some have for her isn’t going to stop.

The good news? She won’t either. I doubt she’s alone.