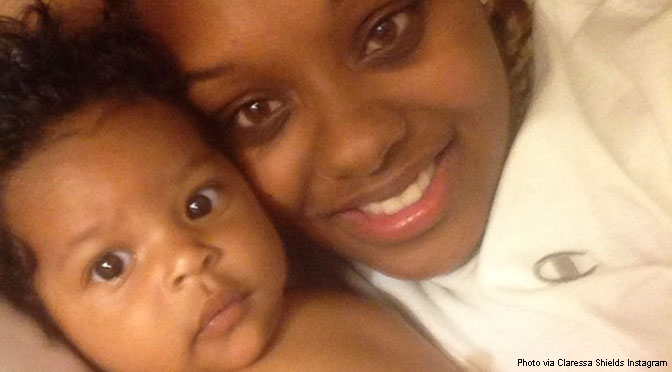 (Newsbusters) Claressa Shields made history in Rio as the first U.S. boxer to win back-to-back gold medals. But while the major media outlets praised her historic win, they forgot about her most important personal win.

On Monday, the 21-year-old credited God for her success on Good Morning America after ABC anchor Amy Robach referenced her “difficult childhood.”

How Shields’ past was difficult, Robach didn’t say. But it’s a story well worth telling.

Shields grew up in Flint, Michigan with a father in jail and a mother with drug problems and male “acquaintances” who, Shields said, raped and sexually molested her. Her family relied on food stamps that, she believes, her mother sold for drugs – because food rarely appeared on the table. And when her cousin begged her for abortion money, Shields decided to adopt the baby as her own while a teenager.

Shields revealed to ESPN the story of how she adopted her cousin’s baby in 2014:

A lot of people don’t know, but I adopted a little girl. She’s about 6 months old now. Her name is Klaressa Shields like mine, just spelled with a K. My cousin had her. She already had two kids; she didn’t want to have another. I told her I wanted to have a baby after the Olympics but with my career and everything, I can’t afford to get pregnant right now. So she decided to keep the baby, and now the baby lives with me. I was there for her birth and got to cut her little cord. It was scary seeing her come out. I was like, “What is going on here?” We’re still going through the adoption process, but I have her when I’m at home. When I leave, my best friend’s mom and her birth mother have her.

A year later, at 19-years-old, she told Yahoo Sports even more about baby Klaressa. Her cousin had wanted to abort Klaressa, but didn’t have the $500 to pay for it.

“I told her I didn’t believe in abortion and so I wasn’t giving her any money to do that,” Shields stressed.

When her cousin later raised $400, she again asked for Shields’ help – to pay for the last $100.  That’s when Shields pointed to another option.

“I really wanted a baby myself and I wanted to have one when I turned 18 right after I won the [2012] Olympics,” she told Iole. Because she couldn’t get pregnant while training for the 2016 Olympics, she told her cousin, “You have the baby, and I’ll adopt her.”

And that she did. Shields took Klaressa home and readjusted her schedule to care for her. On the days she couldn’t find a sitter, she opted for training at home instead of going to the gym.

“I’d shadow box for an hour-and-a-half with the baby right there,” she said.

“I’m going to give her the best of everything, and I’m going to protect her like no mother ever protected her baby,” Shields stressed to Iole at the time. “I just love having her, even though it’s a huge responsibility. It makes me slow down and think, and that’s a good thing.”

But she (and longtime boyfriend Ardreal Holmes) only lived with Klaressa for about eight months, according to USA Today editor Bob Velin in 2015.

“It didn’t go through like it was supposed to,” Shields admitted to Velin. While her cousin “didn’t want anything to do” with Klaressa at first, she later changed her mind and demanded visitation rights as well as “a lot of other things.”

The situation climaxed when Shields confronted her cousin about stealing something from her. “[T]next day she showed up with the cops at my house and said that I had kidnapped the child,” Shields told Velin.

“I could’ve went to jail when she called the cops on me. I had to explain to the cops that this child has been staying with me the last eight months,” Shields said. “Everything she has is here. Her milk, her car seat, all her clothes, everything is here.”

In the end, Shields forgave her cousin and gave Klaressa back to her.

“It was very hurtful, but after all that I still forgave her and wanted to talk about the baby,” she said. “But she wanted all these exceptions put in the adoption contract. It was too much for me. I said, ‘I’m not going to let you control my life.’”

Afterward letting Klaressa go, Shields became sick for weeks and lost a significant amount of weight. But for Shields, setbacks translate into a challenge to move forward.

“[N]ow I’m able to focus more on training,” she said, looking at the silver lining. “I still think about the baby all the time but it was like, maybe it wasn’t time for me to have a child.”

But it was time for her to save a child – a child that likely wouldn’t be alive today if not for her.

And, as she told Iole, she has an important message for other girls struggling to survive life’s challenges.

“If you’re a girl and you’re having a bad day and it seems like it’s never going to get better, think of me,” Shields said. “Look what I’ve done. Look what I overcame. I did it. I dreamed about reaching a goal and I made it happen. You can, too. I’m living proof of that.”

Editor’s Note: This article was originally printed at Newsbusters on August 23, 2016, and is reprinted here with permission.