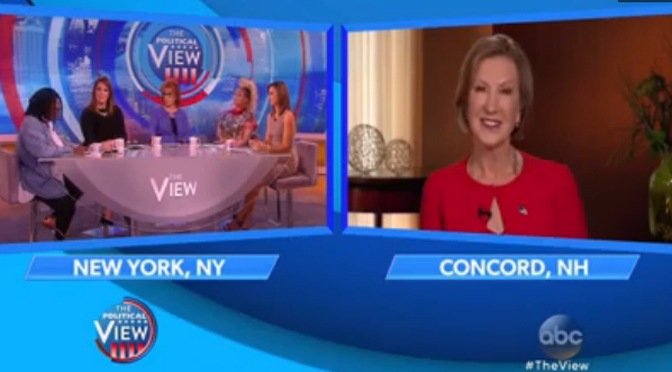 Donald Trump wasn’t too popular on The View a couple months back. Trump had disparaged Republican rival Carly Fiorina’s appearance, and Joy Behar called him out, asking, “Why don’t you talk about her brain, instead of her face?” Behar made clear that attacking someone’s looks is just unacceptable. Well, except when she does it; then it’s totally fine.

Following a televised debate, Behar said Fiorina’s face resembled “a Halloween mask,” while co-hosts Michelle Collins and Whoopi Goldberg joked that she seemed “demented.” Of course, they didn’t just insult the former CEO. When she came on the show, they also took time to argue with her. Badly.

After Fiorina alluded to Planned Parenthood’s history of performing late-term abortions and collecting fetal organs, Goldberg declared that “no one is harvesting baby parts.” This would be news to Dr. Deborah Nucatola. She’s Planned Parenthood’s Director of Medical Services, and according to her, she’s gotten “very good” at it…

In an undercover video released by the Center for Medical Progress, Nucatola is shown meeting with individuals claiming to be fetal tissue buyers. At three minutes and forty-three seconds, Nucatola describes how she can abort children while still salvaging their organs:

As you read the word “crush,” keep in mind that there’s evidence a fetus can experience pain at 20 weeks. Nucatola aborts them at 24.

That it’s illegal to alter “the timing, method, or procedures used to terminate the pregnancy… solely for the purposes of obtaining the tissue,” doesn’t seem to be a problem for Dr. Nucatola. In fact, she brags about her ability to do so. It’s not a problem for Dr. Mary Gatter, president of Planned Parenthood’s Medical Directors Council, who on another video says:

Does Gatter worry about “violating” her patients’ trust? Apparently not:

Two minutes and twenty four seconds into the second video above, Gatter is asked how much money she expects to get for supplying “intact tissue.” Given that federal law makes it illegal to profit from such a transaction, you would expect her to respond with something like, “That would depend solely on our expenses.” Instead, she says, “Well, why don’t you start by telling me what you’re used to paying?” Gatter also makes clear that she doesn’t like “low-ball” offers. What would she like? “A Lamborghini.”

This conversation wasn’t unique; you can find footage of other Planned Parenthood officials talking about how lucrative tissue “donation” can be. Granted, there’s another source of revenue that’s been even more helpful to them.

Every year, Planned Parenthood receives over half a billion dollars in federal funding. Pro-lifers are trying to redirect that money to community health centers, places that provide care to almost 23 million people. Unfortunately, the White House and their allies on Capitol Hill won’t let it happen. You can register your thoughts on that by signing Live Action’s petition. It’s available here, along with more proof of Planned Parenthood’s wrongdoing.

I can understand why the hosts of The View would rather mock Carly Fiorina than debate with her. After all, the facts aren’t on their side. The good news? Those facts are motivating pro-lifers, and we’re going to keep fighting to change them.