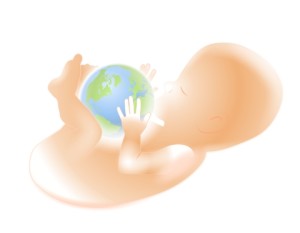 We have seen supporters of late-term abortion oppose common sense legislation which bans this barbaric procedure. This was the case perhaps most notably and recently in Texas. We’ve seen what lengths such abortion advocates will go to, as well. And abortions performed this late in our country are usually on healthy women, with almost one-third of them having had an abortion so late before.

Those who support this practice have not only failed to come to terms with what a gross human rights violation late-term abortion is, but they also may not be aware of what a vast minority the United States is for allowing abortions to be performed so late. Or perhaps these pro-aborts just don’t care. Either way, it’s worth breaking it down.

The United States is only one of four countries in the entire world which allows abortions to be performed so late, and for any reason. You read that right. We are one of four out of 196 countries in this world. As Kirsten Powers pointed out in her piece, “I Don’t Stand with Wendy Davis,” which has been referenced by Live Action before:

One can assume I am also not the only woman in America who is really tiring of the Wendys of the world claiming to represent “women’s rights” in their quest to mainstream a medical procedure—elective late-term abortion—that most of the civilized world finds barbaric and abhorrent. In many European countries, you can’t get an abortion past 12 weeks, except in narrow circumstances.

So, if those who support late-term abortion claim to “stand with women,” or “stand with the majority,” we at leas know that they really don’t. Us pro-lifers and quite frankly, just about the rest of the world have come to figure something out about late-term abortion that they can’t seem to realize or care enough about.. The following is the re-printed piece, “Abortion Commonality: America, Canada, China and North Korea,” which I wrote for the Summer 2013 edition Live Action’s The Advocate, a pro-life magazine distributed to campuses.

For population control, women are forcibly aborted right up until birth under China’s One Child Policy. Vice President Joe Biden, at Sichuan University in Chengdu, China on August 21, 2011, said that he “fully understand[s]” the policy and that it is one he is “not second-guessing.”

Last June, word came out that a woman in China, Feng Jianmei, was beaten and dragged away by family planning officials when she was seven months pregnant. The picture of her in bed with her aborted child lying next to her has circulated the web since Womens Rights Without Frontiers President, Reggie Littlejohn, broke the story with the information they obtained from a China-based group, 64Tianwang.

Reports were circulating over recent months that China was going to consider relaxing its One Child Policy. But Littlejohn has warned that unfortunately, this is not to be the case.

In North Korea, late-term abortions are also forced and are performed based on the ethnicity of the child. They are routinely performed on women who have fled North Korea and were brought back and imprisoned for their defection. Unfortunately, Canada and the United States join China and North Korea in being two of the four nations to allow late-term abortion for pretty much any reason.

Canada has no laws restricting abortion. This is not an exaggeration; taxpayer-funded abortions happen at any time in a pregnancy for any reason.

An Angus Reid poll from January of this year showed how a majority of Canadians are ignorant of all this. In fact, abortion is not even debated in Canada. For example, it has recently come to light that 491 babies who were born alive in Canada after failed abortions from 2000-2009 were killed. Yet in late January of this year, when pressed on this horrifying news, Prime Minister Stephen Harper merely responded that “abortion is legal in Canada.”

Is the United States worse off than Canada? In 1973, in the infamous Roe v. Wade decision, the U.S. Supreme Court ruled that states have the right to limit abortion in the third trimester.

However, states must permit abortions even in the third trimester for the “life or health of the mother.” But what does “health of the mother” mean? According to the Roe companion case Doe v. Bolton, a whole host of things. The Court stated, that “The medical judgment may be exercised in the light of all factors – physical, emotional, psychological, familial, and the woman’s age – relevant to the well being of the patient. All these factors may relate to health.” Women can have an abortion for any reason, then, considering that you can come up with pretty much any reason to fit into one of these all-encompassing categories.

While conditions for performing abortions may be different in the United States from those in China, the fact always remains that pre-born children suffer agonizing and excruciating deaths. And no matter where they occur, late-term abortions pose more risks for the mother as well. Arizona’s law was named the Mother’s Health and Safety Act for a reason.

Late-term abortions not only pose health risks for the mother; they can kill her. This past February, Jennifer Morbelli was killed by a late-term abortion at 33 weeks, as was her daughter, Madison Leigh. As Jennifer was suffering unto death from her abortion, Dr. LeRoy Carhart, who performed the procedure, could not be reached. Dr. Carhart tells his patients not to go to the emergency room, but rather to reach him at a contact number. Considering that the number provided was for his wife’s horse equipment business, and considering he left town with his wife, it’s sadly not so surprising that the Morbelli family could not reach him. By the time they took Jennifer to the hospital, it was too late. She died from Carhart’s handiwork on February 7.

It is bad enough that governments in China and North Korea employ forced late-term abortions. The United States and Canada should be ashamed of themselves for providing and promoting the same procedure which, when done elsewhere in the world, is regarded as a human rights violation.