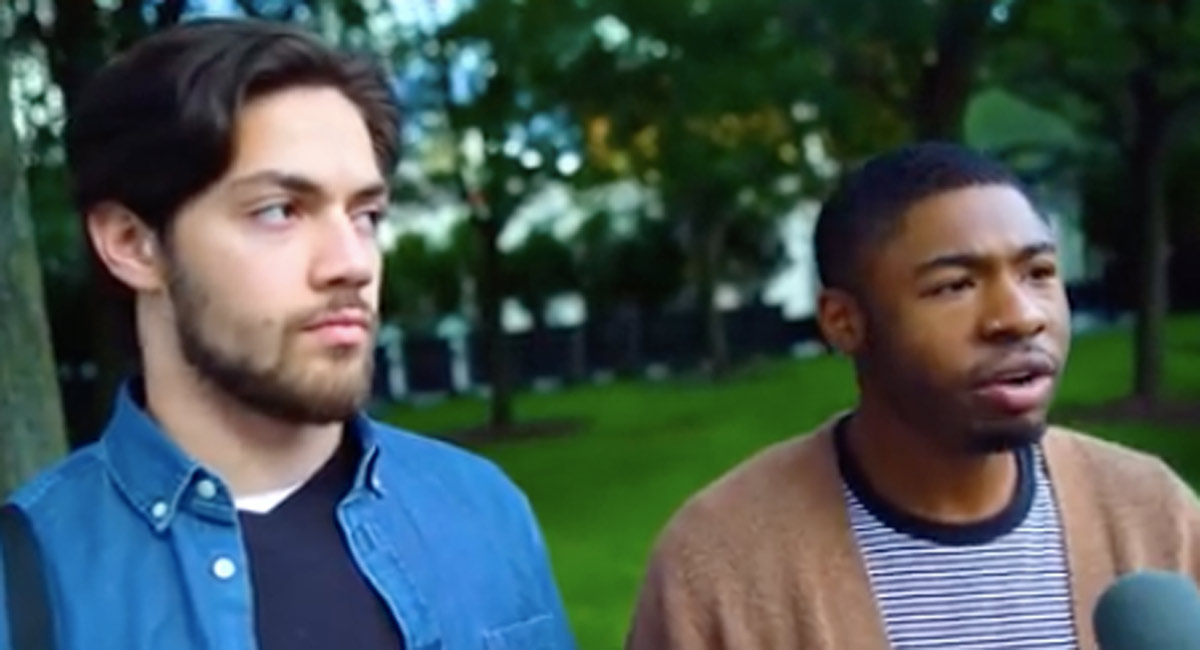 For many pro-lifers, the road to ending abortion begins with changing hearts and minds. While many Americans say they support Roe v. Wade, the reality of what abortion procedures are like continues to be elusive to most, as abortionists tend to not advertise just how gruesome these procedures are. But what happens when people are confronted with the truth?

The second man, while he still said that it should ultimately be a woman’s decision, said that he personally thought abortion should be restricted to the first trimester. “I think the best time to do it is before the baby actually has, like, a heartbeat,” he said. “So you’re at least not killing a life, and you’re just killing, like, the process.” He then explained that he thought the baby’s heart starts beating at around two months, which is when the baby starts becoming a human being. (A baby’s heart actually starts beating just three weeks after fertilization.)

The first man affirmed that he supported abortion through all three trimesters of pregnancy, while the second explained that while he thought it should be a woman’s choice, the humanity of the preborn child should be considered. They were then shown a video of a first trimester dilation and curettage, or D&C, procedure, through a 2D animation narrated by former abortionist Dr. Anthony Levatino. Things changed after they viewed the video:

Afterwards, they were asked to describe what they saw. “This is a weighing video,” the first man said. “Definitely can change a person’s mind… [s]eeing it even from an animation standpoint of it — still, it’s — one word? Changing. Definitely changing.” “God… that’s it, God,” the second man said, in clear disbelief. “That’s like, mutilation right there, bro.” Both admitted they had no idea what the procedure was like before viewing the video, and the first man described it as “monstrous,” while both said it had changed their mind about abortion restrictions, now believing that it should be restricted to within the first month.

In the second video, another man told Live Action he supported legal abortion. “I believe, because it is their body, they should have the choice on what they want to do with that baby,” he said. “That’s usually my opinion on it.” He admitted that he hadn’t done much research on different abortion procedures, but guessed that he supported restrictions keeping it in the first trimester. He was then shown the same video of a D&C, narrated by Dr. Levatino.


READ: ‘Heartwrenching’: Watch as they change their minds about abortion in minutes

Afterwards, he seemed surprised about the procedure. “Just especially seeing the suction part of that kind of, uh, changed my mind a little,” he said. “Just, I think that — I think I had the pre-notion that every life deserves a chance, and then I also wanted to have this conflicting view of letting the person whose body it is make that choice, but seeing that, it just puts me in a moral quandary of sorts.” He admitted that it was a hard decision, and that he couldn’t imagine how difficult it must be for women facing crisis pregnancies. “I want to be pro-life,” he said. “But I also want to be — or allow people that freedom to make their own decisions and sometimes that’s just the conflicting view of it where you can’t — you can only be one or the other.”

‘I just saw a baby being torn apart’

In a third video, another man said he thought abortion was a woman’s choice. “Because sometimes they’re not financially ready, or they’re too young, because sometimes unplanned pregnancies happen when you’re a teenager,” he said. “I just feel like all these laws with abortion and stuff are, you know, probably too excessive, and people are having protests about it … I just feel like abortion should be the woman’s choice and not, like, illegal.” When asked about when the cut-off for legal abortion should be, he replied, “I don’t know, maybe before it develops the brain, or you know, it develops a body.” According to the Endowment for Human Development, brain waves can be measured approximately six weeks after fertilization.

This man was again shown the animated D&C video with Dr. Levatino.

Afterwards, he looked shaken, and said he felt saddened by what he saw. “I just saw a baby, like, being torn apart,” he said. “It’s a baby. It’s still a human being. I feel like it should have rights.” He added that once the baby is developed, he or she should be protected. “I did not know that the baby would be torn apart like that,” he admitted.

When people are confronted with the truth about abortion, it can become harder for them to support this kind of violence. The truth is, no human being should be subjected to violence just because they are vulnerable, small, or inconvenient.