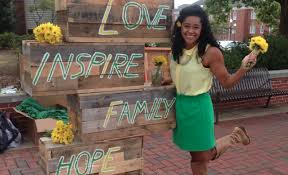 Last weekend, Auburn University students elected Molly Anne Dutton as their 100th  Homecoming Queen and her story became national news. It wasn’t just her bubbly personality or her true beauty that inspired a campus to rally behind her, but her love of life and her life story. If it hadn’t had been for the strength and determination of her birth mother, Molly Anne would never had been born.

Molly Anne’s story is one that should make any woman facing an unplanned pregnancy reconsider the thought of abortion. Her biological mother was sexually assaulted and became pregnant with Molly Anne. But the mother’s husband failed to support his wife, telling her to either abort her baby or he would leave her. She choose her baby.

With the help of Lifeline Children’s Services, a Christian adoption agency based in Birmingham, Alabama, Dutton’s birth mother was able to place her child for adoption rather than abort her. In fact, it was a member of the board of directors for Lifeline Children’s Services who would adopt Molly Anne just two days after her birth. She became the youngest of six children, four of whom are adopted.  In her campaign video, Molly Anne says:

Because that resource was made available to my mother, she decided to give birth to me. And here I am talking to you guys 22 years later.

With the slogan “Light Up LIFE”, Dutton is working to educate the Auburn campus and the world that adoption is a beautiful gift and can light up even the darkest of situations. Fellow students rallied around her and soon Molly Anne’s story made it to Glen Bleck’s website The Blaze. In less than a week, her story has become a main fixture on news channels.

In her video, Molly Anne says that she wants women who become unexpectedly pregnant to know that they are not alone, that there are resources to help them. She is using her campaign to raise money for Lifeline Children’s Services, which she credits her life to, in order to help other women and children.