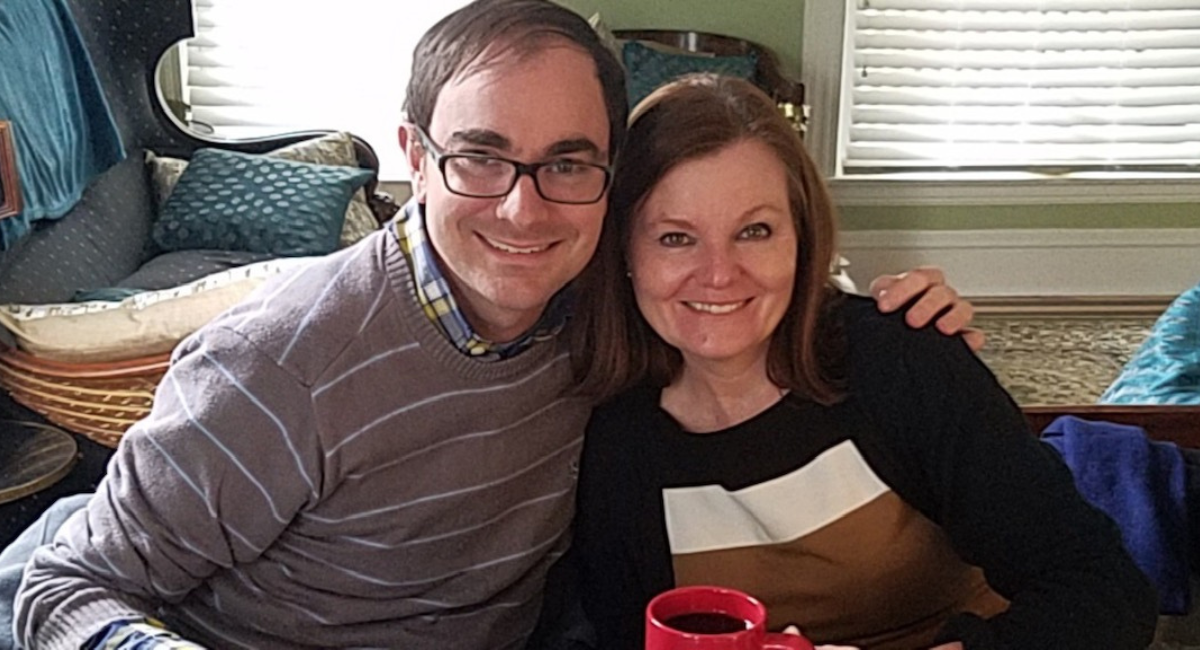 An unplanned pregnancy while in college led a young woman to fear the consequences. Initially, she considered abortion, thinking it would help her hide the mistake from her parents. But instead, she realized she couldn’t take her child’s life, and carried the pregnancy instead. Today, her son is an adult who helps advocate for other preborn lives, with both working together to help mothers and their children alike.

Pregnant, with nowhere to turn, Kathy Philbin walked into a clinic, wondering what to do. She was a senior in college, away from home studying at Niagara University so she could hide the pregnancy from her parents – at least initially. The clinic provided her with information about abortion, and a referral list of OB/GYNs should she decide to continue her pregnancy. She was neither advised to terminate her pregnancy nor to keep her baby, so the decision rested on her shoulders alone.

“I was raised in a Catholic household, with three sisters and I knew my pregnancy would embarrass the family,” she told Live Action News. “I had a friend who had gotten pregnant, and her parents forced her to have an abortion. At the time, I wasn’t sure what to do. Luckily, I was ‘hidden’ away at school, so I had some time before my parents found out.”

After three agonizing nights, weighing her options, and knowing if she had an abortion, her parents would never know, the choice to keep her baby became clear.

READ: Pastor’s daughter chose life in an unplanned pregnancy, and ministers to others today

“I didn’t want to face Jesus someday and have to answer as to why I killed my baby,” Philbin said. “That’s not a discussion I wanted to have. While I did briefly contemplate having an abortion because it would have been the easiest way out, I felt as if my guardian angel was pulling me back from a decision I would deeply regret.”

Yet she was afraid to tell her parents, thinking she would suffer the same fate as her friend. She knew her mother especially, would be devastated. She waited until she was 30 weeks to inform her parents of her pregnancy.

“My parents were clearly distraught about the pregnancy but also about me having premarital relations,” she said. “But I thought I was in love with my boyfriend at the time. They told me if I was younger, they would have insisted I place the baby for adoption.”

Philbin’s parents continued to pay for her nursing education, but because she was attending a Catholic university, she was required to move off campus. She felt as if she was branded a scarlet woman, that her teachers were judging her harshly behind her back. But when she graduated, she received a standing ovation from her classmates. Two weeks later, she gave birth to her son, Andrew.

“Other women came up to me at graduation revealing they, too, had gotten pregnant but had an abortion,” Philbin said. “They commended me on my courage to continue the pregnancy. It was as if I was human like the rest of them but unlike them, I chose life, something they were afraid to do because of possible repercussions.”

While her boyfriend wanted to marry her, he, like most of his family, wrestled with alcoholism, so Philbin eventually cut ties with him when Andy was seven months old, moving back to Northeast Ohio to stay with her parents.

Philbin said, “I wanted Andy to succeed in life and although his dad loved him, I didn’t think he would be a good influence.”

A lifetime of pro-life service

Working nights as a nurse and struggling to live with her parents, with whom she had a tenuous relationship, Philbin longed to marry a caring man. But her dating life was nonexistent.

“I was so depressed and prayed for God to send me a partner,” Philbin said. “I wanted to live on my own and have more children. Ultimately, I met an orderly at the hospital; we married and had a daughter. My husband eventually adopted Andrew.”

For his part, Andrew Philbin grew up in a stable household. A passion for flying led to a rewarding career as a commercial airlines pilot. Yet he didn’t know much about his mother’s story. When he was in his early 30s, Philbin felt compelled to go back to church, having been away for 22 years after having temporarily gone down the “wrong path” while in high school. He didn’t know how to live his faith actively, though, and wondered what to do. He soon got his answer after learning about the 40 Days for Life campaign.

“While on a layover in New York City, I felt led by the Holy Spirit to stand on the sidewalk at the Manhattan Planned Parenthood on Beeker Street in Margaret Sanger Square,” he explained. “As I stood there alone in the rain, I noticed people wearing white lab coats staring at me out the window. A young girl came up to me with tears in her eyes and told me she had taken the abortion pill and asked me to pray for her. I told her it was okay and directed her to the Sisters of Mercy pregnancy center.”

READ: ‘God grew courage where there was none’: My story of unplanned pregnancy and adoption

He told his mother of his experience and was astounded to learn of her story. Back home in Cleveland, he joined others on the sidewalk in front of Preterm, but was concerned at hearing shouts of condemnation from pro-life advocates gathered there to women walking by.

“The signs they held were very graphic,” he said. “These people were well meaning, but needed some guidance. I prayed someone would come along and better organize this.”

As he traveled and joined advocates on the sidewalk in various cities to pray, he observed the compassionate way in which they interacted with women. After doing an internet search regarding sidewalk training, and talking with sidewalk counselors in Dallas, he learned about Sidewalk Advocates for Life. He became involved with the organization, and spearheaded the first training in Cleveland on December 12, 2020, which 37 people attended. Despite a busy flying schedule, Philbin now serves as Cleveland Program Director, and has scored some impressive wins, one in partnership with his mother who now works as a midwife in Florida. Previously, she served on the Board of Trustees for the Cleveland Pregnancy Support Center.

“There was a 16-year-old girl in Preterm awaiting an abortion when her mother came by and said she regretted signing the consent form,” he said. “The security guard prevented the mother from pulling the girl out, so I called the police who removed her from the waiting room.

“The young lady was very angry. My mother tried to pacify her, but she told my mother she had no idea what it was like to face an unplanned pregnancy. My mother calmly told she did and pointing to me said, this is my son, my unplanned baby.”

It was a pro-life partnership that only God could orchestrate. A few days later, sidewalk counselors followed up with the girl and her mother, and helped her with supplies and financial support. She decided not to terminate her pregnancy.

Despite the wrath of her parents for her unexpected pregnancy and the early struggles, mother and son enjoy a loving bond and are united by a common mission: to save the lives of preborn children.