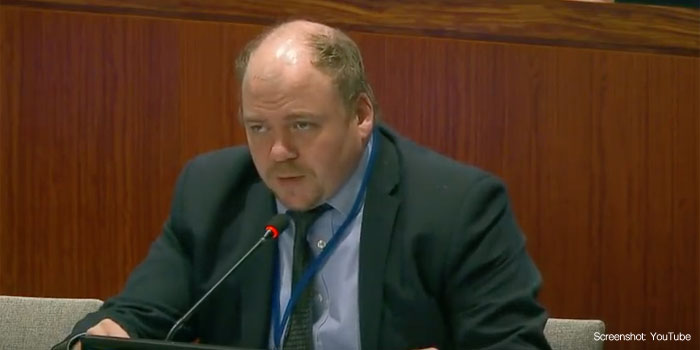 In April of 2018, Center for Family and Human Rights (C-FAM) representative Stefano Gennarini gave prepared remarks at the United Nations Commission on Population and Development. But it was his extemporaneous remarks given just moments before that spoke directly to the fact that the United Nations views abortion as a solution for population problems rather than a tragedy:

Before I give my prepared remarks, I just wanted to remark and how chilling and worrying it is to hear colleagues speak about abortion in such a casual way. I’d like to remind everyone that every one of us began our life as an embryo, and throughout this period before birth, we had possessed inherent dignity and worth, as the Convention on the Rights of the Child recognizes.

In his prepared remarks, Gennarini emphasized that “… the family does not receive the attention it deserves by the international community. It seems the only context in which we can talk about the family and human rights is in the context of family planning and preventing births.”

He also noted that “the universal declaration of human rights… affirms that the family is entitled… entitled… to protection by society and the state,” adding that the breakdown of the family unit is also devastating to society in terms of things like human trafficking. “When a family breaks up,” he said, “it also deprives persons of their first line of defense against exploitation and abuse.”

Gennarini added that the UN is “often forgetful of already existing benchmarks for protection of the family, agreed internationally” regarding things such as “realizing the right of children to know and be cared for by their mother and father.”

The United Nations seems to align itself against countries espousing pro-life ideals, even labeling pro-life Ireland, which has one of the lowest maternal mortality rates in the world, “cruel” for banning abortion except to save the life of the mother. However, as former abortionist Anthony Levatino explains, abortion is actually never medically necessary. The UN had, at the time, called for Ireland “to immediately make an exception to abort children with fatal defects.” The United Nations has been vocal about its philosophy that those with disabilities are somehow less worthy of life than others.