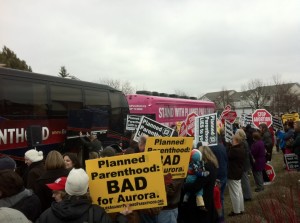 On February 21, 2014, Cosmo printed an article called “6 Women on Their Terrifying, Infuriating Encounters With Abortion Protestors.” The article was intended to illustrate why “buffer zones” are supposedly necessary outside abortion clinics. Cosmo opposes the free speech rights of even peaceful protestors, apparently believing that women should be allowed to enter an abortion clinic without anyone nearby who could possibly change the women’s minds.

In three of Cosmo‘s stories, the protestors talk to the women entering the clinic. In two of the stories, the protestors only hold signs. Both of these actions should be – and are – protected by the First Amendment. People in the United States are indeed allowed to actively express a different opinion, and they are allowed to attempt to convince another person to change her mind.

In one of the stories, the protestors actually touch the women by throwing doll parts with red paint at them. If this actually occurred, it is assault and battery, and most protestors who engaged in this type of illegal action would be reported and arrested. This obviously goes beyond First Amendment rights and is a bit terrifying.

However, if we really want to talk about terrifying and infuriating, let’s talk about the following two encounters that women have had with abortion doctors. I’d say these doctors are a bit more terrifying – and much more harmful – than protestors holding signs showing the reality of abortion. These kind of stories illustrate why there are protestors outside of abortion clinics.

Care to side with equality and print these stories, Cosmo?

From an earlier Live Action article by Heidi Miller:

[W]hen Byer arrived at the Planned Parenthood clinic [in Colorado Springs], it was determined that her pregnancy was too far along to be terminated through the use of a pill, therefore a surgical abortion was recommended. Ms. Byer agreed upon the condition that she would receive IV anesthesia, for which she would be charged extra.  Although the employees could not get the IV started, the doctor came to start the procedure anyway.

At this time, the Planned Parenthood Doctor turned on the vacuum machines and told Plaintiff it was too late to stop.”

Seven minutes later, due to Ms. Byer crying from pain, the procedure finally stopped. She received an apology and a prescription for a painkiller and antibiotics and was sent on her way. Planned Parenthood never followed up with her.

About two days later, Ms. Byer went to the hospital due to pain and bleeding, where it was found that part of the aborted baby was still inside her, resulting in an infection. She had to have emergency surgery.

Most babies come out of abortion as torn and bloody parts of this precious whole.

From a news release by Alliance Defending Freedom:

…Itai Gravely, claims [abortionist, Rodney Lee] Stephens forced her to proceed with an abortion against her will and then left her baby’s head in her womb.

“A woman’s life and health is more important than an abortionist’s bottom line,” said Alliance Defending Freedom allied attorney Jeremiah Dys, president and general counsel of the Family Policy Council of West Virginia. “What Stephens and Women’s Health Center did to Itai is beyond the pale. She has been exposed to extraordinary cruelty, and her life was put in jeopardy.”

Gravely v. Stephens, filed in Kanawha County Circuit Court, alleges that 26 year-old Gravely changed her mind before the abortion process began when Women’s Health Center could not provide her with adequate anesthesia. Ignoring her pain and instructions to not begin the abortion procedure, Stephens directed employees to physically restrain Gravely and proceeded with the abortion. …

According to statements provided by a consulting medical expert who examined Gravely’s complaint and medical records, both Stephens and Women’s Health Center were negligent. The expert concluded that Stephens violated standards of care “by failing to account for the fetal skull following Ms. Gravely’s surgical abortion…. [F]etal parts…, if retained, could lead to serious injury or even death.”

After returning home, Gravely continued to experience severe pain and heavy bleeding. When she called Women’s Health Center and said she could not drive and was in too much pain to take public transportation, the center declined to assist her. Gravely called an ambulance and was taken to the emergency room of a hospital.

“Abortionists must be held accountable for such horrors,” said Alliance Defending Freedom Senior Counsel Michael J. Norton, co-counsel and a former U.S. Attorney for the District of Colorado.

Care to read six more “terrifying, infuriating encounters”? Go here. You can also buy Lime 5: Exploited by Choice on Kindle for $2.99 to read a whole host of terrible experiences that women have had with abortion. Find out about the crisis of forced abortions in America, and read how the majority of over 500 women told CNN that they regret their abortions.

These are the stories Cosmo needs to print and America needs to hear. Tell this to Cosmo by filling out this online form.