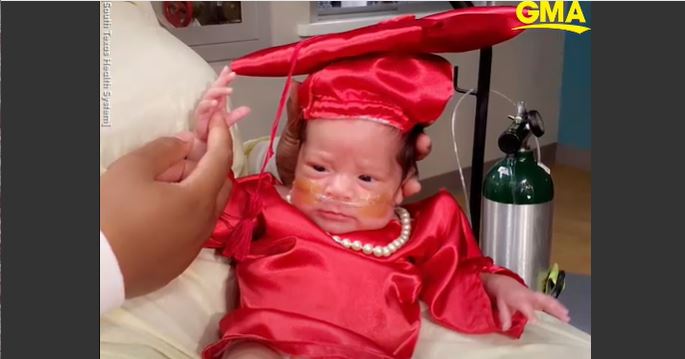 On February 29, 2020—Leap Day—just as the COVID-19 pandemic was getting underway, Alana Patten went into labor at just 26 weeks gestation. Now her premature baby girl has graduated from the Neonatal Intensive Care Unit (NICU), two weeks before her due date.

After premature labor began, Patten had to have an emergency C-section. Baby Gloria weighed just two pounds and was immediately taken placed on a ventilator by doctors, according to Good Morning America. It would be two weeks before her mother was able to hold her.

“She was so tiny I just remember how painstaking of a process it would be just so I could hold her,” Patten to GMA. “We’d have to get the whole team to come over to transfer her from the incubator to my arms.”

"This beautifully triumphant story of life began on Leap Day, when mom Alana Patten went into labor at only 26 weeks….

Gloria spent 12 weeks in the NICU, which were made even more difficult by the pandemic. Patten and her husband Jon were only able to see Gloria one at a time during designated hours of the day due to hospital visitation restrictions put in place to protect everyone—especially the babies—from COVID-19.

“It was all to keep the NICU safe and we understood that, but as brand new parents, it felt like we were a world away from her,” explained Patten, who was discharged three days after giving birth. “My husband held her for the first time when she came home.”

READ: One-pound micro-preemie, adopted as an embryo, is home from the hospital

Despite the complications that prevented the young family from being together, they did what they could to make the best of it and ensure Gloria was well-cared for. They called at the start of every shift to check on how she was doing, and Patten pumped to provide Gloria with breastmilk.

“She provided breast milk all throughout the baby’s stay and she visited almost every day,” said Enedelia Reyna, a registered nurse who cared for Gloria. “And they read to the baby all day, which is very important and was heartwarming to watch, to say the least.”

As her daughter’s health improved, and she gained weight, Patten decided to sew a cap and gown for Gloria to wear in celebration. The nurses and doctors gathered in the hallway to wave goodbye. Gloria now weighs six pounds and is breathing on her own. Doctors sent her home with supplemental oxygen and she will be monitored to ensure she continues to thrive.

Late-term abortion businesses such as Southwestern Women’s Options commit abortions up to 32 weeks gestation on viable, healthy babies of healthy mothers, for any reason. The facility is also willing to commit abortions after 32 weeks “on a case by case basis.”

At just 26 weeks, Gloria was considered extremely premature, yet she had a 90 percent chancing of surviving. Thanks to doctors who worked to save her, she is now at home with her parents after 80 days.

“They loved on her,” said Patten of the medical team. “They knew her. She wasn’t just a baby in bed 13. She was Gloria.”