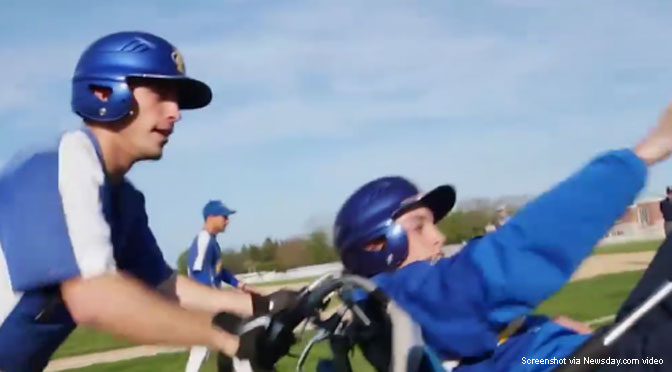 When John and Shelly Tardif’s twin boys were born eleven weeks early in November of 1997, they feared their babies wouldn’t survive. Joe was born weighing just one pound, 13 ounces, and John weighed in at two pounds, 6 ounces. But while Joe would grow without complications, John was soon diagnosed with cerebral palsy. Despite their differences, they help each other live the best lives possible.

Joe recently finished up an accomplished high school sports career, excelling at both baseball and basketball. And right there on the sidelines of every game was his biggest fan, John. John cheers on Joe in this screenshot from a Newsday video.

“When there is a game, he beams from ear to ear and then programs his device to have him say ‘We have a game today!’ to any and all who will listen,” the boys’ mother Shelly told Today.

Shelly Tardif says her boys have a “bond that is indescribable” and that they communicate with each other in their own way.  Joe says that his brother gives him that extra bit of motivation. The brothers play catch in this screenshot from a video by Newsday.

“When I was at bat for the very last time in my high school career, we were losing by four runs and I was starting to get discouraged,” Joe told Today. “But once I heard John cheering, I got my momentum back and ended up getting a single.”

Although it’s always been Joe on the field and John in the stands, during one of the last games of the year, John finally got his chance to take the field after the assistant coach Rich Pisacano walked up to him, put a jersey on him and told him, “You can’t be on the field unless you’re wearing a jersey.”

“John’s face lit up more than I’ve ever seen it before,” Shelly said. Joe pushes John around the bases in this screenshot from a Newsday video.

The twins took the field together, with Joe pushing John’s wheelchair around the bases, making a dream come true for both John and Shelly.

“I always wondered what it would be like if everything went as it should have during birth and how our lives would be different,” said Joe. “I’ll never forget sharing that experience on the field with him that day.” The twins at home in this screenshot from a Newsday video.

The twins even won this year’s Fred Williams Award award given to the player who has overcome the most adversity.  Joe helps care for John, including feeding him and helping him in the bathroom. He says they are “inseparable.” This will make it difficult for both of them when Joe heads off to college next year. Joe helps John eat in this screenshot from a Newsday video.

“John’s always at every one of my sporting events,” Joe told the Suffolk Times. “He’s always there cheering me on. I feel as if it’s my responsibility to give back to him because he’s always giving so much to me. So, whenever I am out there on the field or on the court, I try and give 200 percent, 100 for me and 100 for him. Just give back to what he has given me.”

Watch the Newsday video of Joe and John here.