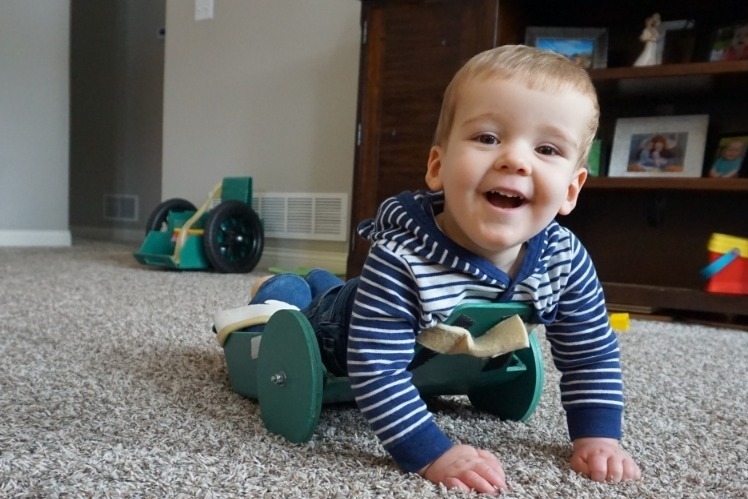 Two-year-old Brody Moreland was born with spina bifida. Within a week of his birth, he underwent two surgeries on his back. Brody also has spinal cord atrophy, which limits the brain signal from reaching below his chest, causing him to be paralyzed from the chest down. He can’t crawl, walk, or sit up on his own. As he grew, he was unable to get around while playing, and his parents knew they needed to find a way to help Brody be more mobile.

“We were devastated,” Brody’s mother Ally Moreland told Good Morning America about his diagnosis. “There was a lot of guilt and questions and worry; ‘What did I do wrong? Why did this happen to my child?'”

“After we knew that, we quit focusing on ‘Why?’ and began focusing on, ‘How do we help him?'” said Brody’s father Taylor Moreland.

In order to help Brody be more active during playtime, his parents gave him a scooter board, but his hands would get stuck underneath it.

“I started thinking, ‘Truly, I can make something better,'” said Taylor Moreland. “Just seeing him try to move, that sparked it. Then it was [a] relentless drive to get him crawling.”

Taylor Moreland worked hard to develop the right product to help his son and in September 2018, he accomplished that goal. The device, known as the “Frog” because, as his mother said, Brody looks like “a little frog” while he scoots around on it, allows him to move around on his belly. He is strapped on and he the Frog tilts up and down to move with him.

“After Brody started using the Frog, his life, I mean, literally changed almost overnight,” his father said in a video. “He was able to chase the cat. He was able to open drawers. He was able to do pretty much anything that any little boy that can crawl can do.”

“Almost overnight after Brody started using his Frog, his cognitive development exploded,” added his mother. “He was able to explore his world around him and play with his cousins on the floor and really just interact with everything in our house like he had never been able to do before. It was life-changing for both him and us.” It was simple things, like getting away from his mother when he didn’t want his diaper changed, that made a difference in their lives.

What’s amazing is Taylor Moreland isn’t an engineer or builder. He runs a business selling seed and crop protection products to farmers. Now, Brody’s family is creating the product for other children with their new company Frog Mobility LLC. At night, Taylor Moreland works at home building Frogs. It is patent pending and already about 20 other kids are using it. There’s also a list of children waiting. 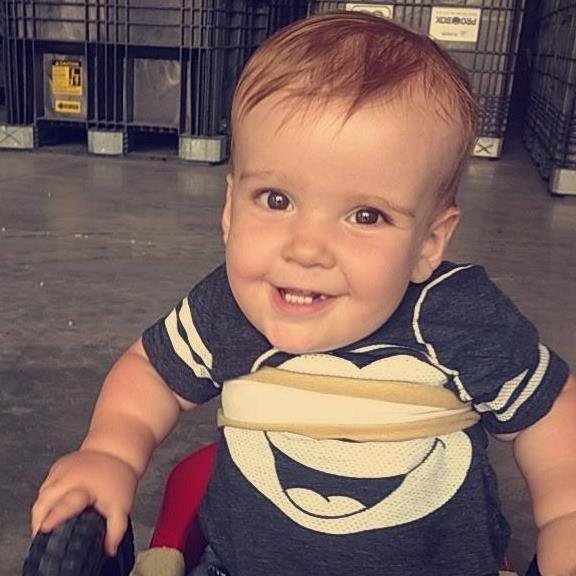 Brody Moreland, who has spina bifida, is now crawling around thanks to his father’s invention. Photo via Facebook.

Two of the children currently using the Frog are a one-year-old boy with Down syndrome, who uses it to help learn how to use his arms for crawling, and a little girl with a feeding tube who was not comfortable being on her belly. With padding added to the Frog, she is able to move around and be on her belly without discomfort or pain.

“Most of the kids who have them now, have found out through our network of physical therapists or our GoFundMe page,” said Taylor Moreland. “I never thought this would be something that would help another kid.”

The Frog costs $300 to make and send to a child who needs it, so for families who can’t afford it, the Morelands use money from their GoFundMe account to cover the cost. They want to help as many children as possible to get moving like Brody has.

“He is a very curious little boy,” said Ally Moreland. “I just love his can-do attitude. In his mind, he’s not different.”