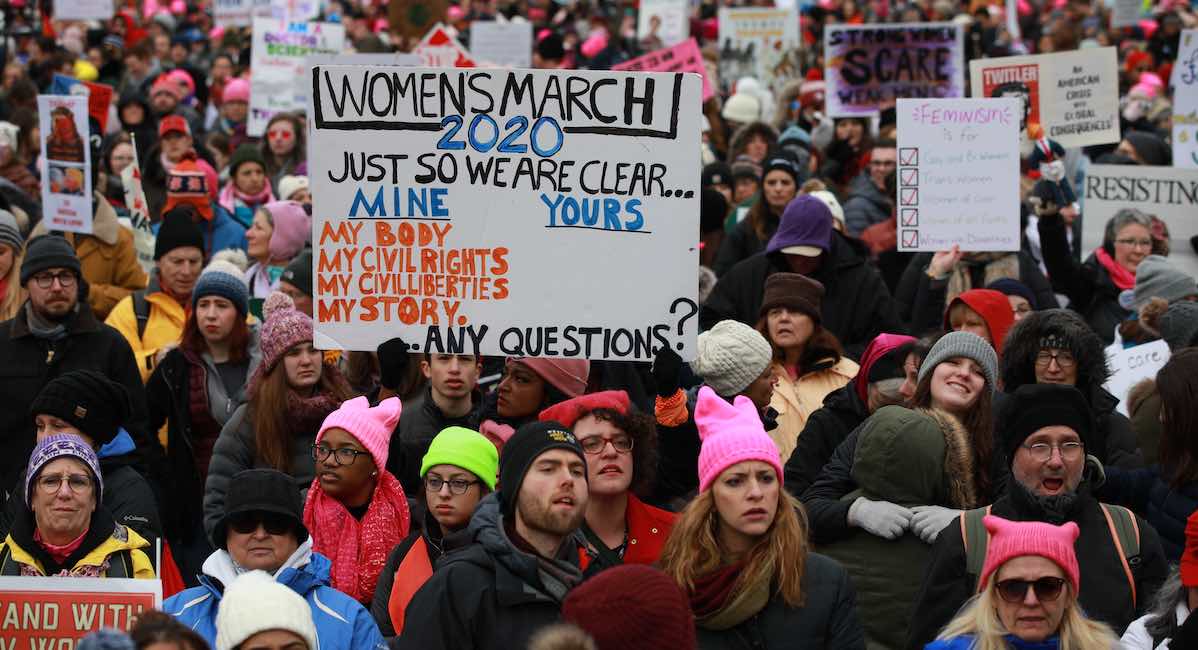 I’m only 19 years old so I’m sometimes still a bit naïve; for example, since I am a woman, I thought I would be welcome at the Women’s March in D.C. this past Saturday. I was wrong. I am also now less naïve.

At the Women’s March, surrounded by people chanting “My Body My Choice,” and “This is Democracy!” a college friend and I stood, holding up our feminist pro-life signs behind the opening banner, believing that in our free democracy all women have the choice to come to their own conclusions and state their minds freely. I was there in solidarity with the other women, while exercising my freedom to state my difference of opinion civilly.

We marched peacefully with the other women, cheerfully holding our “Pro-Woman, Pro-Earth, Pro LGBT Rights, and Pro-Baby (aka Pro-Life)” signs. Not ten minutes passed before a coordinator from the Women’s March planted herself in my path and grabbed my shoulders, shouting “Move! Move!” I heard chanting and drums behind me – a group of indigenous women was moving through the crowd to where I stood in the grip of the coordinator. She followed with more shouting in my face, “Move! Move! Do you see what you are doing?! Don’t you see what you are doing?! You are putting your white body and your sign in front of these indigenous women! Move your white body away from these indigenous women!” All the while, she was forcefully pushing me backwards, attempting to remove me from the front of the March.

I planted my feet, trying to resist her, and stated, “You don’t know who I am or where I come from. Let go of me! I’m not blocking the indigenous women, I am marching with them. This March is for all women.”

I tried to get her to take her hands off of me but she wouldn’t, until we were swept away from the front by the wave of indigenous women. Once she had succeeded in her aim – to forcibly remove me from the March – she let go of me and stormed away.

As I reflect on my encounter, what stands out to me most is the outrageous irony of the Women’s March coordinator’s words and actions, in juxtaposition with the claims and demands of the March. I was prepared to encounter verbal pushback about my sign – it happened last year and did again this year. But I was not prepared to be “woman-handled” by someone claiming women have a right to “bodily autonomy.”

Her attitude and actions reveal the hypocrisy of the Women’s March organization and the current state of progressive feminism in a few ways.

All around me, marchers were screaming, “Keep your hands off my body!” Each of them making it clear that no one can tell women what to do with their bodies, even when that means taking the life of another body. And yet, here was this progressive feminist March organizer putting her hands on my body and trying to force me, against my will, to do what she wanted. Apparently bodily autonomy is only for people who share her opinions. My bodily autonomy did not matter.

Secondly, many marchers toted signs saying, “No Uterus, No Opinion.” As a biological woman with a uterus, following this premise, my opinion should count. Right? Wrong.

3. If you’re a pro-life woman, standing in solidarity may be difficult.

Finally, I was marching because I sought to stand in solidarity with my fellow women, regardless of their background. The same was not true of the March coordinator who physically accosted me. When she screamed at me to move my “white body,” assuming incorrectly that I was intentionally blocking the indigenous women, she made assumptions about me because of my skin color, and tried – by force – to shut me down.

I could play the identity card here and I would “win” against my aggressor, but I refuse to play that game.

In the end, I am glad for the experience, though at first, I felt angry at the March coordinator and let down by the bitter, crass and self-righteous expressions of my fellow feminists. Now I just wonder why my presence triggered her hatred. How many abortions might she have had? What pain and regret might she be suppressing? I wish I would have had the presence of mind to ask her.

Whatever the answer, I know what my plan is. The Women’s March has been dwindling since 2017; maybe it has to do with its lack of diversity, equality and inclusivity for all women. I have some encouraging news for the coordinators — next year I will be back, and in numbers — marching for ALL women, those still in the womb.