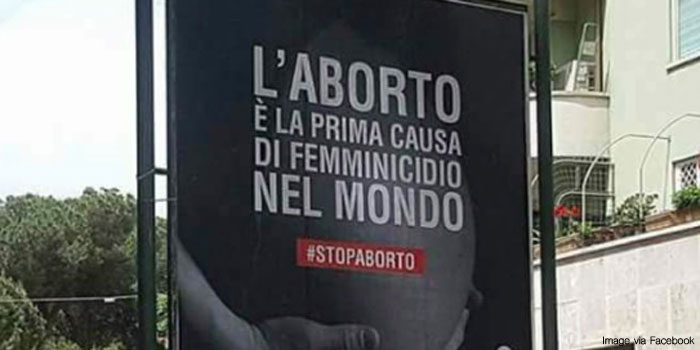 In Italy, so-called feminists and abortion supporters are incensed by a new pro-life ad campaign that drives home the fact that abortion is the leading cause of death for females in the world today. “Abortion is the prime cause of femicide in the world. #STOPABORTION,” declare the posters, displayed in Rome, which feature the black and white image of a pregnant woman cradling her womb.

Naturally, in a society that elevates abortion to the status of “women’s empowerment,” this sort of messaging is unwelcome. Several have called the posters “offensive” and are calling for their removal because they use the term “femicide,” a term the BBC News says is “often used for the killing of women by men.”

This isn’t the first time a pro-life poster campaign has been met with ire in Rome. According to BBC News, “Only a month ago Rome authorities removed a giant poster of a foetus that bore the slogan: ‘You’re here because your mum didn’t abort you.'” The BBC adds that the “Madrid-based CitizenGo group behind the posters timed the campaign to coincide” with the upcoming “anniversary of Italy’s Law 194” on May 22, which was the law legalizing abortion for any reason up to 12 weeks of pregnancy. After this point, abortion is allowed only to save the life of the mother or in cases in which there is a fetal abnormality. The group plans to post its ads in other cities as well, and there is a march for life in Rome coming up this weekend.

In a series of messages on social media, [the pro-life group behind the posters] said that after 40 years the law had failed and that abortion was often used to suppress women, leaving “millions of babies killed and women injured”….

Among those protesting against the new campaign was local authority leader Francesca Del Bello, who said the posters were “offensive to every woman, especially for those who had the difficult experience of abortion or violence”.

Writer and broadcaster Selvaggia Lucarelli went on Twitter to say: “How sad to use the term ‘femicide’ in a vile way with the clear aim of attracting attention to a campaign against abortion.”

But the ad campaign is accurate, even if it uses a controversial term. Around the world, more females are aborted than males. Sex-selective abortion of baby girls is far too common. Live Action documented the willingness of the abortion industry to abort baby girls simply for being girls, noting, “Nobel Prize-winning economist Amartya Sen estimated that as early as 1990, approximately 100 million women were missing worldwide due to sex-selective abortion, female infanticide, and other such barbaric practices. Current estimates now put that number at as many as 200 million missing women and girls globally.” This isn’t just happening in China and India, but in the U.S.:

The BBC also notes that while the pro-life ad campaign in Italy is garnering angry responses from some, Italy is predominantly a Catholic country, and many doctors there refuse to commit abortions. Abortions in Italy are currently on the decline.