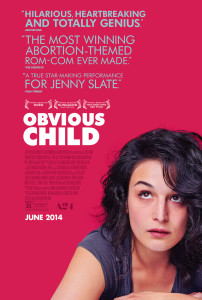 So who’s up for an “abortion comedy”?

The just-released Obvious Child, about a woman seeking an abortion after a one-night stand, bills the protagonist’s mission to have a nice Planned Parenthood kill her child for her as a “journey of self-discovery and empowerment.” In other words, it’s the usual propaganda hiding murder behind self-congratulatory euphemisms, only this time packaged in a medium where every facet of reality can be shaped to fit the narrative.

With that in mind, let’s see what Obvious Child’s fans found most striking about the movie:

Huh. Over twenty different writers just happened to think the movie’s “honesty” was a particular highlight. Imagine that.

Granted, you’d expect a cause’s ideologues to have similar general sentiments about something that tells them what they want to hear. But when the same word pops up again and again, often accompanied by similar adjectives for emphasis, it’s hard not to get suspicious. And then you see that NARAL and Planned Parenthood are hosting screenings of Obvious Child, and read this proclamation from PP president Cecile Richards:

Honest portrayals about abortion in film and television are extremely rare, and that’s part of a much bigger lack of honest depictions of women’s lives, health, and sexuality. This film is a major breakthrough—not just because it shows a woman deciding to have an abortion but because it shows her as a full and complete person making the serious decision to end a pregnancy and still having a full and fun life.

Whether the honesty mantra came from some coordinated talking points (not that PP would ever do something like that) or simply from marinating too long in the abortion movement’s hive mind, it seems an awful lot like the message to be celebrated was determined independently of the mere formality of actually watching the movie.

Then again, to be fair we must consider the alternative, that the movie really is that darn honest. So is it? Again, let’s check the words of its own fans.

Andrew O’Hehir at Salon says outright that “abortion is not presented as a major moral dilemma,” and while Elizabeth Plank at PolicyMic purports to run down the “8 Biggest Lies About Abortion, Debunked by” the movie, it’s telling that “abortion kills” isn’t among them. The Huffington Post’s Emma Gray quotes the director as saying, “We didn’t put that [judgey] character in there because we’ve seen that character, and that’s not a character I wanted to put in a movie.”

Indeed, even those above who laud its revolutionary candor all-but admit such accolades are baseless. James says it “has no hand-wringing about ethics,” and Hess says it “never dwells on Donna’s decision.” Good to know you can produce a new gold standard for truth on a controversial subject without so much as presenting, let alone addressing, the entire reason it’s controversial in the first place.

The key to understanding the disconnect lies in another recurring thread in these reviews. To them, Obvious Child counters a perceived excess of characters choosing life; Knocked Up is a repeat target because its protagonists found abortion unthinkable—per Michelle Goldberg, it “asked us to believe that the ambitious professional played by Katherine Heigl never so much as pondered ending a pregnancy resulting from a drunken one-night-stand with a schlubby loser.”

They love the movie not for actually exploring the reality of abortion, but for giving them the reality they’d prefer. It paints a comforting illusion that Donna’s experience is all there is to abortion—no ethics to bother with, no son or daughter to consider, no violence to confront. Just one of those things you do when an evening takes a wrong turn. Perhaps by laying the “honesty” talk on so thick, they’re above all trying to convince themselves.

Alas, their fantasy world can never be, because you can’t simply write out abortion’s most interested party. To most of us, the baby’s presence is, well, obvious.

That may be the most remarkable thing about Obvious Child: not the innate repulsiveness that such a thing as an “abortion comedy” exists, but that the filmmakers chose a title that couldn’t be more self-defeating than if it pro-lifers named it ourselves. They may have meant it to reference a Paul Simon song and their main character not being ready for parenthood, but all they really did was saddle their movie with a two-word summary of its own fundamental dishonesty.