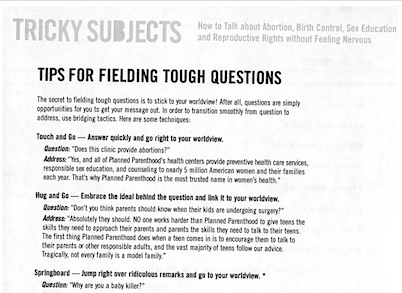 Not proper discussion, but manipulation.

Early on Thursday, July 12, Students for Life of America posted that leaked documents from Planned Parenthood had been acquired. A regional coordinator affiliated with Students for Life has also said that the person who acquired the documents is working on getting more.

The documents can be found here with their three different pages, each page with a different section.

To start off, “TRICKY SUBJECTS: How to Talk About Abortion, Birth Control, Sex Education, and Reproductive Rights without Feeling Nervous” has some “KEY MESSAGES” with a few bullet points on “Birth Control,” “Emergency Contraception (EC),” and “Sex Education.”

The second page is “SOURCE: Reproductive Health Technologies Projects” with bullet-point tips on what to say and what words to use when talking about such topics as mentioned above. There are also some “Sample Statements.” However, with the strong disagreement pro-lifers have with Planned Parenthood, it is doubtful that someone who knows the true nature of what Planned Parenthood does can be talked into forgetting that this organization advocates for and does abortion in the pursuit of finding something else to agree on. It is also doubtful, then, if using these points can realistically encourage discussion when there is already such disagreement.

The first listed point is:

Pro-lifers already do show empathy and understanding for a woman facing an unintended pregnancy, but that’s about where agreeing with Planned Parenthood tends to end. When a woman goes to get an abortion of her own free will, it is she making that decision. Pro-lifers do not think a woman should be able to make the decision to take away the life of her own child, though.  There is disagreement with her decision because once a child is conceived, it should be nobody’s decision to end that life.

Here is another listed point:

Encourage tolerance for different views on abortion. We do not need people to feel comfortable with abortion, nor do we need them to believe it’s good–we do want the [sic] to refrain from concluding that their personal feelings about abortion should be translated into making abortion illegal for all women.

It doesn’t seem likely that dialogue would go very far when Planned Parenthood representatives “want” pro-lifers to “refrain from” having or coming to this fundamental belief. Because pro-lifers know and understand the truth about abortion, a pro-lifer should absolutely want to make abortion illegal to protect all innocent unborn children. Regardless of anyone’s feelings about abortion, the act of abortion still takes a life. If a pro-lifer is so fundamentally against the direct killing of an innocent child in the womb, how could he or she be able to stand for abortion being legal, then?

Bring the discussion around to shared goals. “We all want” … happy, healthy children and families, or for each child to be born to parents who feel ready for a responsibility.

Pro-lifers believe that every child has the right to be born, regardless of whether or not his or her parents want a child now. If the parents don’t, adoption is certainly an option. When Planned Parenthood advocates for abortion, the organization advocates against the rights of the unborn. Planned Parenthood believes that abortion should be an option; pro-lifers do not. It seems unlikely that someone talking on behalf of this pro-abortion organization would see that “shared goals” amount to much when there are so many differences.

This one is slightly confusing:

The operative verb should be decision, not choice. The word “choice” carries a connotation of triviality, since one makes so many routine choices in the course of a day. “Decision” more accurately conveys the gravity of the woman’s thinking as she ponders whether to end her pregnancy.

Okay, nice try, Planned Parenthood. This talking point completely neglects to talk about how some women regret abortion, or suffer in other ways. Instead, there’s a discussion that’s been created on how saying “choice” is too trivial when it comes to talking about women. What truly has a negative connotation is telling a woman that she needs to kill her own child in order for her to do whatever else she wants to in life. There are a few more negative connotations, and they’re not associated with word choice. They’re about distracting and manipulating people by changing the subject and about using this talking point to refrain from talking about what abortion really is.

Here’s one that’s a bit sad:

It is admittedly slightly amazing that Planned Parenthood acknowledges in one of the talking points that many Americans do not want to have an abortion. Why not, though? It’s because abortion stops a beating heart and because it causes pain and regret for the woman. Also, an abortion is a big enough decision with a permanent consequence that it should be the core of the decision. If you do not wish to be a parent, you don’t have to, and can give your baby up for adoption.

And the last talking point:

Use words like “pregnancy” or “baby” when talking about abortion if they seem appropriate. Technologies like sonograms have made pregnancy more accessible to the general public, notably men and younger women who may not have experienced pregnancy. The growing prevalence of genetic tests also makes more listeners familiar with the situation of a wanted pregnancy that has gone awry.

Huh? What do you mean, “if they seem appropriate”? An abortion is the termination of a pregnancy, which means that it takes the life away of the human  baby inside! It would be shocking if a representative from Planned Parenthood was talking to someone who did not know that these words would be relevant and appropriate. Also, it’s not clear what “a wanted pregnancy … gone awry” has to do with making words like “pregnancy” or “baby” more appropriate to use, but such a reason is not a good enough reason to terminate a pregnancy.

The third and last page brings us to “TIPS FOR FIELDING TOUGH QUESTIONS.”

Here’s how this section starts off, which kind of has a cheerful tone to it actually:

The secret to fielding tough questions is to stick to your worldview! After all, questions are simply opportunities for you to get your message out. In order to transition smoothly from question to address, use birding tactics. Here are some techniques[.]

After reading some of the worldviews, it becomes clear that Planned Parenthood doesn’t really care what you have to say unless someone can be convinced that yes, he or she does agree with Planned Parenthood! After all, the “secret,” and the likely goal, “is to stick to your worldview!”

And here’s what the last tip suggests:

Wow. That certainly isn’t good advice. But then again, it may be if it just goes back to “stick to your worldview!”

Here is the point that shows me that Planned Parenthood doesn’t really care about what someone who disagrees has to say:

Springboard – Jump right over ridiculous remarks and go to your worldview.

Question: “Why are you a baby killer?”

So if a pro-lifer asked a representative from Planned Parenthood this question, which may involve not the best-advised phrasing but is an actual question, he has made “ridiculous remarks” and gets an irrelevant answer. Oh wait, sorry, the representative’s “worldview.” Nothing in this answer involves the “baby killer” of abortion. Remember, the person who asked the question is the one with the “ridiculous remarks” and the Planned Parenthood representative is just to “springboard” over him.

Planned Parenthood shows that the organization don’t really care about having a dialogue with pro-lifers, but rather, it’s paramount for the Planned Parenthood representative “to get [the] message across!” And that is not proper discussion – that is manipulation.