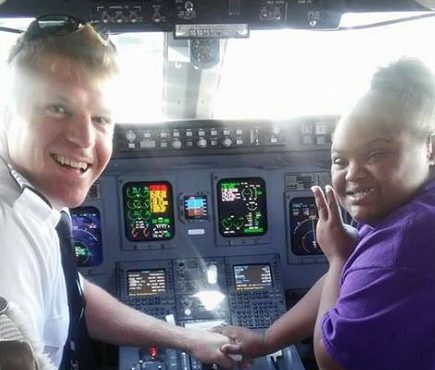 Deanna Miller-Berry says that her daughter was born to defeat the odds. Born with Down syndrome, 17-year-old Shantell “Shannie” Pooser has fought various health challenges throughout her life, but she hasn’t let that slow her down or stop her from chasing her dreams. In fact, she has a bucket list — and one of the things on it is a dream that’s now being fulfilled in a unique way: her dream of being a flight attendant.

Pooser was born with a heart defect and airway problems, and frequently has to travel from her hometown of Denmark, South Carolina, to see specialists at Cincinnati Children’s Hospital in Ohio. In 2016, Pooser showed that she was able to defy the odds once again, as she underwent a life-saving surgery that doctors said would leave her in bad shape.

“She came out singing ‘Let It Go’ from Frozen,” Miller-Berry said in an interview with CBS News. “The surgeons were standing around like, ‘We’ve never had anybody come out of this type of surgery talking … this girl is singing ‘Let It Go’ in ICU.'” It was then that Miller-Berry decided to take her daughter’s dreams and help make them come true, saying she made a vow to God to help her daughter. “I said, ‘Shannie, no matter what you want to do when you get better, we’ll make a bucket list and I’ll make it happen. If you live long enough where the doctors can fix you 100 percent, I’ll do my best to make your dreams come true,'” Miller-Berry recounted.

On Pooser’s bucket list? Meet Barack and Michelle Obama, dance on Ellen DeGeneres’ talk show, go to her junior prom in a hot air balloon, and become a flight attendant.


READ: ‘Beautiful in our own way’: Gymnast with Down syndrome gets modeling deal

Because of her airway issues, Pooser can’t fly on long flights on a regular basis. But she does still have to travel to Ohio frequently. “We became friends with a lot of the flight attendants and a lot of pilots, and she just kept saying, ‘Mommy, I want to be a flight attendant,'” Miller-Berry explained. So she reached out to a friend of hers that was a flight attendant, and American Airlines surpassed what the family could have ever expected.

First, Miller-Berry got a call from a pilot who said they were going to throw Pooser a birthday party on a Boeing jet, with the first class section filled with Pooser’s friends, family, and even local celebrities. American Airlines then sent her an official flight attendant uniform and badge, so she can dress the part every time she flies — and the other flight attendants have made her a part of the staff, too.

Pooser helps the flight attendants before every flight, and then rests while other passengers board. She then helps demonstrate safety instructions to passengers, and has worked four times since her birthday. Pooser is scheduled to have emergency surgery next week, and Miller-Berry is hoping to not only fulfill her daughter’s bucket list, but also see her employed as an official flight attendant for American Airlines after she turns 18. Miller-Berry is also hard at work at the non-profit organization she founded in her daughter’s honor, the Saving Shannie Foundation.

Together, this mother-daughter duo is showing that disability doesn’t hold anyone back, and there’s no barrier they can’t break together.