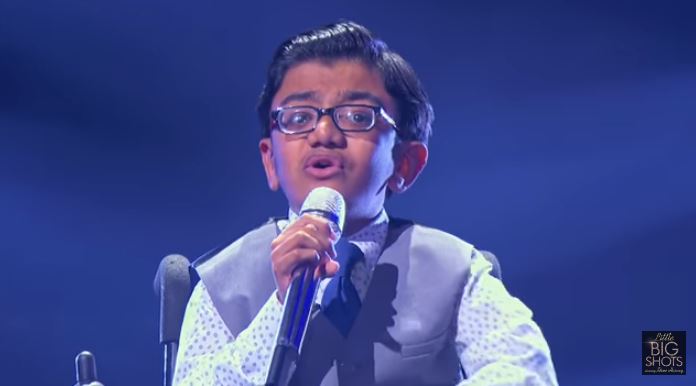 A 13-year-old boy from New Jersey took the Little Big Shots stage by storm on March 26, 2017. Sparsh Shah is a singer and rapper who writes his own songs. He has a video on YouTube that has been viewed millions of times. But what makes him even more unique than the average kid, is that Sparsh has osteogenesis imperfecta, the genetic condition more commonly known as brittle bone disease.

From the moment he rolled out on stage in his wheelchair, Sparsh lit up the theater. He was polite. He was funny. And he was genuinely happy.

“You always have to feel good,” he told host Steve Harvey. “I mean, why waste your life in sadness when you can enjoy a life of happiness?”

Sparsh has had 125 fractures in his life because his bones are incredibly weak. But he doesn’t let that stop him from living his life. In fact, he told Harvey that he currently had a fracture while on stage. Harvey wondered why he would want to come on the show with such an injury.

“I want to inspire the world,” explained Sparsh. “I can’t just sit there and mourn at my fractures and my disability and be like, ‘Oh, man. See those dudes? They’re doing so good.’ I was never like that.”

Sparsh, whose stage name is Purhythm because he never uses profanity in his music, wants to perform in front of at least a billion people. He said he’s been singing since he could talk and his parents helped him improve.

After a rap battle with Harvey, Sparsh performed a song with a beautiful voice that showed he has a clear talent. The crowd adored him and his parents, who were in the audience, were obviously full of pride.

“I can see from the trends in abortion on grounds of disability that the writing is on the wall for people like me,” he told parliament. “People with congenital disabilities are facing extinction. If we were animals, perhaps we might qualify for protection as an endangered species. But we are only human beings with disabilities, so we don’t qualify.”

While late-term abortion is a cruel and barbaric practice (as shown in the video below), many people, some who even call themselves pro-life, are in favor of abortion right up until birth if the child is diagnosed with a condition or disability prenatally. People like Shinkwin and Sparsh are at risk of being killed every day simply for being different.

Chelsea and Curtis Lush were advised by doctors to abort their daughter Zoe when it was discovered that she had brittle bone disease when she was still in the womb. They were told that Zoe may not survive until her birth and that they should abort and donate their baby girl’s body to science. The couple refused. Though Zoe had a rough start to life, dealing with broken bones when she was inside the womb and during her birth, now that she is six years old, things are getting easier.

“I would not change Zoe,” said Chelsea Lush. “If I could take her OI [osteogenesis imperfecta] back I would never ever take it back. In the future, I hope that Zoe has just as well as an opportunity as everybody else.”

Described as “always smiling” Zoe has much to offer and proves that life is always worth living. Sparsh, with his talent and joy for life, is a testament to this as well. When we abort children because we feel their lives will be too different or too difficult, what we do is not only discriminate against them, but we kill all the possibilities that exist for what they can give to the world and all that they can and will accomplish.

These two children, with smiles on their faces, and their parents, with hearts full of pride, show us that no matter how scary it can be at first to learn of a child’s diagnosis, acceptance and love are always the answer. Fear and abortion are not.