Rocklin Unified School District (RUSD) recently made headlines when a teacher came under scrutiny after the national school violence walkout made headlines, and a history teacher asked her class what might happen if students walked out for an issue like abortion. That question, meant to spark critical thinking, netted her complaints that got her removed from her post temporarily at Rocklin High School — but behind the scenes at RUSD lies a sex education curriculum with ties to the abortion industry itself, which may help explain the mindset behind the backlash.

RUSD recently updated its sex education policies as part of “catching up with the times,” according to a story in January, coming into line with the implementation of the 2016 California Healthy Youth Act, which has some controversial requirements as far as conservative and pro-life parents might be concerned.

RUSD has two high schools, Rocklin High School (RHS) where the abortion walkout controversy took place, and Whitney High School (WHS). RHS’s webpage is not up-to-date, but WHS’s clearly displays what sort of sex education students in RUSD will be offered to its students:

One of the resources used for this curriculum is from F.L.A.S.H., a Planned Parenthood-associated and affiliated curriculum.

However, the FLASH curriculum, while seemingly having some solid instruction in parts, is published by ETR Associates, which, as Live Action News has previously reported, is the home of Planned Parenthood’s sex education curriculum packages, all under different names but espousing the same principles:

ETR Associates actually began as the educational arm of Planned Parenthood in Santa Cruz, according to American Life League. Today ETR is the clearinghouse for masses of health curriculum, including virtually all the controversial sex education curriculum that is connected to Planned Parenthood and slowly creeping into school districts across the nation unawares—at least until parents find out.

FLASH is co-authored by Kari Kesler, who, as Live Action News reported, is “closely aligned with reproductive education, which usually is a euphemism for ‘abortion advocate,’ and based on Kesler’s interest list on the networking page, she’s got an affinity for NARAL Pro-Choice America.”

Common resources in FLASH include sending students to Planned Parenthood for answers, which is something that RUSD does in itself, with or without its FLASH lessons. In Section III of RUSD’s sex education information, parents may find disturbing topics happening after English and history classes are over. This section, entitled “Controversial Issues,” addresses topics that include abortion and masturbation. The abortion lesson, it instructs, is to be taught “during or after Section I, B: Embryonic and Fetal Development.” As WHS does with each lesson, it lists resources for classroom instruction. Here are a few of the resources for teaching about abortion:

The abstract of the Crates piece says:

The increasing availability and utilization of legal abortion in the United States has several important effects on public health in the 1970’s. It reduced deaths and surgical complications among women of childbearing age; it made possible the development of safer surgical procedures for pregnancy termination; and it increased the provision of low-cost outpatient gynecologic services. There is some concern about potential adverse outcomes in future desired pregnancies and possibly higher risks of breast cancer in certain women

Induced Termination of Pregnancy Before and After Roe v. Wade. Council on Scientific Affairs and American Medical Association.

The abstract for this source reveals its pro-abortion slant:

Deaths from legal abortion declined fivefold between 1973 and 1985 (from 3.3 deaths to 0.4 death per 100,000 procedures), reflecting increased physician education and skills, improvements in medical technology, and, notably, the earlier termination of pregnancy.

WHS seems to think that the nation’s largest provider of abortions, the corporation that is sustained by the death of preborn babies, is an appropriate resource to help provide this allegedly “unbiased” classroom instruction. It’s not clear what these “facts” may be, but one thing that is clear is that if Planned Parenthood provides it, it promotes abortion. 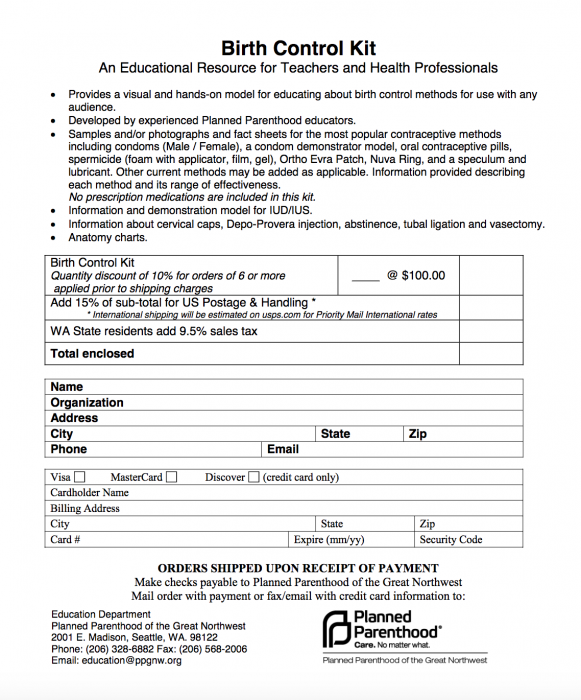 Thus, students at WHS will leave class not only with instruction from the abortion corporation, but may even pocket some sample supplies, such as condoms. Some Planned Parenthood sex education and birth control tools include “flavored condoms,” which is not what most parents would be expecting their child to learn about at school, whether or not a sample was handed to them. A “condom demonstrator model” is also included with this kit. While it’s not directly clear here, it is likely one like this, which Planned Parenthood sells for sex educators. A side note on these kits provided by the abortion corporation. Whether or not this applies to WHS’s materials, Planned Parenthood lists this disclaimer on its sales page:

The items included in this kit are to be used for educational purposes ONLY. Some items may be expired, or their effectiveness otherwise compromised.

It’s quite possible that that disclaimer is neither read nor emphasized in the classroom where students receive these materials. The fact that Planned Parenthood even provides ineffective birth control and announces it does so should be a red flag for schools when adopting anything from the abortion giant. Ineffective birth control certainly could foster a larger abortion clientele.
READ: U.S. and U.K. studies: Sex education, birth control access don’t reduce teen pregnancy
What parents do or don’t know about what’s being promoted in RUSD’s classroom isn’t clear. The website includes the parent permission form:

However, this parent information form, as with forms from many other school districts, it is opt-out rather than opt-in.

In an age when parent involvement is lower, it’s not unheard of for parents to not even receive documents, let alone read them, sign them, and be sure they are returned to the school. Students may push parents to sign the form to buy a yearbook or file for graduation, but it’s unlikely the average student is going to pressure mom and dad to get out of a sex ed class. And in Rocklin, California, where a teacher can get temporarily suspended for simply speculating what would happen if students wanted to walk out to protest abortion, students will actually be taught about abortion as a viable option.