Every time Americans turn a page in a newspaper these days, it seems a headline screams “Planned Parenthood is coming to your school.” That was the case in Grandview, Washington, where Planned Parenthood’s “Get Real!” curriculum was being considered for adoption at Grandview Middle School last month—until parents shouted such a loud “no” that the school board honored their wishes and rejected it. But the school didn’t actually kick Planned Parenthood out of its schools, unbeknownst to parents.

Adding to the curriculum controversy in the Grandview district was some extra information that left people questioning the district’s motives—as well as the abortion corporation’s strategies in future districts. It seems that Planned Parenthood had made a $25,000 donation to the Grandview School District, and that left parents wondering if that was why the district moved to adopt the Get Real! curriculum in the first place. But it turns out that the district sex education curriculum is already in bed with Planned Parenthood, so deciding against Get Real! wasn’t as much of an event as it was portrayed to be. Parents were happy, however, that the board rejected Get Real! this time around.

…[M]ost parents were happy about the new change, they still questioned whether the Get Real curriculum would be brought up in the future.

They also questioned the board on whether they had taken money from Planned Parenthood, and if that was the reason why the Get Real curriculum was considered in the first place.

Grandview Superintendent Henry Strom said they had indeed received $25,000 from Planned Parenthood which is going to help get better technology for health classes, but he says that does not mean they have to use Planned Parenthood’s curriculum for sex education.

“There is not a requirement that you utilize Planned Parenthood’s curriculum when you accept that money,” said Strom.

But parents want to know why the curriculum ever came up if the “gift” from the abortion corporation wasn’t an incentive. At the meeting where the board tabled the sex ed curriculum, arguments grew heated, as the Daily Sun reported:

As the disgruntled school patrons waited for their turns to speak, Burgeson said “It’s tabled, finished.”

Before he could start asking for public comment, parents began calling out questions voicing objections to the middle school sex education course to the way in which parents received limited notification of its discussion.

Some the parents complained they hadn’t heard about the board’s pending decision until just before the meeting.

The district’s own policy on parental notification mandates parents be notified in writing prior to any curriculum being taught, and that a review of curriculum materials will be made available to parents.

While the curriculum had not yet been adopted, which would have required this policy be used, parents still felt like the curriculum was shrouded from their view, as the Daily Sun notes:

Many of us only recently found out about this (proposal) via social media,” [parent]Alicia Fajardo said.

Others voiced strong objections to the use of Planned Parenthood materials in the school, fearing children would be learning about abortion as an acceptable way to handle unplanned pregnancies.

“I’m sure many parents found out (about this meeting) by social media,” said Teresa Amador, a parent of three girls. She thanked the board for not accepting the curriculum.

“We need to let kids be kids. I fear that changing to this curriculum would be a direct line from sex to abortion,” she said.

But have they truly rejected such a curriculum? On February 22, a letter informed the middle school parents of the decision to continue using its existing curriculum: 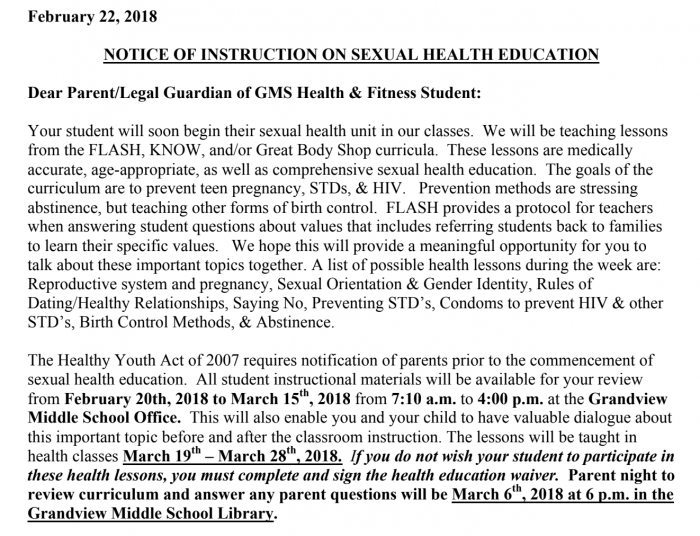 What parents may not know about the FLASH curriculum and the KNOW curriculum has a similar agenda to Planned Parenthood’s. Grandview Middle School does indeed use and promote the FLASH and KNOW curriculum, but what it doesn’t reveal is that the curriculum comes from ETR, and ETR is the same publisher that produces the tabled “Get Real!” curriculum. This shouldn’t be a surprise, since ETR Associates actually began as the educational arm of Planned Parenthood in Santa Cruz, according to American Life League. Today ETR is the clearinghouse for masses of health curriculum, including virtually all the controversial sex education curriculum that is connected to Planned Parenthood and slowly creeping into school districts across the nation unawares—at least until parents find out.

However, for parents to find out what’s in the FLASH and KNOW curriculum, as the letters says, they must do the legwork of going to the district, reviewing it, then filling out a form to opt out. Any parents who doesn’t fill out this form will find their children opted in by default.

As the Daily Sun reported from the parent meeting, some parents believe that the community has a strong moral foundation and this should be reflected in the schools. “Others rejected the program,” they wrote, “saying it went against the moral code of the community, which was based on abstinence.”

A caption on a photo included in the article read:

Janet White of Grandview was one of more than 12 patrons who opposed the Grandview School Board proposed adoption of a Planned Parenthood-based sex education course. “We have a higher moral compass in our community,” she said.

Abstinence will not be taught to the exclusion of other instruction on contraceptives and disease prevention. The district’s sexual health education program shall be consistent with the 2005 Guidelines for Sexual Health Information and Disease Prevention developed by the Department of Health and the Office of Superintendent of Public Instruction.

That sounds stable and grounded, until you take a look at those guidelines, which seem to run back into an infinite loop that starts and ends at Planned Parenthood, as the guidelines quote one of the key people behind ETR:

What’s in these resources that Grandview and many Washington state schools use are lessons many parents may not find appropriate for their sixth through eighth graders.

Andrea Gerber, MSEd, and Kari Kesler, MA, are the lead authors of the FLASH curriculum [they are also listed as authors of KNOW], a widely used sexual health education curriculum. Ms. Gerber has extensive knowledge of curriculum development, project management, and pregnancy and STD prevention. She has overseen material development projects and has led countless teacher trainings on sexual health education. Ms. Kesler has been a Family Planning Health Educator with Public Health–Seattle & King County for over 10 years.

Indeed, as Kesler’s Linked In profile reveals, she’s closely aligned with reproductive education, which usually is a euphemism for “abortion advocate,” and based on Kesler’s interest list on the networking page, she’s got an affinity for NARAL Pro-Choice America: 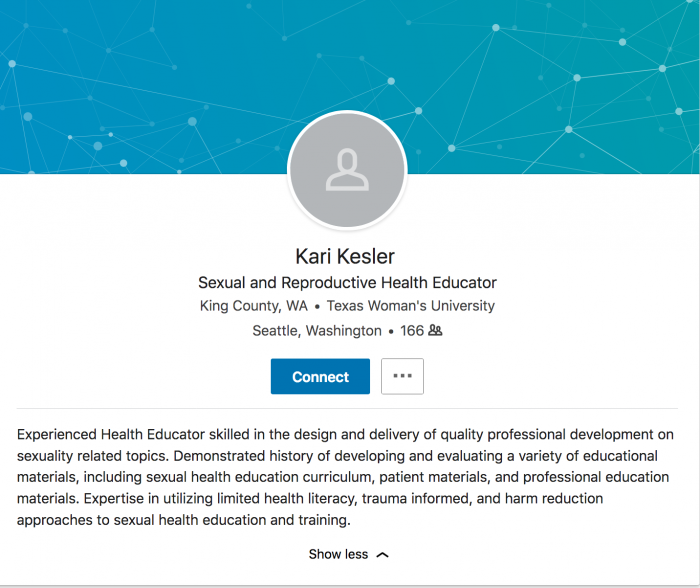 Other curriculum connections may be a concern to some parents of sixth through eighth graders, as well. KNOW Curriculum Advisory members and HIV educators include:

The affiliations of some of the authors and advisers, then, make the content in the training manual for the KNOW HIV/STD Prevention Curriculum unsurprising, such as these examples of teacher “scripts” when students ask questions. 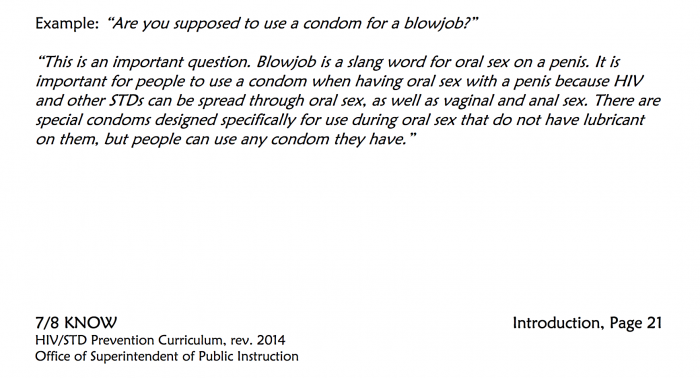 Meanwhile, the FLASH sex education curriculum manual for 4, 5, and 6th graders. Grandview Middle School begins in sixth grade, but as it posted this link to its own site, the Grandview School District said, “Below is a link to the 4th & 5th grade lesson plans that are sometimes used at the middle school.” That almost sounds innocuous, like they are teaching the middle schoolers elementary sex education curriculum, so clearly they would have no reason to be concerned–at least until they review it. First, FLASH includes such resources as Planned Parenthood in its “reliable” resource section. 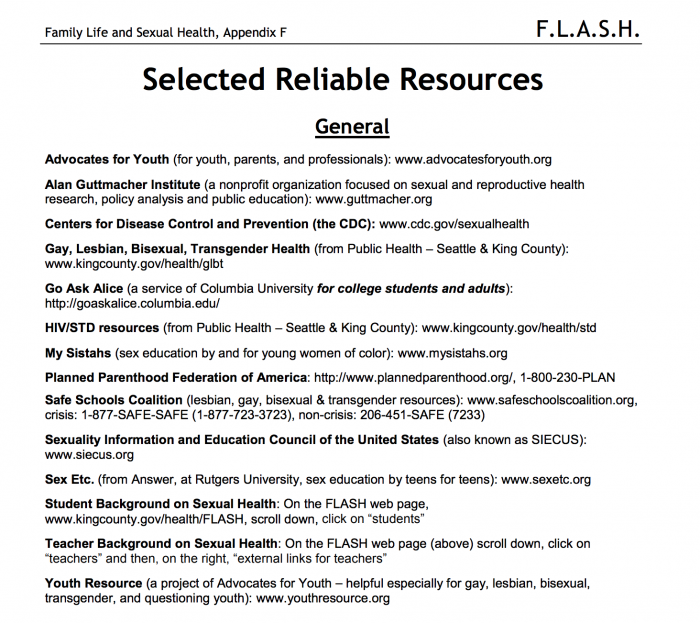 But what about the in-class lessons from the FLASH curriculum for those 9-12 year olds, the general age of fourth through sixth graders? Take this lesson on the reproductive system. This is content for students as young as nine and is approved for use by the Superintendent of Public Instruction in Washington state. 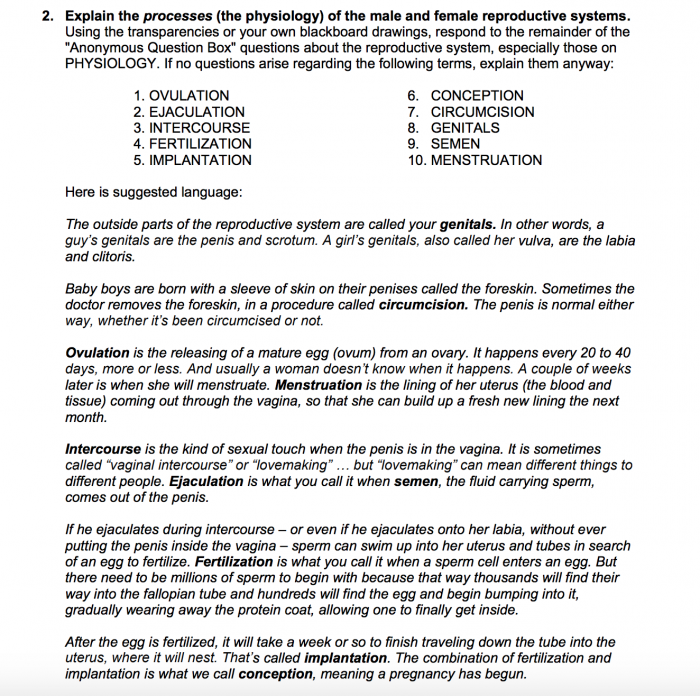 Thus, the irony of the parent protest and potential adoption of the Get Real! curriculum from Planned Parenthood is that even though the board rejected the curriculum and still got to keep its $25,000, the connections with Planned Parenthood are in the classroom anyway, and they have been for a while. As the Daily Sun reported on the protest meeting last month, it relayed the parent objections — some of which portrayed the $25,000 as “blood money,” a “bribe,” etc.

But the superintendent, Henry Strom, the paper reports, told the people that the “money was not connected to the curriculum. ‘It was never a requirement in our decision to adopt this curriculum.'”

What Superintendent Strom neglected to mention was that curriculum connected with Planned Parenthood’s own publishers — the very same ones who publish the protested Get Real! — has been in the classroom already, and the solution to the protest was to reject one — but keep the other. Is it possible that Planned Parenthood could safely give the Grandview School District $25,000 with no strings attached because it already had the district wrapped around its finger?