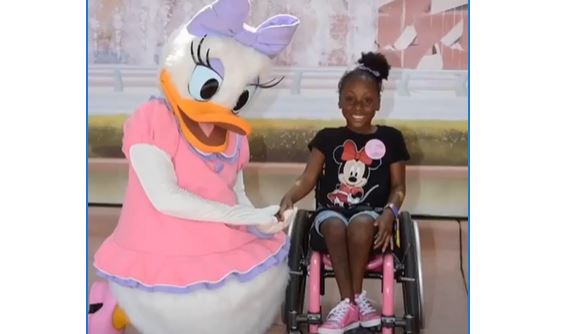 Nickell Thomas and her husband had a young son at home when they learned they were expecting baby number two. Thomas went to her 17-week checkup alone, hoping to learn the sex of the baby and surprise her husband with the news. But in addition to learning the sex of their baby, Thomas learned their baby had spina bifida.

“I get to my appointment, I was 17 weeks along, I remember the ultrasound taking over an hour, I actually fell asleep,” she wrote for the Spina Bifida Association. “The tech asked me if my doctor was concerned about my iron or had raised any concerns about my pregnancy. By the end of the appointment, I found out we were having a girl. I was super excited. My grandmother had passed away earlier that year and we said we’re going to name our baby after her if it was a girl.”

Thomas stopped by a store to buy an “It’s a girl” card for her husband and balloon for her mother. When she stopped at her mother’s house to pick up her son, her mother saw the balloon and cried tears of joy. That’s when Thomas’s phone rang.

“While she is celebrating, I start receiving calls from a blocked [unknown] number,” she explained. “By the third or fourth call, I finally answered it. It felt like time stood still. The doctor tells me he received notification that I got an ultrasound and there appeared to be severe brain and spinal damage.”

The doctor had determined that baby girl Taylor had Myelomeningocele, considered the most severe form of spina bifida. He advised Thomas to have an abortion because he felt Taylor may have what he considered a poor quality of life.

“It was like all the air left my body,” said Thomas. “I did the worst thing ever and I went to Google. It was like every picture that popped up confirmed what he said.”

Thomas called her husband and asked him to come home from work. His reaction changed everything. “[…] I will never forget his simple words, ‘This doesn’t change anything, we still will love them.’ He was so sure and strong,” she recalled.

READ: Mom of daughter with spina bifida: ‘Our journey was always in God’s hands’

Thomas spent the night crying and researching, but she stumbled upon a blog about a little boy named Grayson, who also had spina bifida. “He was the cutest little boy I had ever seen and had a bright smile,” she said. “I knew that in that moment that we were going to be okay. I don’t think any parent ever forgets their ‘D Day’. This journey has not been easy but I would do it all over again.”

Hospitalizations and surgeries have not stopped Taylor from living an amazing life. She is now eight years old and though she has faced bullying from other children, she doesn’t let it get her down. She even started her own nail polish business. “It’s not always easy,” Taylor said in a video for this month’s Spina Bifida Awareness Month. “But I’m awesome. I’m loved. I’m supported. So what, I do stuff different. But I get the job done. Nothing can get in my way.”

Her mother agrees. “Despite all of the challenges Taylor faces, she is amazing and her smile can warm the coldest heart,” she said. “Taylor is my hero.”