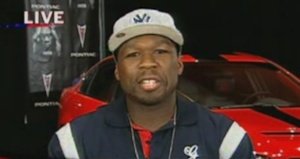 As I’ve said before, college was an interesting time for me. Something as mundane as a birthday party could take on a whole other ambiance, as happened one night when the celebrants ditched the traditional singing of “Happy Birthday” in favor of chanting along to “In Da Club” by 50 Cent. Although the lyrics really had nothing to do with a birthday party, the song’s opening lines did offer a fairly accurate summation of the night’s activities.

Balloon animals were not on the agenda.

“In Da Club” can be found on the album Get Rich or Die Tryin’, but that title could easily serve as Planned Parenthood’s slogan, too. Now, there’s relatively little danger of Planned Parenthood’s leadership actually dying; they prefer to force those in the womb to do that (and, apparently, those who have recently left it, too). However, like “Fiddy,” they’ve shown a willingness to take major risks to get what they want. What they want is to provide as much access to abortion as possible while completely disregarding any of the associated consequences. And, like Fiddy, they’ve found plenty of success when it comes to achieving their goals.

Under federal law, those who engage in child sex-trafficking face a life sentence. So, it’s fair to say that the U.S. government considers underage prostitution to be a serious matter. As for Planned Parenthood – not so much. In 2011, former clinic director Abby Johnson and six other ex-employees leveled multiple allegations against the abortion giant, including that it has failed to notify authorities when there is evidence that a minor is being coerced into aborting her child. Of course, you don’t have to take Johnson’s word that this happens: you can watch it for yourself.

In 2011, Live Action produced footage of one former Planned Parenthood staffer, Amy Woodruff, who not only failed to report requests for coerced abortions – she actually offered to arrange them. When visited by individuals who openly portrayed themselves as pimps seeking involuntary abortions for child prostitutes who “don’t speak English” and “aren’t going to know what’s going on,” Woodruff referred them to a facility that would accommodate their wishes, explaining that “if they’re 14 and under just send them right there if they need an abortion, ok?”

Planned Parenthood doesn’t just take chances with the employees it hires; it also chooses to associate itself with “doctors” who don’t shy away from risks, either.

It is to be expected that an industry built around ending lives is going to leave some dead bodies in its wake. Well, a lot them, actually. But what you might not expect is that some of those bodies have belonged to patients. Dr. LeRoy Carhart, for example, had two women die after he treated them. The first was Christin Gilbert, a young woman with Down syndrome who died following a botched late-term abortion in 2005. The second, Jennifer Morbelli, met a similar fate in 2013. In a video recorded by a Live Action volunteer, Carhart casually denied that Gilbert was his patient. That Carhart would take a glib approach to such things shouldn’t be surprising. After all, this is the same man who likens killing a pre-born baby to cooking “meat in a Crock-Pot.” And speaking of meat…

Two Delaware nurses, Jayne Mitchell-Werbrich and Joyce Vasikonis, came forward in April 2013 with tales of a “meat-market” atmosphere in the Planned Parenthood clinic where they worked. This included blood-covered tables, doctors who didn’t bother to wear gloves, and injured patients being rushed to the hospital. All this was evidently due to the facility’s drive to see as many women as possible. While the allegations are unquestionably disturbing, I have to take issue with the meat-market comparison: as someone who has spent a good deal of time in the meat markets of South Korea, I can say that I never saw anything approaching what these women describe.

And then there’s Planned Parenthood’s risky approach to money. Every year, the organization receives hundreds of millions from the U.S. taxpayer. What it does with all of these funds isn’t entirely clear. In 2013, the Government Accounting Office began looking into Planned Parenthood’s finances after claims emerged that the group has misappropriated as much as $100 million in federal money. This comes on the heels of a settlement in which Planned Parenthood had to pay out $4.3 million following accusations that it had defrauded the U.S. government as well as the state of Texas.

Why has Planned Parenthood been willing to take so many chances? Probably because the abortion giant has friends in Washington who shield it from consequences. When Rep. Cliff Sterns (R-FL) called for an investigation into whether Planned Parenthood was aiding sex-traffickers, his effort was condemned as a “witch-hunt” by Richard Blumenthal and 10 other Democratic senators. No matter what misconduct is alleged, Planned Parenthood can also count on lawmakers like Sen. Kay Hagan of North Carolina to keep the checks flowing. And although they voice ample support for the “right to choose” when they hit the campaign trail, these lawmakers are oddly quiet about Planned Parenthood’s misdeeds.

Planned Parenthood may face little in the way of negative consequences, but others are less fortunate. Among them are the taxpayer, who watches her or his hard-earned dollars get funneled away. So too are the victims of coercion and abuse that Planned Parenthood performs involuntary abortions on. And of course we can’t forget those who were either waiting to be born or recently delivered, only to have their lives stolen from them.

It’s said that all good things must come to an end. If that’s true, then there is surely no reason why a habit of getting away with aiding abusers, killing people, and defrauding the taxpayer shouldn’t be brought to a close, too. Consequences for Planned Parenthood are long overdue, and it’s time that America had leaders who can deliver them.