Carhart was one of four late-term abortionists featured in a film celebrated at the Sundance Film Festival, After Tiller. The film neglected to mention Carhart’s troubled past, which includes over two decades of complaints against him and, at the time, one dead patient.

Live Action’s investigators spoke with Carhart at his clinic in Bellevue, Nebraska. In addition to laughing and joking about brutally murdering an unborn child, Carhart mentioned both of the patients he has killed: Christin Gilbert and Jennifer Morbelli. Instead of giving our investigators the facts of these tragic deaths, though, he lied. Carhart claimed that the death of Jennifer Morbelli was caused by pregnancy complications, and not his botched abortion, which is a patent lie.

In addition to being completely unavailable to Morbelli, her family, and the medical professionals trying to save her life, Carhart was indeed found to have botched the late-term abortion he performed on her. Morbelli suffered a ruptured uterus, and bled to death internally after amniotic fluid seeped into her bloodstream, making it impossible for her blood to clot. None of this was mentioned to the investigator, of course.

But what of Carhart’s other patient, Christin Gilbert?

Christin was a young woman with Down syndrome, a Special Olympian who loved sports and earned a gold medal in the softball throw. Sometime in 2004, Christin was sexually assaulted and became pregnant. This led her to the Women’s Health Care Services in Wichita, Kansas – the clinic owned and operated by George Tiller, and where LeRoy Carhart was employed at the time.

In the Inhuman video, Carhart completely denies Christin was even his patient, saying,

We haven’t even – I’ve never had to send anybody to the hospital with my patients, so. Yeah, and the Christin Gilbert thing on the internet is a – was not my patient.

This is another blatant lie. What happened to Christin Gilbert at the hands of LeRoy Carhart is nothing short of horrifying. 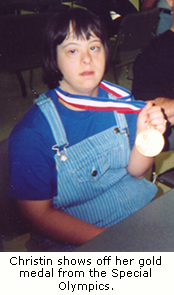 Christin’s baby was given a fatal shot of digoxin to the heart, and Christin’s cervix was then filled with laminaria. She and her family were then sent to a hotel about a mile away. The next morning, Christin delivered her dead child in her family’s van on the way to the abortion clinic. A D&C procedure was performed, and a tear on her uterus was found and sutured. Carhart then administered the drug RU-486, which is not approved for use in late-term abortions. But Carhart apparently wanted an “insurance policy”. Christin and her family were then sent back to their hotel again.

Within 24 hours, Christin’s condition began to deteriorate. Sepsis was sweeping through her body, but she was diagnosed with dehydration and simply given fluids. The staff made no documentation of this, and Christin and her family were sent away again.

That evening, Christin began vomiting, fainting, and bleeding. Sometime between midnight and 4am, Cathy Reavis, an unlicensed nurse, showed up at the hotel to “assist” the family and placed Christin into a warm bath and then called Carhart. He never responded, and never came to the hotel – despite the fact that Christin’s condition was rapidly getting worse.

The next morning, Christin fainted, and could not be revived. They took her to the abortion clinic (likely as instructed), where she awakened before collapsing again and becoming unresponsive. Clinic staff called 911, but refused to tell dispatchers the nature of the emergency, which caused EMS personnel to assume there was no urgency. When paramedics arrived, Christin was lying in “huge amounts” of blood and fluid. Carhart was on top of Christin, physically trying to force fluids from her stomach. Christin eventually died from her injuries.

At the hospital, Christin was found to be bleeding from every orifice in her body. Her body was so ravaged by sepsis and infection that her organs were unable to be donated. Her death was quickly swept under the rug.

Christin’s death received nowhere near the media attention that Jennifer Morbelli’s did. This was a woman who suffered for days at the hands of LeRoy Carhart, and it barely made a ripple in the national news cycle. Christin Gilbert has turned into Carhart’s forgotten victim.

Jennifer Morbelli was a young, pretty, married teacher. Is that why her death was so much more shocking and garnered such nationwide outrage, while Christin’s was ignored? She was a teenager, only 19, and had Down syndrome. Does that make her disposable to us? Someone who can be forgotten and whose death can be ignored?

Most appallingly, Carhart is now denying to our investigator that he even treated her. Apparently, her death is forgettable to him as well.