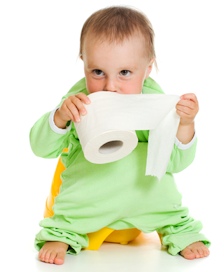 There are many things that can lead to confusion. Possible causes include misunderstood directions, a label that wasn’t read, or a handful of off-white pills that you got at a Korean pharmacy. I’m about to address all three examples.

I spent two memorable years living in Suwon, South Korea (where all good stories have their beginning). While I gained an appreciation for bulgoggi (seasoned beef), I never did pick up much of the language. Similarly, many of Suwon’s older residents have yet to catch on to the Queen’s English. This wasn’t usually a problem, however, since, like a lot of Wei-guk-in, I found that I could get by with hand gestures and non-threatening smiles. The shortcomings of this approach became all too apparent one day when I tried to apply it to the Korean medical system. 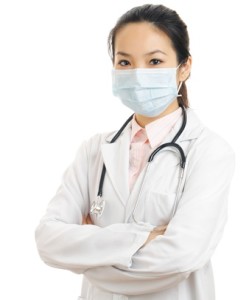 That was the wrong time to smile and nod.

My employers had a curious attitude when it came to illness. Taking the day off from work was frowned upon, but I was encouraged to go to the hospital for any and all ailments. And so it was that I found myself in a doctor’s office attempting to explain my flu-like symptoms via pantomime. The physician was clearly putting a solid effort into trying to understand me, but judging by his frown and repeated head-shakes, I could tell that my improv skills just weren’t getting the job done. Thankfully, we weren’t alone in this endeavor, as three nurses had been summoned to help translate.

After some back-and-forth, it appeared that a diagnosis had been reached and I was to get a prescription. The nurses each repeated the number “four” and motioned as if they were swallowing pills, which I took to mean that I should ingest four of whatever it was that they were giving me. The pharmacist seemed to confirm these instructions, so I promptly went home and popped four unknown pills before walking out to the grocery store.

Later, I discovered that “four” actually referred to the number of days that my prescription was to last. I also found out what the pills contained: codeine. Lots of codeine.

I began to suspect that something was amiss when my feet started getting lighter. This was followed by an oddly euphoric sensation. I’m also pretty sure that I was developing the glassy-eyed look of someone who’s had one too many bottles of soju. Inside, however, I was beginning to fear that I had overdosed on the wrong prescription and was now about to drop dead on a random street corner in East Asia. The fact that I had yet to acquire a phone and thus had no means of calling for help wasn’t exactly comforting, either. These feelings all congealed into sort of a slow-motion panic. It was a feeling of terror, but I was feeling it through a warm, dopey haze.

The point of this story isn’t to glamorize drug use, for indeed, there is nothing glamorous about a stoned, panicky white person stumbling down a Korean sidewalk. Rather, it is to illustrate how getting the facts wrong can lead to a confused outcome. That principle isn’t limited to prescription drugs; it applies to the the abortion debate, too.

As anyone who has been involved with the pro-life movement knows, we tend to attract hateful comments. Some are old standbys, such as “Your mom should have aborted you.” These words are invariably sneered out with a look of smug satisfaction, as if the speaker is somehow convinced that he or she is the first one clever enough to think of them. There is something almost adorable about this level of naïve cluelessness. It’s like listening to a small child who seems to think that learning to use the toilet without assistance has transformed him into a veritable god among men.

Look on my works, ye Mighty, and despair!

Other times it’s not entirely clear if a negative comment is really motivated by blind hatred or if the speaker is just confused. For example, consider this:

The premise behind bro-choice is simple: being able to talk a woman into having an abortion means not having to support your child, which reduces the risks associated with “getting laid.” Nils Parker summed up this attitude when he said, “Any procedure that can erase a massive lapse in judgment while at the same time saving hundreds of thousands of dollars and no fewer than 18 years of responsibility for the welfare of another human being, and can be performed with what amounts to a Black & Decker wet/dry vac from your local Home Depot – that’s a procedure from which I can derive countless hours of entertainment.”

While abortion may help provide entertainment for Nils, it also tends to offer a gruesome death for the one being aborted. When done in the first trimester, it usually involves vacuum aspiration (i.e., getting sucked out of one’s mother through a tube). This isn’t an option for disposing of a more developed child, though. That’s why a later-term abortion typically calls for a dilation & evacuation, which consists of taking a set of forceps and pulling the child apart one chunk at a time. 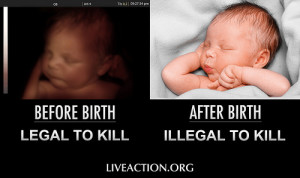 OK, this isn’t directly tied to the paragraph – I just thought it was cool.

Given the indifference that a lot of male abortion proponents show towards the lives of their children, it stands to reason that they would treat their female targets with a similar measure of depravity. On this matter, they are at least consistent.

Writer Christian McQueen blessed society with his “10 Slut Commandments,” which serves as a how-to guide on using and denigrating women. After reviewing the various methods of exploiting a woman’s insecurity and emotional pain for your own advantage, he then explains how it’s important to take “a slut” in for an abortion should she have the gall to get pregnant on you. The website that Christian writes for, Return of Kings, features another fellow by the name of Emmanuel Goldstein. He generously offers advice on “5 Ways To Bully Fat Sluts On A Date” and instructs men to “Act As If Every Girl Is A Slut” (or a “whore,” “bitch,” or “skank”). When it comes to dispensing misogynistic wisdom, these men truly know how to give. 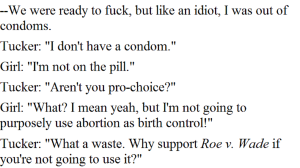 I admit that the logic behind calling a woman names because she’s been kind enough to have sex is somewhat mysterious to me. What’s not mysterious is the logic that another contemptible group applies to abortion. Child abusers understand that it’s an option they can use to remove evidence of their crimes – and use it they do.

John Blanks, Jr. brought his daughter to Planned Parenthood for an abortion after getting her pregnant. Adam Gault made use of their “reproductive health services” as well – Planned Parenthood turned his teenage victim back over to him when they were done vacuuming out his child. Other victims have taken legal action against the abortion provider when Planned Parenthood similarly aided their abusers. Finally, seven former Planned Parenthood employees (including ex-clinic director Abby Johnson) wrote an open letter to Congress that outlined how the abortion giant fails to protect victims of abuse and sexual trafficking.

How do pro-lifers show contempt for women? The answer is “not very well.” A lot of our efforts revolve around providing food, diapers, and parenting skills to new moms in need. We also try to help those who are seeking to provide an adoptive home to a baby who could use one. As for what we’ve been legislating recently, much of it has involved stopping abortions after 20 weeks of gestation. While we’re in favor of protecting all children, keeping them from getting torn up after they can feel pain has been a special priority.

If Jose wants to see what denigration looks like, he’s going have a hard time finding it at Live Action. He would be better off listening to what some of his fellow abortion supporters have to say. That might clear up his confusion.