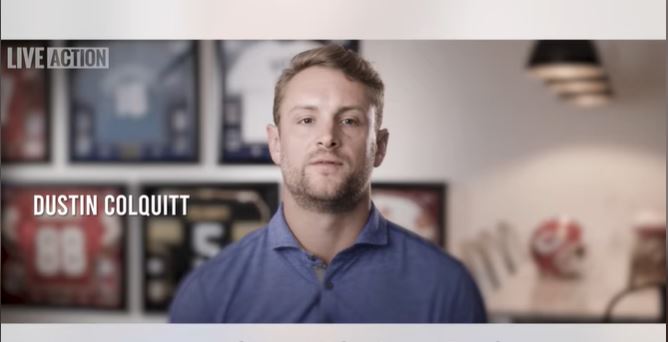 In a new video released by Live Action, former Kansas Chiefs punter Dustin Colquitt is speaking out against abortion — specifically the recent decision of the Kansas Supreme Court to erroneously find a right to abortion in the state constitution.

“[L]ast year, the state Supreme Court decided for the very first time in 160 years, that there’s a fundamental right to abortion,” Colquitt said. “And even though they completely invented this, it’s a decision that threatens all of our progress in protecting the preborn.”

Remarkable! Former Kansas City Chiefs player Dustin Colquitt urges his state—and our nation—to end abortion and defend our most vulnerable American children."I'm raising my voice on behalf of the voiceless, and I invite you to do the same."

Colquitt, who played for the Chiefs for 15 years and won the Super Bowl in February 2020, said he loves living in the state with his young family, but he also “fears what’s happening” there with abortion. “Previously, we’d made lots of progress to protect our women and our children, specifically our children in the womb,” he said. “And as a father of five children myself, I think it’s insane that killing babies through abortion is legal at all.”

Colquitt explained that the annual number of abortions in Kansas has declined by an astounding 44% in the last 20 years. Insurance plans in the state don’t cover abortions, and taxpayer dollars do not fund the abortion industry within the state either. Five years ago, Kansas became the first state to ban cruel and inhumane D&E dismemberment abortions, in which preborn children, capable of feeling pain, are killed when their limbs are ripped from their bodies.

The decision by the state Supreme Court threatens to undo the good work that has been done to help women and save babies, and will have long-term, far-reaching consequences. “This means that we could be looking at tax-funded, insurance-funded abortions for all nine months, for any reason, on girls of any age,” Colquitt explained. “And that could be the case in Kansas even if Roe v. Wade is overturned.”

That’s because if Roe v. Wade is overturned, the decision on whether or not abortion is legal will return to the states. Since Kansas now claims abortion is a right given in the state constitution, abortion would remain legal there, regardless of the overturning of Roe v. Wade and since it is considered a right, it would be limitless — no restrictions.

As the father of four sons and one daughter, Colquitt said it “horrifies” him that the abortion industry could “prey” on his daughter one day, committing an abortion on her using coercion, and he and his wife would never know about it. “This is not who the people of Kansas are,” he said.

Because of the state Supreme Court’s failure to protect the “equal and inalienable natural rights” of “all men” as they claim they are doing, Colquitt is urging others to speak out with him.

“I’m raising my voice on behalf of the voiceless, and I invite you to do the same.”