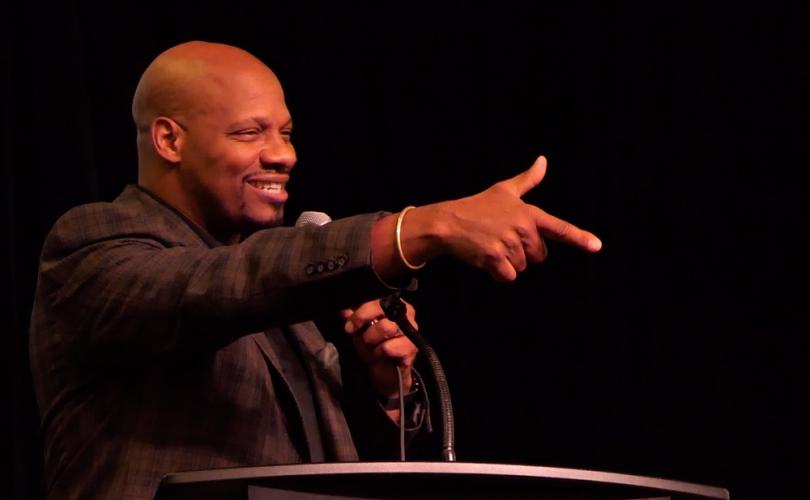 (LifeSiteNews) – Former professional American football (NFL) player Steve Fitzhugh revealed this week how he was almost aborted by his mother in 1962.

The former safety for the Denver Broncos (1986–87) told young people at the May 9 Youth Banquet following the National March for Life in Ottawa, Canada how he grew up in a toxic family atmosphere of violence, promiscuity, alcohol and drug abuse, and divorce.

Fitzhugh, 56, explained how his mother almost aborted him during the breakdown of his parents’ marriage. His mother was lying on a hospice bed dying of multiple cancers when she told him the story for the first time.

“Your Dad and I had three kids,” Fitzhugh related about his Mom’s dying words. “It was apparent that we were growing apart and we were going to get a divorce. Somewhere in the making-up and breaking-up I got pregnant again.”

“There was no way I was going to raise these three kids and a baby on my own. So, I made arrangements to take care of my situation,” Fitzhugh’s mother said, as he related it.

Fitzhugh said that what his mom told him next is all the more astonishing because she was not really a “religious woman,” although she “feared God.”

“Something told me, ‘By faith…keep this baby,’” Fitzhugh related.

“And that’s why, as a former fetus, I oppose abortion,” he told the crowd of hundreds of young people as they applauded and cheered.

READ: ‘Moana’ Disney star could have been aborted, says ‘Keep your babies’

“I was just a few hours away from losing my chance,” he said.

“I’m just so glad that she gave me breath, that she let me live, so I could have a chance of a lifetime, and I’m doing the most with my chance,” he said.

While Fitzhugh was with the Denver Broncos for only two seasons, being sidelined due to a shoulder injury, this did not stop him from pursuing other dreams, including coaching, getting married, and now pursuing a doctorate (Ph.D.) in education.

The Christian speaker and bestselling author now travels around the world, addressing thousands annually with a message about making positive choices in life.

Fitzhugh co-founded “The House,” an after-school teen drop-in center in Washington, D.C. that at one time partnered with the Capitol Hill Crisis Pregnancy Center. He developed a school drug and alcohol prevention and cessation program. He also launched PowerMoves to coach listeners to “success and significance” through his talks. He is also the national spokesperson for the Fellowship of Christian Athletes’ “One Way 2 Play — Drug Free” program.

Fitzhugh challenged the young people in his talk in Ottawa, asking them what they are doing with their chance at life.

When asked if he has any dreams he still wants to accomplish, Fitzhugh responded: “I want to live my life in such a way that my legacy is still impacting lives long after I’m hanging out with Jesus on the other side.”

“That’s my goal — to have an audience of one, to live a life pleasing to my heavenly Father who will one day say, ‘Steve, well done my good and faithful servant, YOU’S MY BOY!”